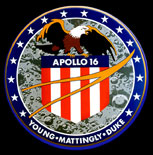 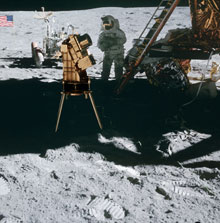 Apollo 16: Scouting the Lunar Highlands
By Griffith Observatory Astronomical Observer Anthony Cook
On April 20, 1972, Apollo 16 Commander John Young set the Lunar Module Orion down in the Moon’s Descartes Highlands. Over the next three days, Young and Lunar Module Pilot Charles Duke explored the site with the aid of a two-seat electric Lunar Roving Vehicle. Command Module Pilot Ken Mattingly studied the Moon from the orbiting spacecraft Casper. What the astronauts discovered turned out to be very different from what was expected, and the expedition resulted in a vastly improved understanding of our Moon. Join Griffith Observatory Astronomical Observer Anthony Cook for a detailed account of the historic mission. 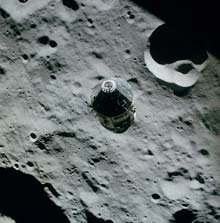 The Moon Landings: Hoax or No Hoax?
By Griffith Observatory Astronomical Lecturer Dr. David Reitzel
Were the missions to the Moon real? Did men really fly to the Moon and drive around on its surface, or was it all a hoax? In the words of one astronaut, if it were a hoax, “Why would we fake it nine times?” Join Griffith Observatory Astronomical Lecturer Dr. David Reitzel for a review of the evidence and decide for yourself.