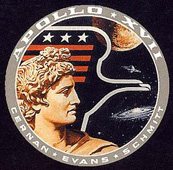 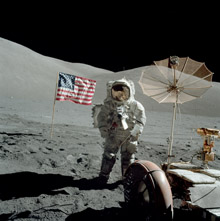 Apollo 17: The End of an Era
By Griffith Observatory Astronomical Observer Anthony Cook

On December 11, 1972, Apollo 17 Commander Eugene Cernan set the Lunar Module Challenger down in the Taurus Littrow valley of the Moon, the last landing of the Apollo program. Over the next three days, Cernan and Lunar Module Pilot (and geologist) Harrison Schmitt explored the site with the aid of a two-seat Lunar Roving Vehicle. Command Module Pilot Ronald Evans studied the Moon from the orbiting spacecraft America. The astronauts made important scientific finds including the oldest Moon rock, orange soil from lunar volcanic fountains, and material from the Moon’s most recent large impact. 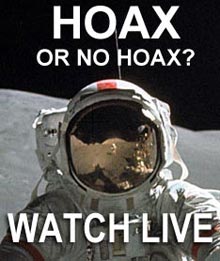 Were the missions to the Moon real? Did men really fly to the Moon and drive around on its surface, or was it all a hoax? In the words of one astronaut, if it were a hoax, “Why would we fake it nine times?” Review the evidence and decide for yourself.

Click here to watch “Hoax or No Hoax” on Griffith TV on Live Stream.