What is Comet ISON

Comet ISON (C/2012 S1) was discovered on 21 September 2012 by Vitali Nevski and Artyom Novichonok while collecting data for the International Scientific Optical Network (ISON). The comet has generated a storm of excitement and controversy. When it was found, the comet was relatively bright for an object beyond the orbit of Jupiter. Its projected orbit showed that it would skim the Sun’s surface in November, 2013. The similarity of the path first calculated for the comet to the orbit of the Great Comet of 1680 (brightest comet of the seventeenth century) indicated the possibility of a family connection. All of these factors led some astronomers to predict that ISON would outshine the full moon by a factor of more than 100! Many proclaimed comet ISON would be the “Comet of the Century!”

Subsequent refinement of comet ISON’s orbit, however, shows that there is no connection with the 1680 comet. The orbit suggests instead that comet ISON comes from the Oort cloud of comets that lies far beyond the orbit of Neptune, and that it has never been close to the sun before.

High expectations for comet ISON were reversed in some quarters in summer, 2013, after its brightness failed to keep pace with predictions for six months. Some regarded the comet’s diminished development as evidence that its death was imminent. In the meantime, however, comet ISON, unaware of our expectations, began to brighten again, but at its own pace.

While nothing can ever be certain about a comet that has never been observed passing this close to the sun before, here is what skywatchers might expect, based on current forecasts published by NASA and various comet experts: 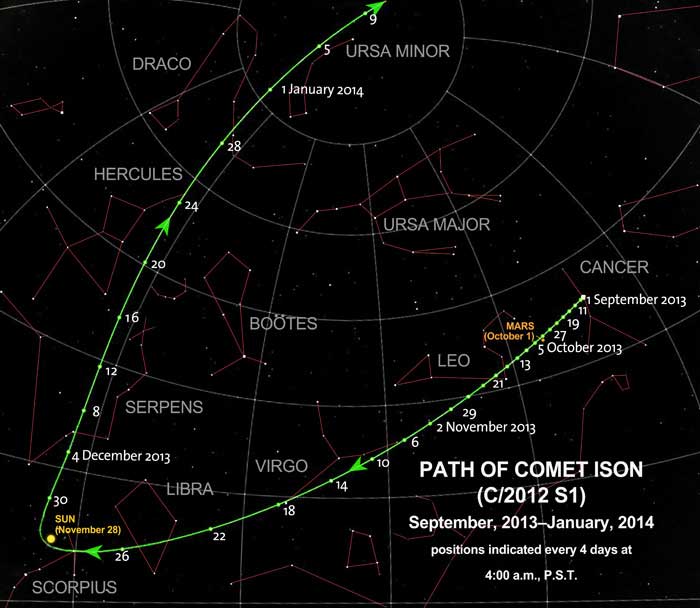 Comet ISON should appear through telescopes at magnitude 10 and only slightly less than 2 degrees north of the orange planet Mars. Both are in Leo the Lion. Although comet ISON is still 199 million miles (2.14 AU) away from us, it is only 6.5 million miles from Mars, close enough to be seen with the unaided eye by an astronaut on Mars. There are no Martian astronauts yet, but NASA does have two rovers there, Curiosity and Opportunity. They and the orbiting Mars Reconnaissance Observer will attempt to observe the comet from the Martian surface and from orbit. During the encounter, the moon will be only 10 ½ degrees to the lower right of Mars in our sky. Its thin crescent will not interfere with viewing. The comet may be visible through a 5-inch or larger telescope. Mars will outshine the comet by a factor of 10,000. Both objects are 28 degrees high at dawn.

During October, comet ISON should brighten from magnitude 10 to 9.6, and be accessible with a 4-inch telescope. ISON and Mars appear to travel east together, and they come within a degree of each other on the 16th. An interesting “photo-op” for those equipped with tracking equipment and a telephoto lens occurs on the 14th, when Mars is 1 degree north of Leo’s bright star Regulus and comet ISON is 1.1 degrees north of Mars.

Although a bright moon is present, astro-imagers will not want to miss the grouping of comet ISON with the a of Messier galaxies–M95, M96, and M105 in Leo the Lion. This grouping fits in within a 2½-degree field of view. By this time, the comet should be magnitude 8, and the moon is a narrow crescent.

Comet ISON should brighten from magnitude 8 to 5.6, and come within the reach of binoculars and possibly the unaided eye. The comet moves from Leo the Lion to Virgo the Maiden on the 5th. The path of the comet, along the ecliptic, is taking it lower and lower in the east-southeast each morning. A tail, if present, should stream straight up. Between the 2nd and 15th, at the start of dawn, the comet’s altitude declines from 32 degrees to 17 degrees.

November 16−22: in moonlight before dawn

Unless comet ISON is much brighter than magnitude 3, as predicted for these dates, observing the comet may be very difficult or impossible as it approaches the sun in the bright light of dawn. On the 5th, the comet will be located 5 degrees to the lower right of Saturn and Mercury.

Comet ISON is closest to the Sun and brightest at 10:26 a.m., P.S.T., on November 28th. It will then be 728,000 miles from the Sun’s surface and could become many times brighter than the planet Venus. If it does, there is a chance that the comet could be visible in broad daylight, next to the Sun. The Sun, however, makes this kind of viewing potentially hazardous for a number of reasons. This diagram shows how the position of comet ISON changes during the day with respect to the sun. The diagram’s bottom edge is parallel to the horizon. The comet is lower than the sun and less than one solar diameter distance from the sun until about noon. It then swings higher above the Sun through the afternoon. If the sky is very clear, it may be possible to find the comet in the afternoon, as long as the observation is made in the shadow of a building. If your binoculars or telescope is in the shadow, there will be no possibility of sunlight directly entering your instrument. If the sky is hazy however, the sky’s brightness may overwhelm the light of the comet.

After a close shave with the sun, comet ISON may reappear in the east before sunrise on November 30. If the comet’s nucleus survived, the comet will rise before dawn on December 6. Whether or not the main mass of the comet is destroyed when it passes the Sun, the debris blown off of it may form a long and brilliant tail, visible before dawn from November 30 through December 14. After that, bright moonlight may diminish the appearance of the fading tail.