A comet discovered on August 17, 2014, by Australian astronomer Terry Lovejoy has brightened just in time for prime-time viewing in Los Angeles. Through the rest of January, Comet Lovejoy (C/2014 Q2) is expected to remain bright enough to be seen through ordinary binoculars in spite of the glow of city lights. It is also visible to the unaided eye from wilderness locations free from artificial lights. 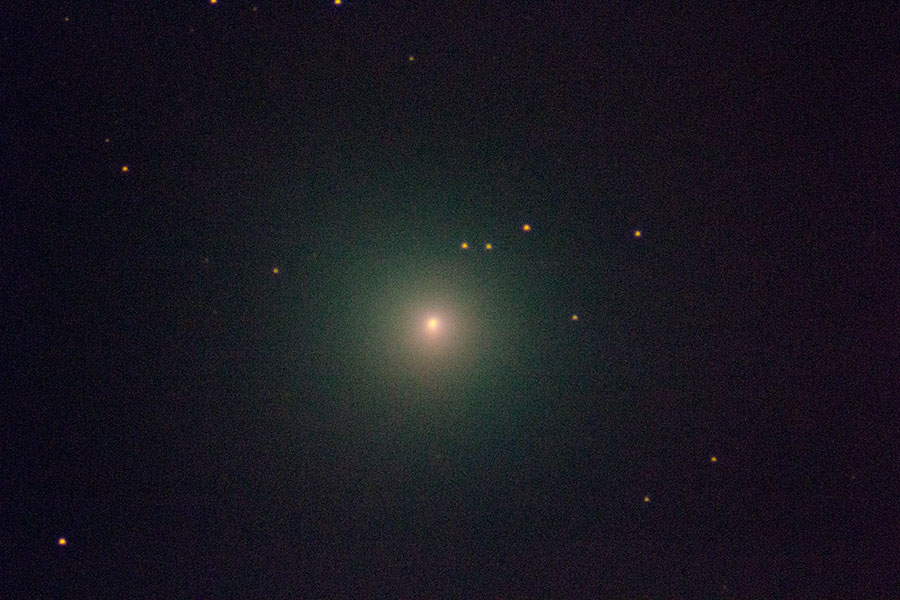 This image was made with the historic 12″ Zeiss telescope at Griffith Observatory by Astronomical Observer, Anthony Cook, January 5, 2015.

Comet Lovejoy is well placed for viewing during the first half of the night. Through January 11, it is between 10-20 degrees to the right of Orion the Hunter. It then glides to the west of Taurus the Bull, past the Pleiades star cluster on the 19th, and then moves into the stars of Andromeda the Chained Woman.

Photographs show the comet has a half-million-mile-wide green coma, or head. This tenuous atmosphere contains diatomic carbon and surrounds the comet’s invisible frozen nucleus. The comet’s blue tail is comprised of glowing ions of carbon monoxide carried away by the solar wind. Ion tails are difficult to see visually, so Comet Lovejoy will likely continue to appear as a fuzzy round cloud without a long tail.

The comet orbits the sun about every 14,000 years in a path that is inclined 80 degrees to Earth’s orbit. It is now between the orbits of Earth and Mars. It was closest to Earth, 44 million miles away, on January 7, 2015, and comes closest to the sun, 119 million miles, on February 1, before it heads out for another 7,000 years on a 110-billion-mile trip back to the far reaches of the Kuiper belt.

Griffith Observatory’s free public telescopes will be trained on the comet, weather permitting, between 7:00 p.m. and 9:30 p.m., Tuesday through Sunday, through January 24, 2015. 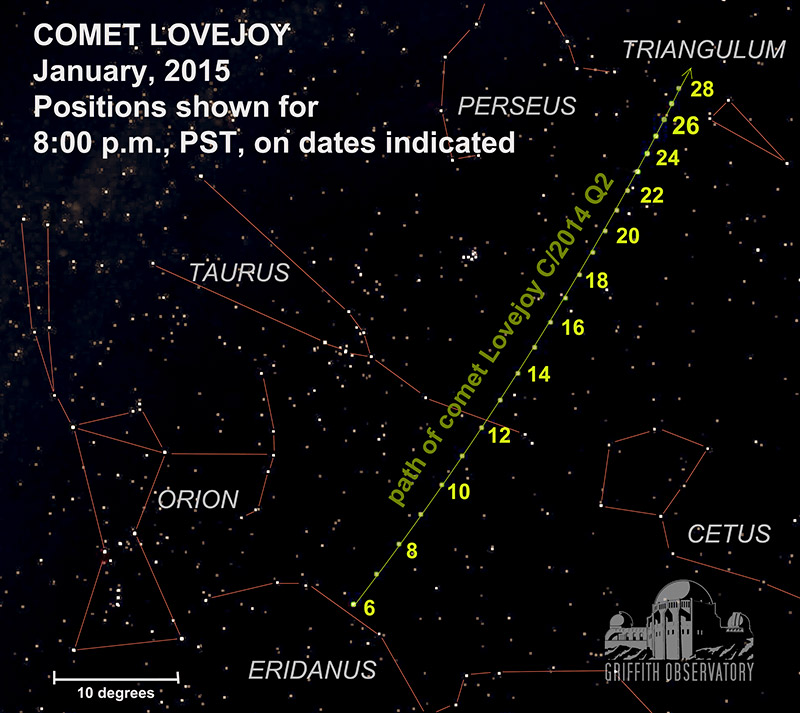