NOTE: Griffith Observatory and Griffith Park will be CLOSED during the observing periods.

The annual Perseid meteor shower will reach its peak between 6:15 a.m. and 6:45 p.m., P.D.T., on Monday, August 12, 2013. Interested viewers will not be able to see the peak from Los Angeles, where it will be daytime. The timing, however, will give southern Californians two chances to see the shower close to maximum strength:

WHEN TO OBSERVE: The observing period both nights starts at 11:00 p.m. and improves until dawn breaks at 4:40 a.m. The Moon will have set before this on both dates. The best time to observe is in the hour before dawn. Meteors appear as swift streaks of light that flash by in a second or less. The brightest meteors are called fireballs, which can be bright enough to cast shadows. Fireballs sometimes leave luminous clouds that can be seen for several minutes after the fireball itself disappears.

WHERE TO OBSERVE: In and around Los Angeles, the glow of city lights makes it difficult to see meteors, so expect to see fewer than 10 per hour. The best view of the meteor shower requires a trip to campground or wilderness areas 50 miles or more from cities. From these areas you can expect to see 60 meteors per hour, judging by Perseid rates in recent years. Fortunately, southern California has many suitable mountain and desert areas that can be reached in an hour or so of driving. If you do make a trip, be sure also to consult a detailed weather forecast to choose the best spot. 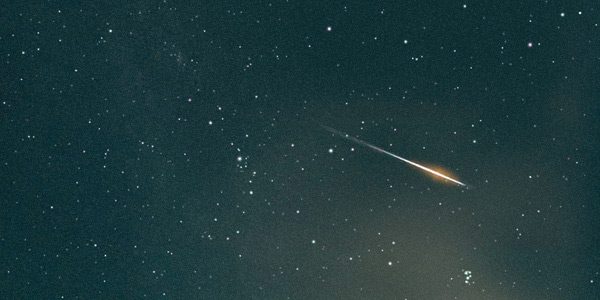 HOW TO OBSERVE: No special equipment is needed to watch meteors. You will see the greatest number if you can lie back and look up toward the northeast. A deck chair or chaise lounge is ideal for this. Warm clothes, a pillow, and a sleeping bag also add to comfort when watching for a long time. It is important to be dark adapted–do not expose your eyes to light for 10 minutes or more before you begin watching. Even a glance at a cell phone display can make you night blind for several minutes. Do not text and watch!

ABOUT THE PERSEIDS: Perseid meteors are named for the constellation Perseus, the hero of the ancient Greek legend of Andromeda. Perseids can appear anywhere in the sky but seem to stream from the direction of Perseus, which is in the northeastern sky during most of the night. The meteors are actually rice-grain- to popcorn-sized bits of comet dust, shed every 130 years from comet Swift-Tuttle (109P) when it passes by the Sun, as it last did in 1992. Over thousands of years, the particles spread out fairly evenly around the comet’s orbit and become visible when Earth crosses the comet’s orbit and the particles streak through our upper atmosphere at 37 miles per second. At such a high velocity, friction with our atmosphere causes the tiny particles to put on a spectacular show but destroys them at an altitude of 50 miles or more.