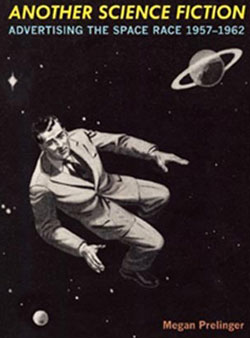 Russia’s 1957 launch of the Sputnik satellite shocked the world and lit a fire in America to get a man into space and onto the Moon. The space race was on, the aerospace industry was hot, and, according to Roger D. Launius, Curator of the National Air and Space Museum, “science fiction became science fact.” Aerospace industry ads pitched the idea that we lived in a moment where anything was possible—Mars and the Moon were the new western frontier; gravity was history, and soon so would be the confines of our solar system itself.

ABOUT THE AUTHOR: Megan Prelinger is a historian and a lifelong collector of space history ephemera and science fiction literature. She is co-founder and architect of information design of the Prelinger Library, a private research library open to the public, which houses more than forty thousand books and other print artifacts on North American regional and land-use history, media and cultural studies, and technology, including a space history collection. She is also a naturalist and rehabilitator of aquatic avian species. She lives and works in San Francisco.