Greeting visitors upon their arrival at Griffith Observatory, the Astronomers Monument is a large outdoor concrete sculpture on the front lawn that pays homage to six of the greatest astronomers of all time.

The monument is an enduring product of the great economic depression of the 1930s, when New Deal initiatives created federally-funded work programs to employ skilled workers at a time when they would otherwise remain idle and without income. One of the first of these programs, the Public Works of Art Project (PWAP), began in December 1933. Soon thereafter, in cooperation with the Los Angeles Park Commission, PWAP commissioned a sculpture project on the grounds of the new Observatory (which was under construction). Using a design by local artist Archibald Garner and materials donated by the Womens’ Auxiliary of the Los Angeles Chamber of Commerce, Garner and five other artists sculpted and cast the concrete monument and figures. Each artist was responsible for sculpting one astronomer; one of the artists, George Stanley, was also the creator of the famous “Oscar” statuette.

On November 25, 1934 (about six months prior to the opening of the Observatory), a celebration took place to mark completion of the Astronomers Monument, which had proven to be the most ambitious creation of the PWAP. The only “signature” on the Astronomers Monument is “PWAP 1934” referring to the federal agency which funded the project and the year it was completed. 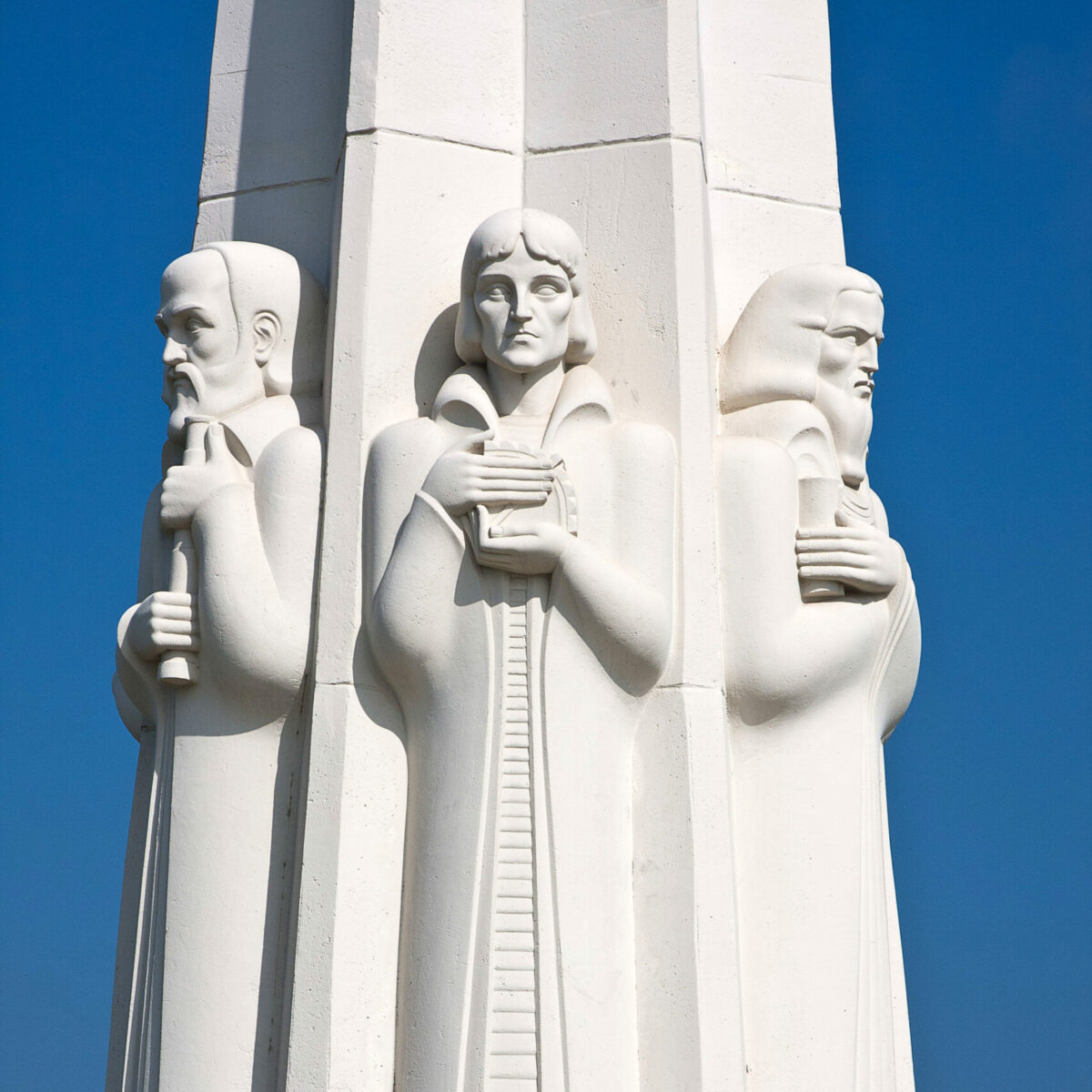 The six astronomers featured on the monument are among the most influential and important in history. The six figures represent the Greek astronomer Hipparchus (about 125 B.C.), Nicolaus Copernicus (1473-1543), Galileo Galilei (1564-1642), Johannes Kepler (1571-1630), Isaac Newton (1642-1727), and William Herschel (1738-1822). Albert Einstein was considered for inclusion, but planers ultimately decided it would be inappropriate to feature someone still alive (the monument was completed in 1934; Einstein died in 1955). 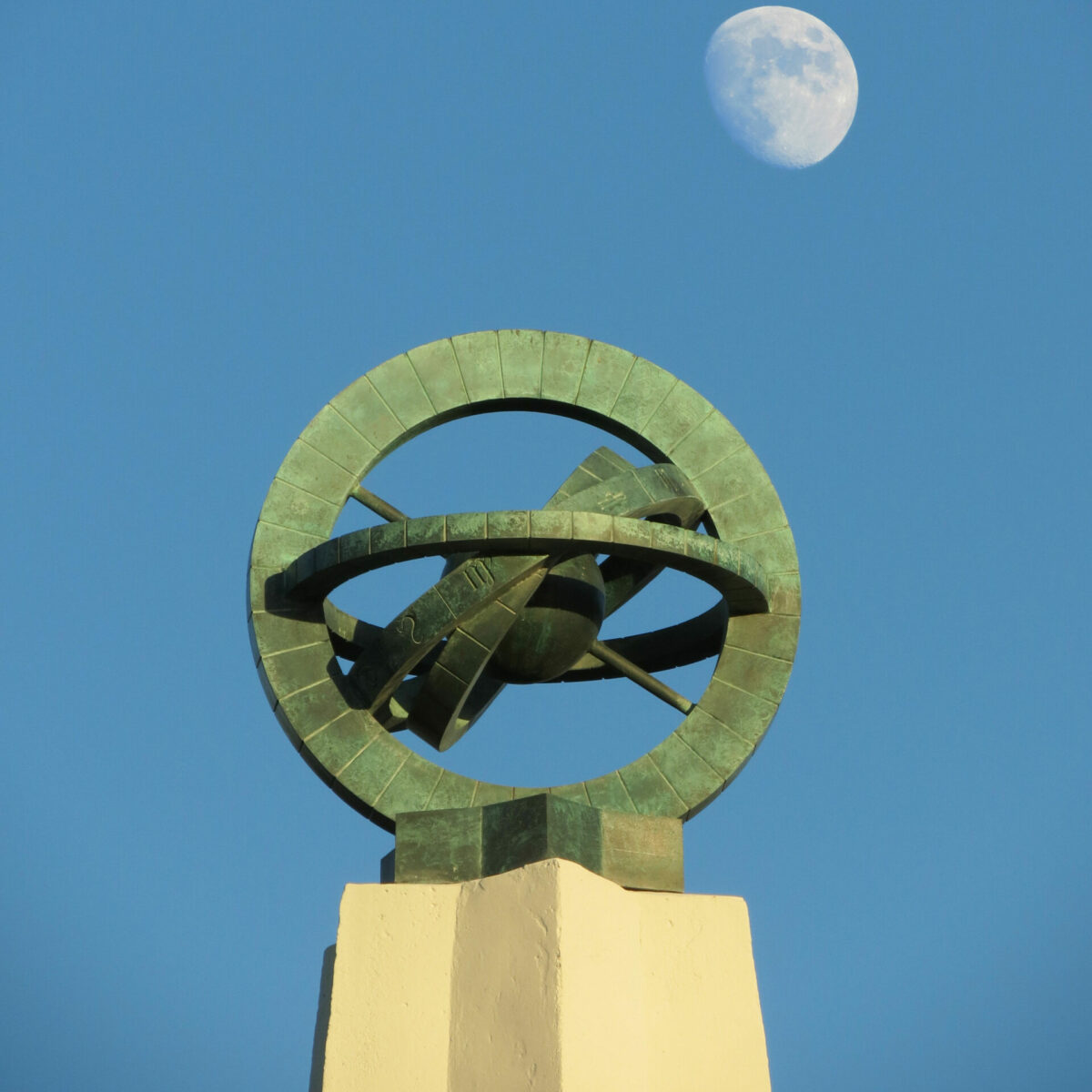 On top of the Astronomers Monument is a 900-pound, hollow bronze armillary sphere that was installed in 1991 (replacing the original cement-cast and copper-covered sphere which had degraded). An armillary sphere is an astronomical instrument composed of rings representing celestial latitude, longitude, and the ecliptic. Prior to the invention of the telescope, it was the main instrument used by astronomers to determine celestial position. 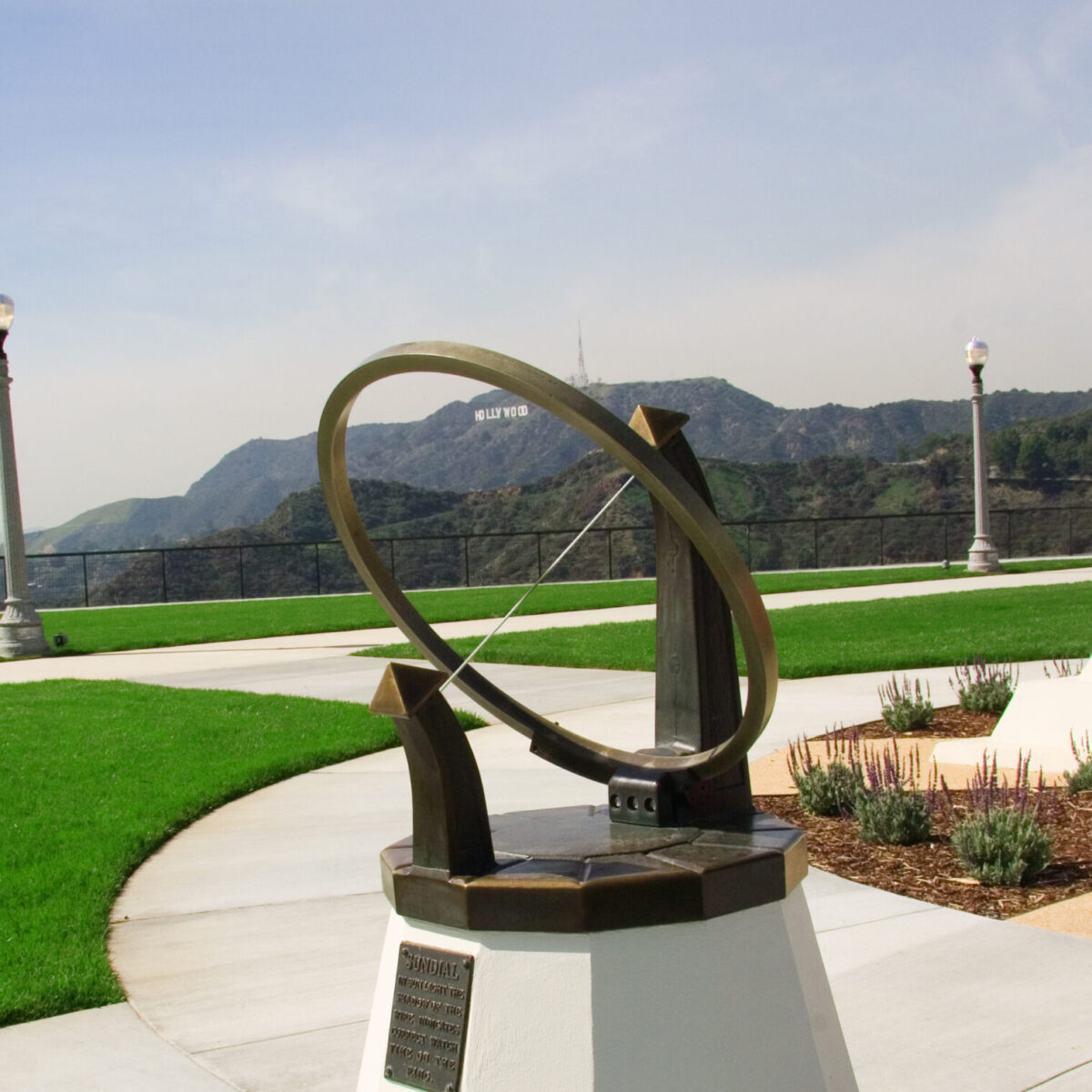 Our equatorial sundial was created and installed by Observatory staff (Leon Hall and Joseph Frame) in 1957. The ring is made of high-nickel bronze and has an outside diameter of 34 inches. Engraved markings on the ring allow one to track the movement of the shadow and, thus, to keep the time using the Sun. The ring is held in position by a clamp, which can be loosened to allow staff to rotate the ring when adjustments are needed (such as when Daylight Saving Time begins and ends). The heavy wire passing through the center of the ring, and at right angles to it, is made of a nickel-copper alloy. It is parallel to the Earth’s axis, being accurately mounted in a north-south direction and pointed to the north pole of the sky. The angle it makes with the horizon is 34 degrees, which is equal to the latitude of Los Angeles. The Sundial gives us a better appreciation of the role of our rotating Earth as the fundamental timekeeper. 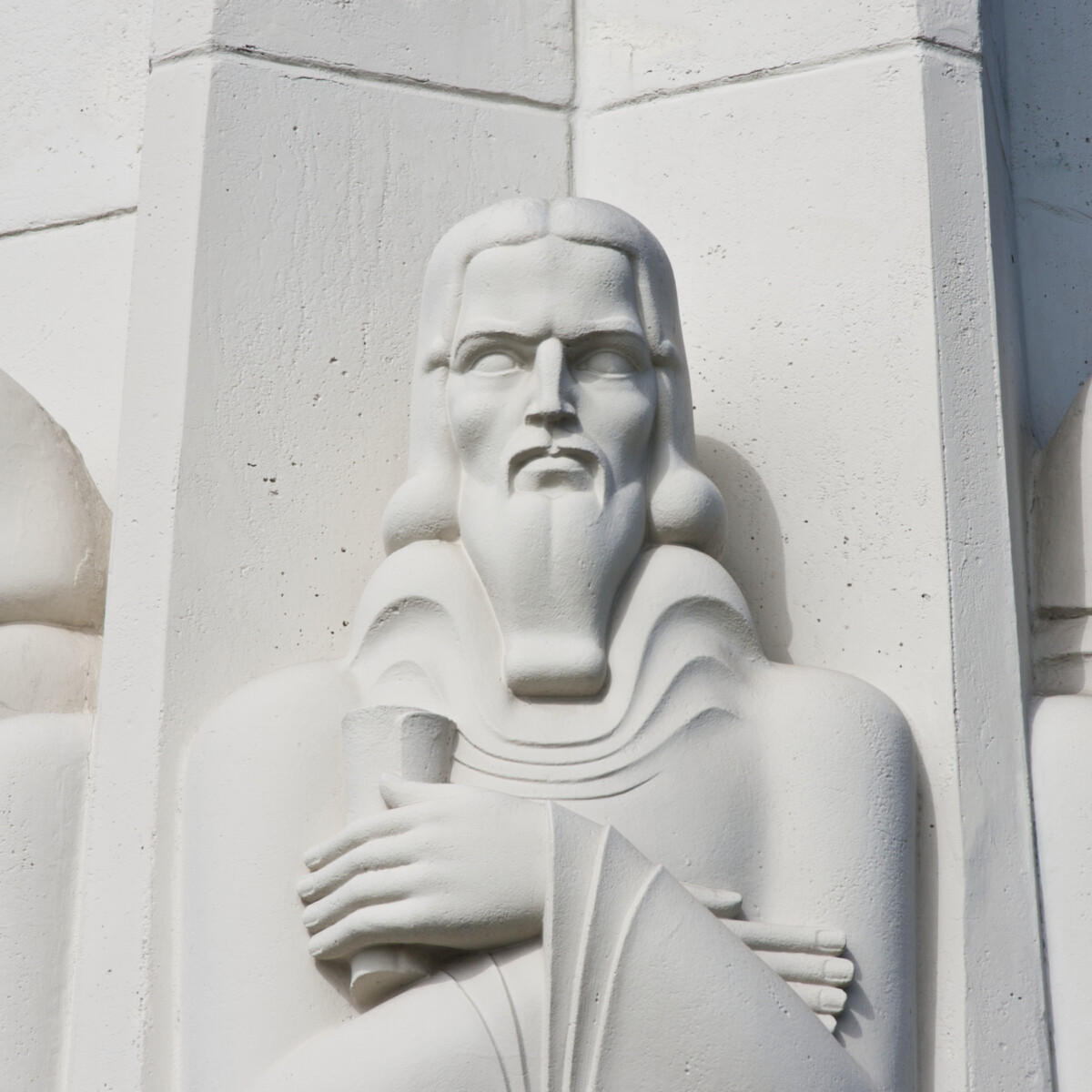 The greatest astronomer of antiquity was Hipparchus, a Greek who made observations on the Island of Rhodes between 146 and 126 B.C. His improved astronomical instruments enabled him to determine the places of objects in the sky with greater accuracy than had been attained before. He determined the length of the tropical year, the size and distance of the moon, the eccentricity of the sun’s orbit and, other important data of astronomy. His greatest discovery was that of the precession of the equinoxes, a slow movement among the stars of these intersection points of the sun’s path with the celestial equator. This discovery was the result of the comparison of his own observations with those made a century and a half earlier. He made a catalog of 1080 stars, which he divided according to their brightness into six magnitudes. His development of the subject of spherical trigonometry places him high among great mathematicians. 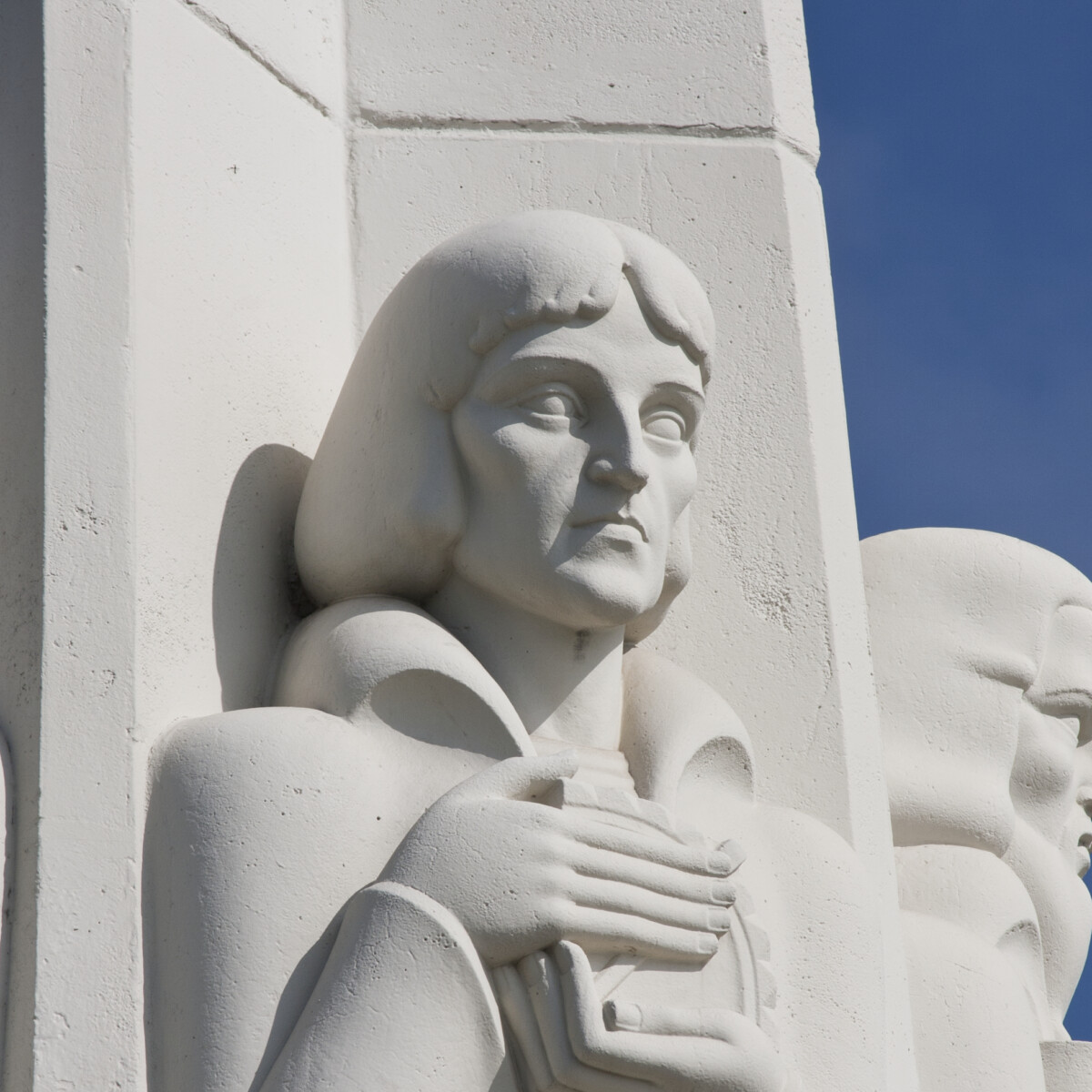 Nicolaus Copernicus was born at Thorn in Poland but spent most of his life at Frauenburg near the mouth of the Vistula River. His life work is contained in his book, “De Revolutionibus Orbium Coelestium,” which was printed just before he died. He placed the sun in its true place at the center of the solar system. His great merit is that he dared to doubt the Ptolemaic system, which placed the earth at the center of the solar system and which had been universally believed for centuries. He brought about a great revolution in thought by suggesting that the earth was not the central and all-important body in the universe. It was only on the score of simplicity that this scheme could be urged at that time. Copernicus showed that the daily rotation of the earth on its axis would account for the apparent daily revolution of the stars. He also showed that the planetary motions were much more simply explained by supposing that the planets, including the earth, revolved in circular orbits, with the sun slightly out of center. 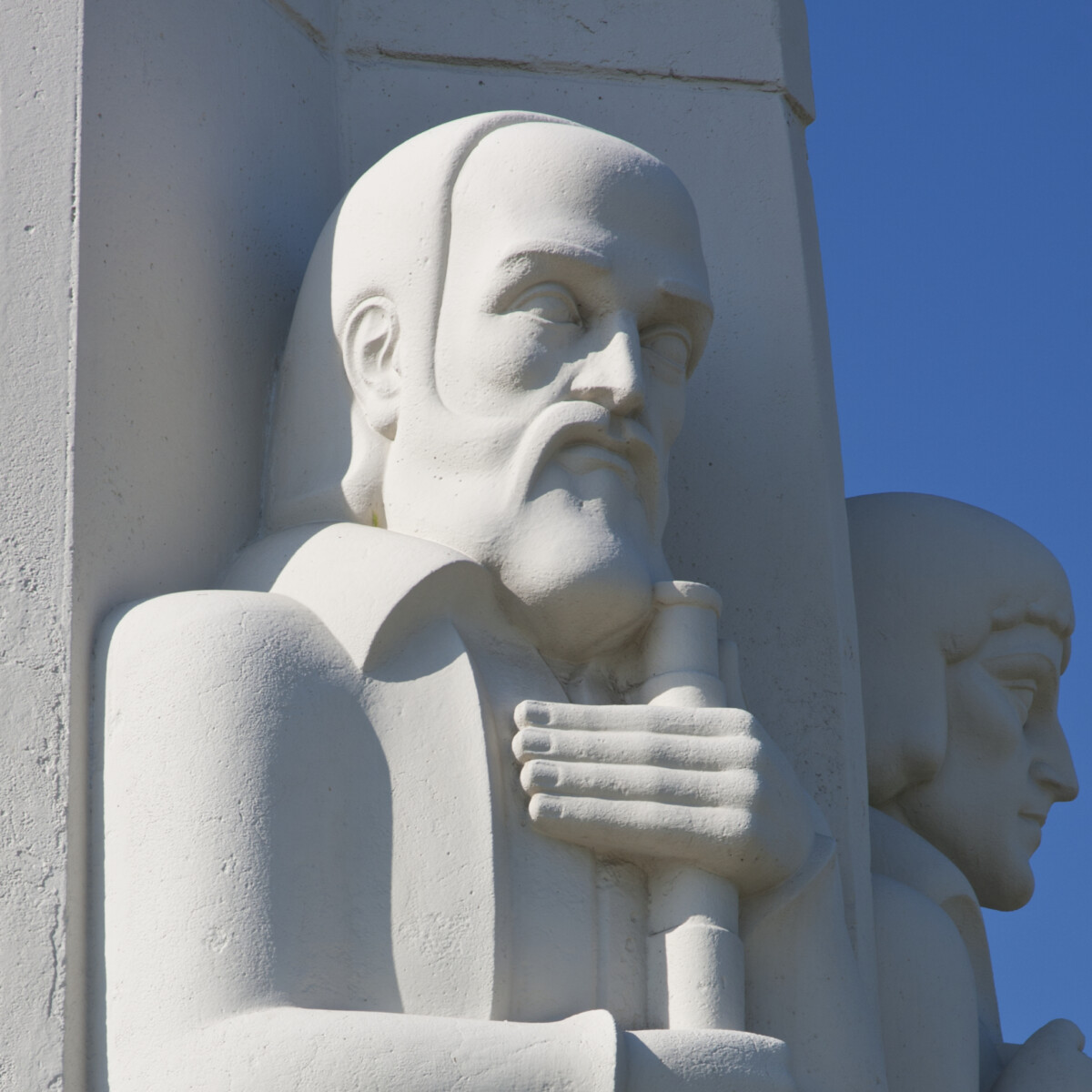 Galileo Galilei was born in Pisa but also lived in other Italian cities, including Florence, Venice, and Padua. He made discoveries and brought forth arguments that secured the triumph of the Copernican system. Hearing of the invention of the telescope, he made one himself and pointed it at the sky, and was the first to understand what he saw there. He discovered four satellites revolving around Jupiter and found that Venus presents phases similar to those of the moon. He observed that the Milky Way is made up of many faint stars, and he made rough measurements of the heights of the mountains on the moon. He showed that the spots on the sun are not planets revolving near the sun, but are on the sun’s surface. Of still greater consequence was his formulation and experimental proof of the laws of motion, and the laying of the foundations of mechanics. Since the Copernican doctrine of the motion of the earth was regarded as heresy by the Church, Galileo’s work brought him into the hands of the Inquisition. He was imprisoned and forced to recant his belief in the Copernican theory. When released, he was forbidden to teach or publish anything. He retired in broken-down health and became blind five years before he died at the age of 78. 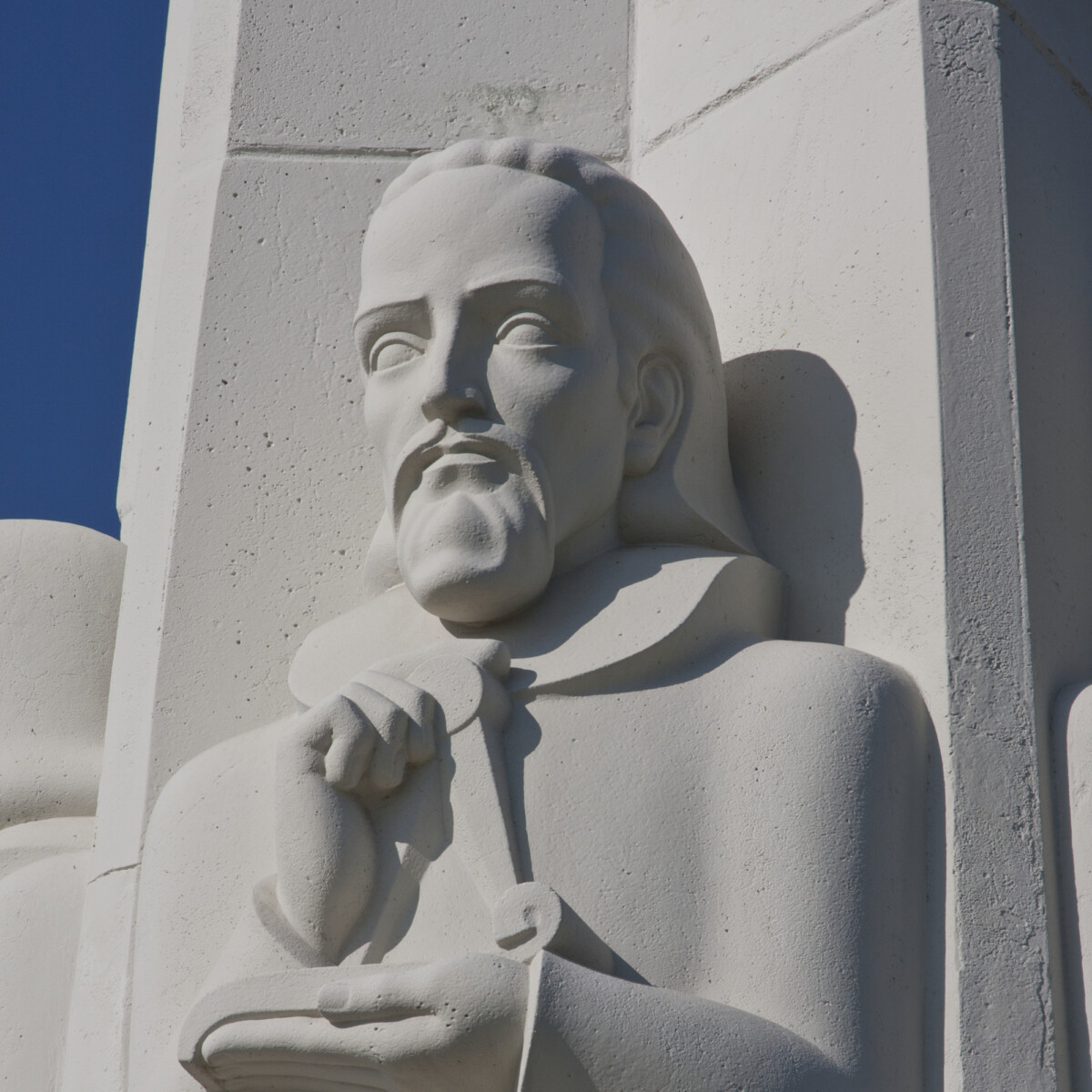 Johannes Kepler was born at Weil, in Wurtemburg, Germany. His genius was recognized by Tycho Brahe, who invited him to Prague as his assistant. He inherited his master’s records of observations, which showed more precisely than ever before how the planets seemed to move among the stars. After many years of incredible labor, Kepler formulated his Three Laws, which describe how the planets are really moving. His First Law states that each planet moves in an oval-shaped path called an ellipse around the sun which is located at a point known as a focus, displaced from the center of the ellipse. His Second Law states that the line joining any planet with the sun sweeps over equal areas in equal times. His Third Law relates the periods of the various planets to their distances from the sun, in that the squares of the periods are proportional to the cubes of the mean distances. Kepler overcame ill health, poverty, and misfortune to discover these laws, which vindicated Copernicus and prepared the way for Newton. 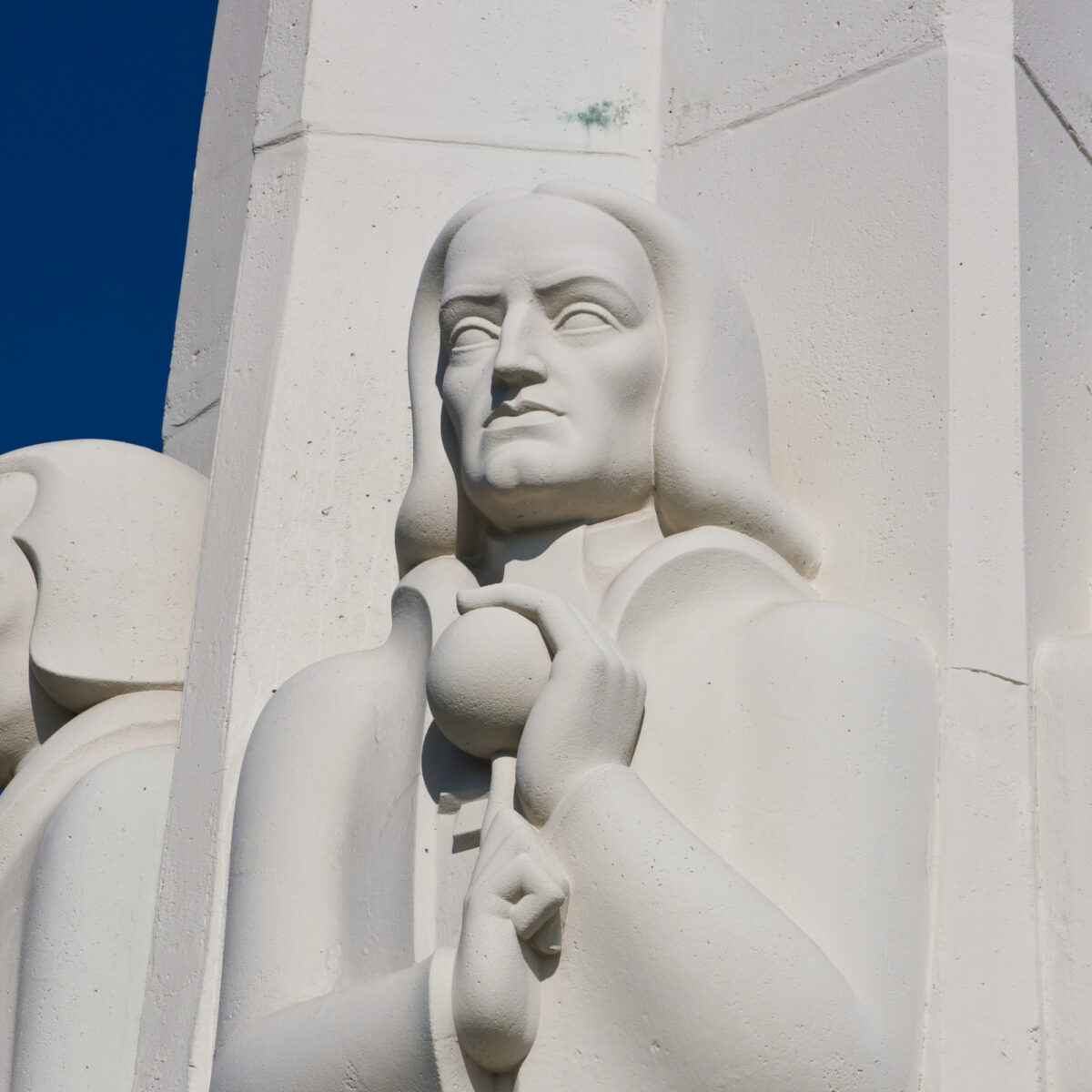 Issac Newton was born at Woolsthorpe, England, in the year in which Galileo died, and he spent most of his life at Cambridge. He clarified and expanded the work of Galileo on the laws of motion, and aided by Kepler’s Three Laws, he went on to his ultimate triumph, the law of gravitation. This states that every particle of matter in the universe attracts every other particle with a force that varies inversely as the square of their distance apart, and directly as the product of the masses of the two particles. Newton showed that the familiar phenomena of falling bodies at the surface of the earth are merely manifestations of a force that pervades the universe. In doing this, he developed an important branch of mathematics known as calculus. He also discovered the compound nature of white light and built the first reflecting telescope. 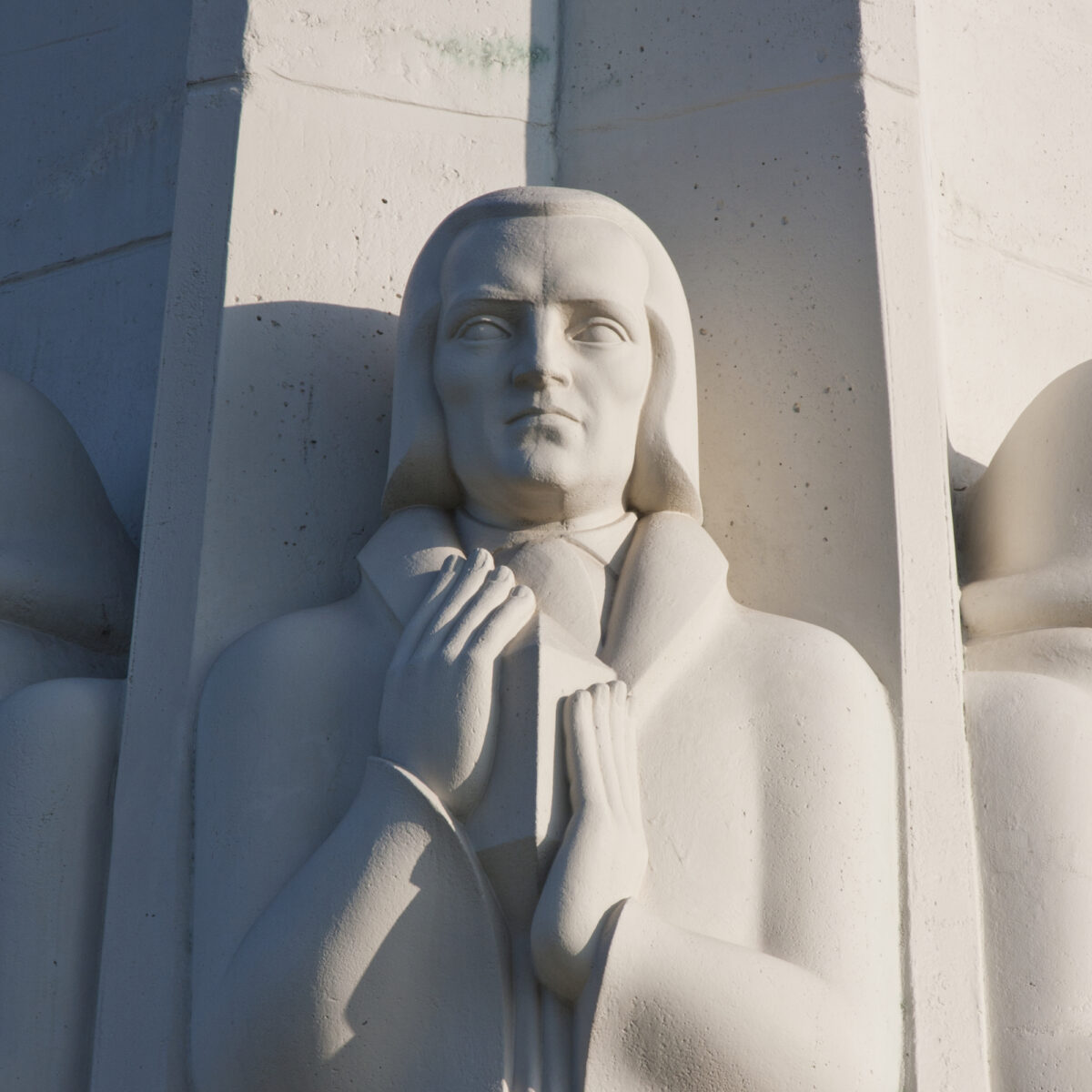 William Herschel was born in Hanover, Germany, but at an early age he moved to England, where he spent the rest of his life. He was trained as a musician, but he became the greatest observing astronomer. He developed the reflecting telescope, making with his own hands several hundred mirrors and a great number of complete instruments. His largest telescope was four feet in diameter and forty feet long. With a smaller instrument, he discovered the planet Uranus, which brought him fame. However, his greatest work was the opening up of the subject of stellar astronomy. With him, every star was a sun. He investigated the distribution of the stars and the form of the galaxy. He found that many pairs of stars consist of two suns revolving about each other and that our sun is moving through space. He discovered and studied many nebulae. Herschel brought to the attention of the world the stupendous size and complexity of the universe of the stars, in contrast to the smallness and simplicity of the solar system.