The South Gallery is a nexus connecting the entry to the Samuel Oschin Planetarium, the W.M. Keck Central Rotunda, and Gravity’s Stair, which leads down to the lower levels of the building. Covering the entire ceiling of the South Gallery is a spectacular mural, painted by A. B. Heinsbergen, which depicts the Sun with rays emanating outward. The walls of the gallery are home to ten iconic images from astronomy and space exploration. 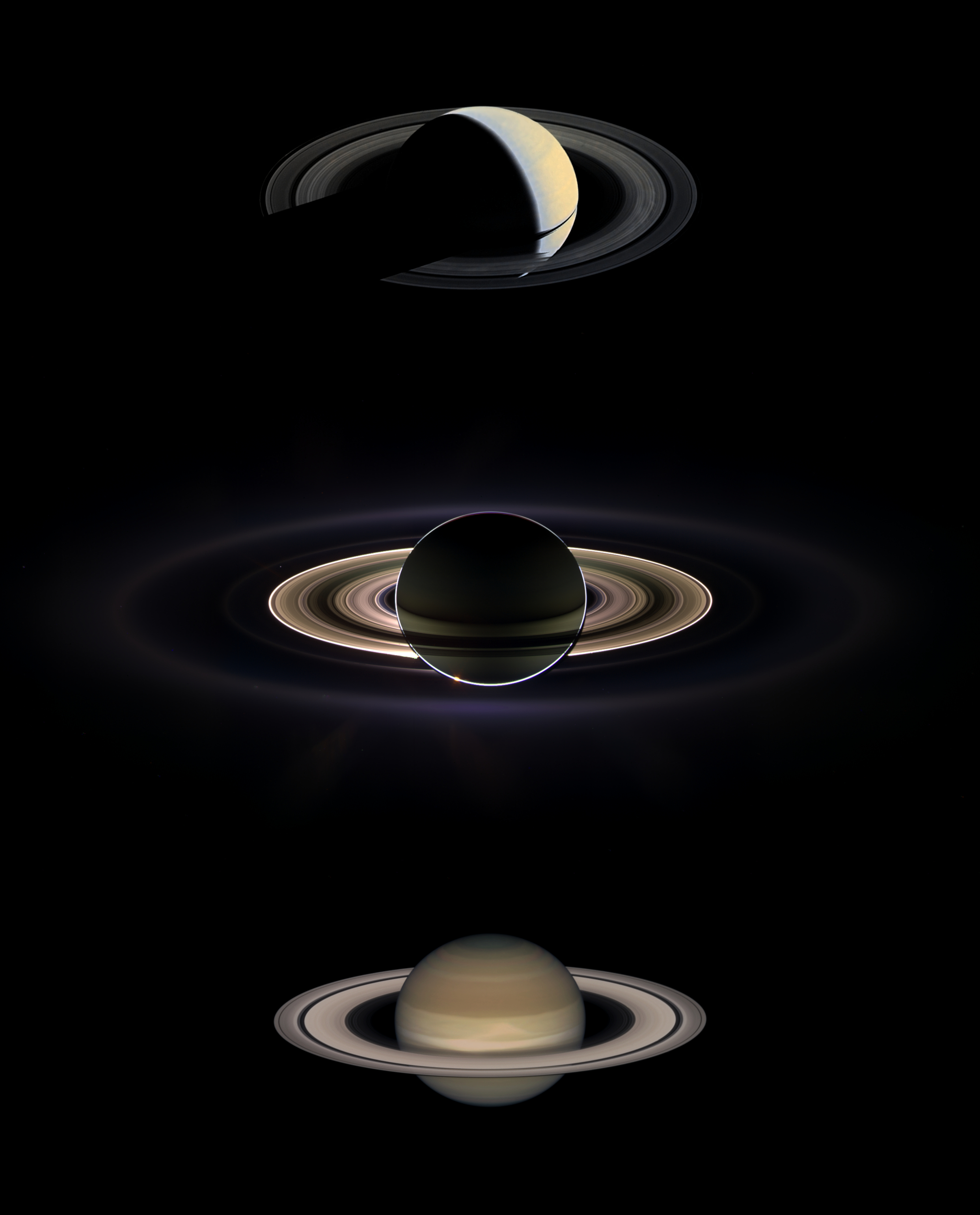 These views (right) show how Saturn and its rings appear from different angles. Voyager II took the top view in 1980 as it looked back at a crescent Saturn with its rings interrupted by the planet’s shadow. The center view, taken by the Cassini Saturn Orbiter in 2006, captures sunlight scattered by the rings and reflected onto the night side. Earth is the dot to the upper left of the main rings. The Hubble Space Telescope image from 1995 at bottom provides a more “familiar” view of the fully lit planet. (NASA) 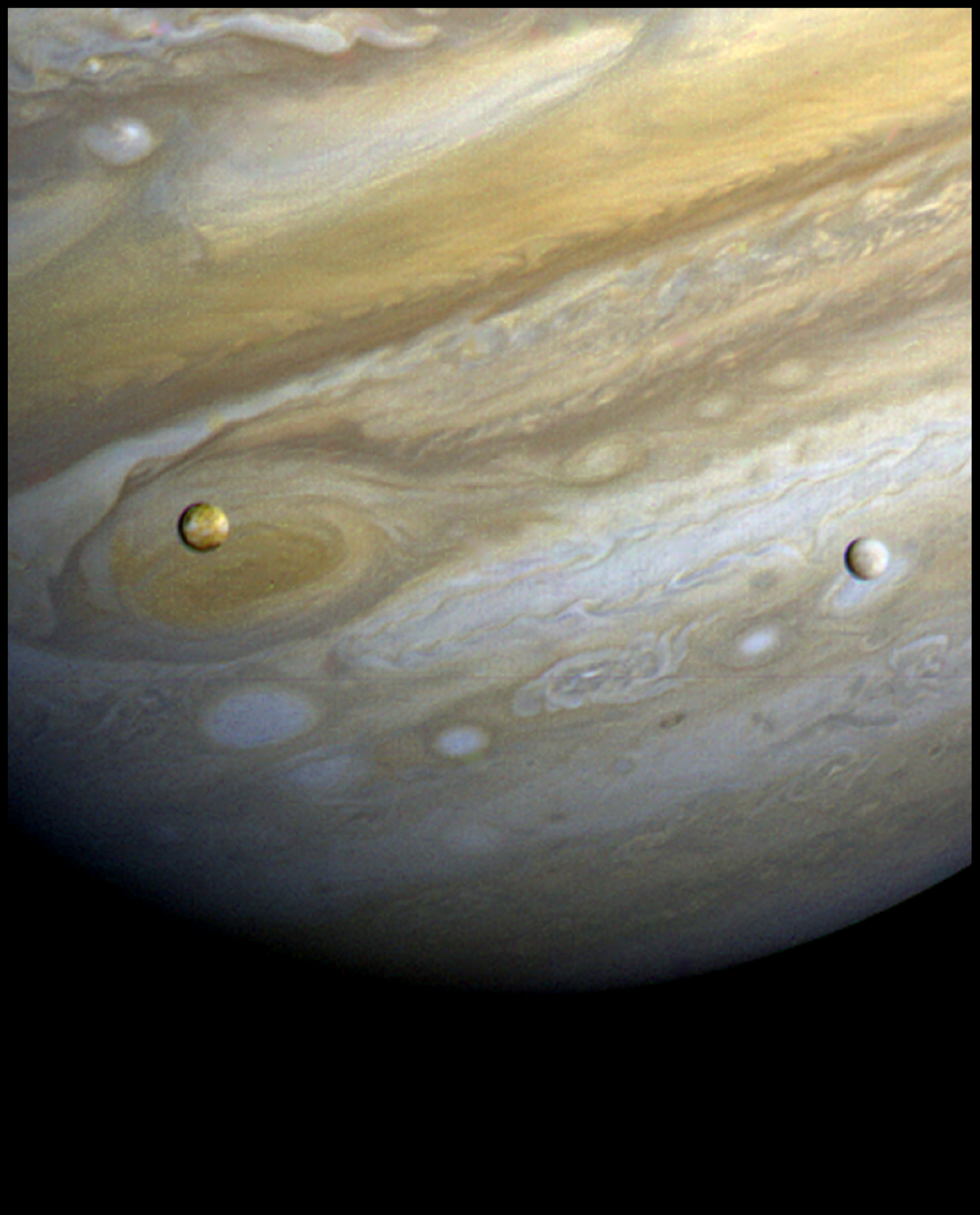 Jupiter’s moons Europa and Io loom in front of the planet’s giant Red Spot and turbulent clouds (left). Voyager I obtained this image on February 13, 1979, from a distance of 12 million miles, still three weeks from its closest approach to Jupiter. (NASA)

Images of the Surface of Another World 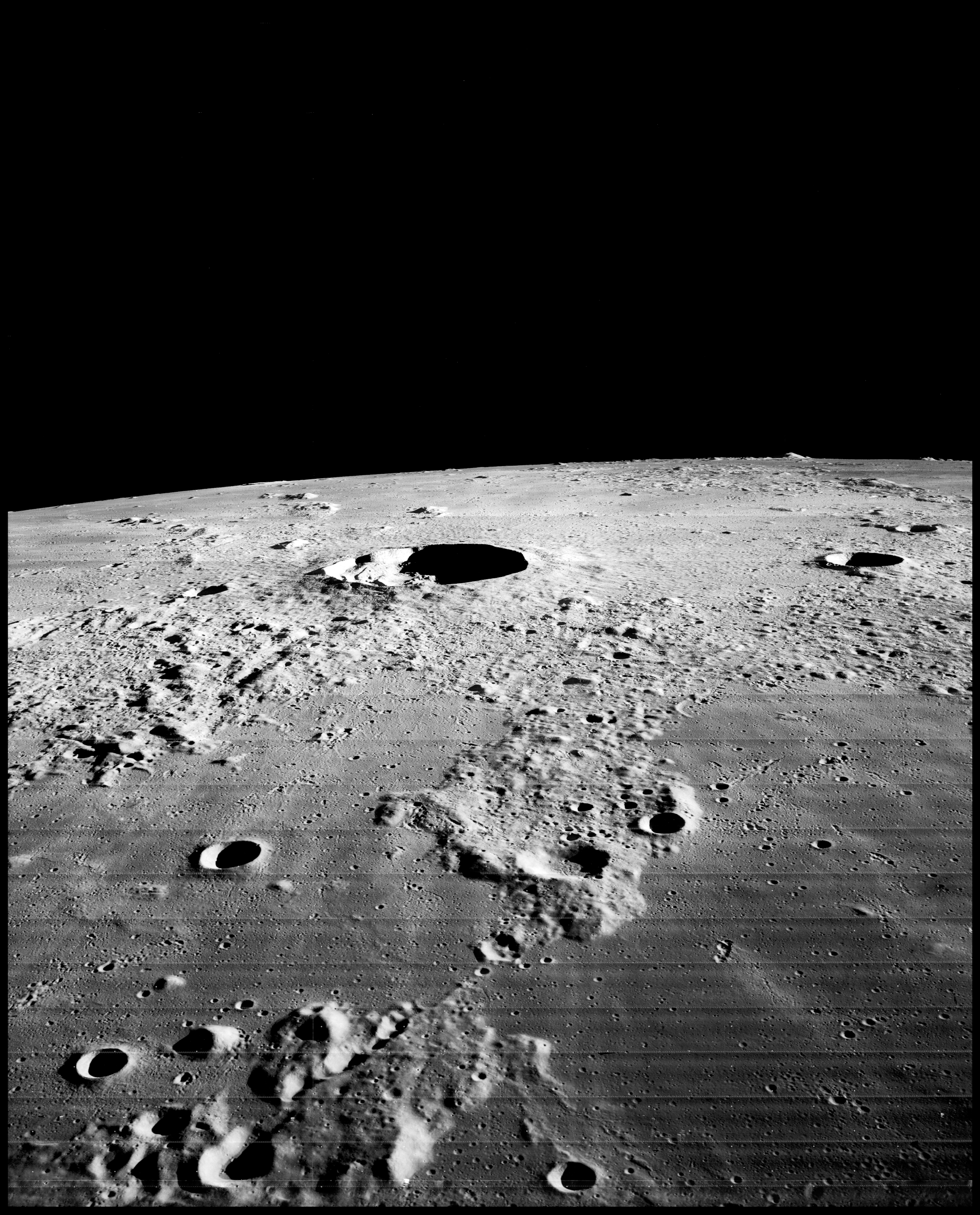 The 20-mile wide impact crater Kepler is the most prominent feature in this picture (right) taken by Lunar Orbiter 3 in February 1967. The robotic Lunar Orbiter program created detailed photographs of nearly all the Moon’s surface in preparation for the Apollo program. (NASA/USGS) 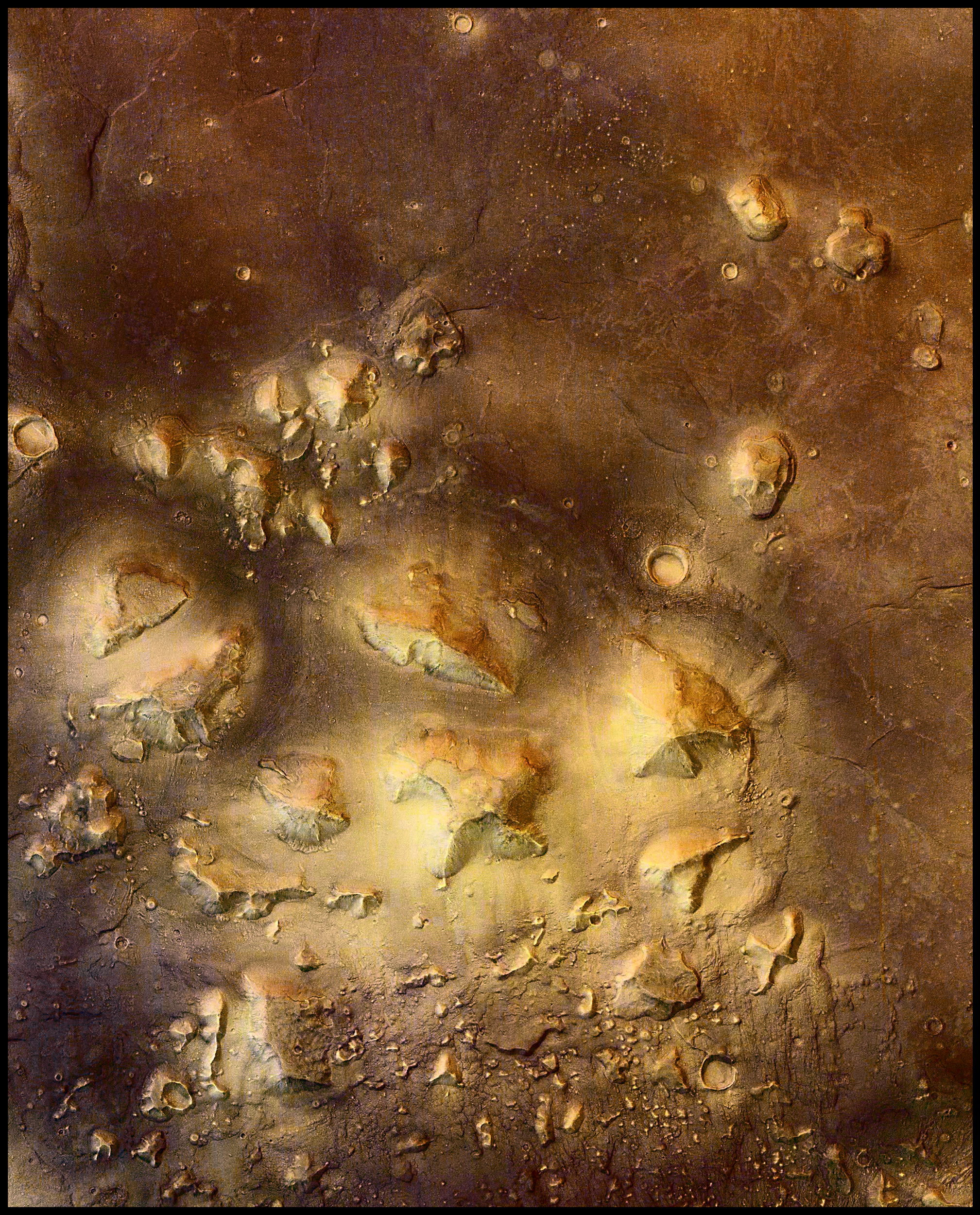 The “Face on Mars” in the upper right is revealed to be one of several eroded hills in the remarkable Cydonia region. This image (left), taken on July 22, 2006 by the ESA Mars Express Orbiter, reveals details as small as 46 feet across and shows a region 16 miles wide. (ESA/DLR/FU Berlin-G. Neukum) 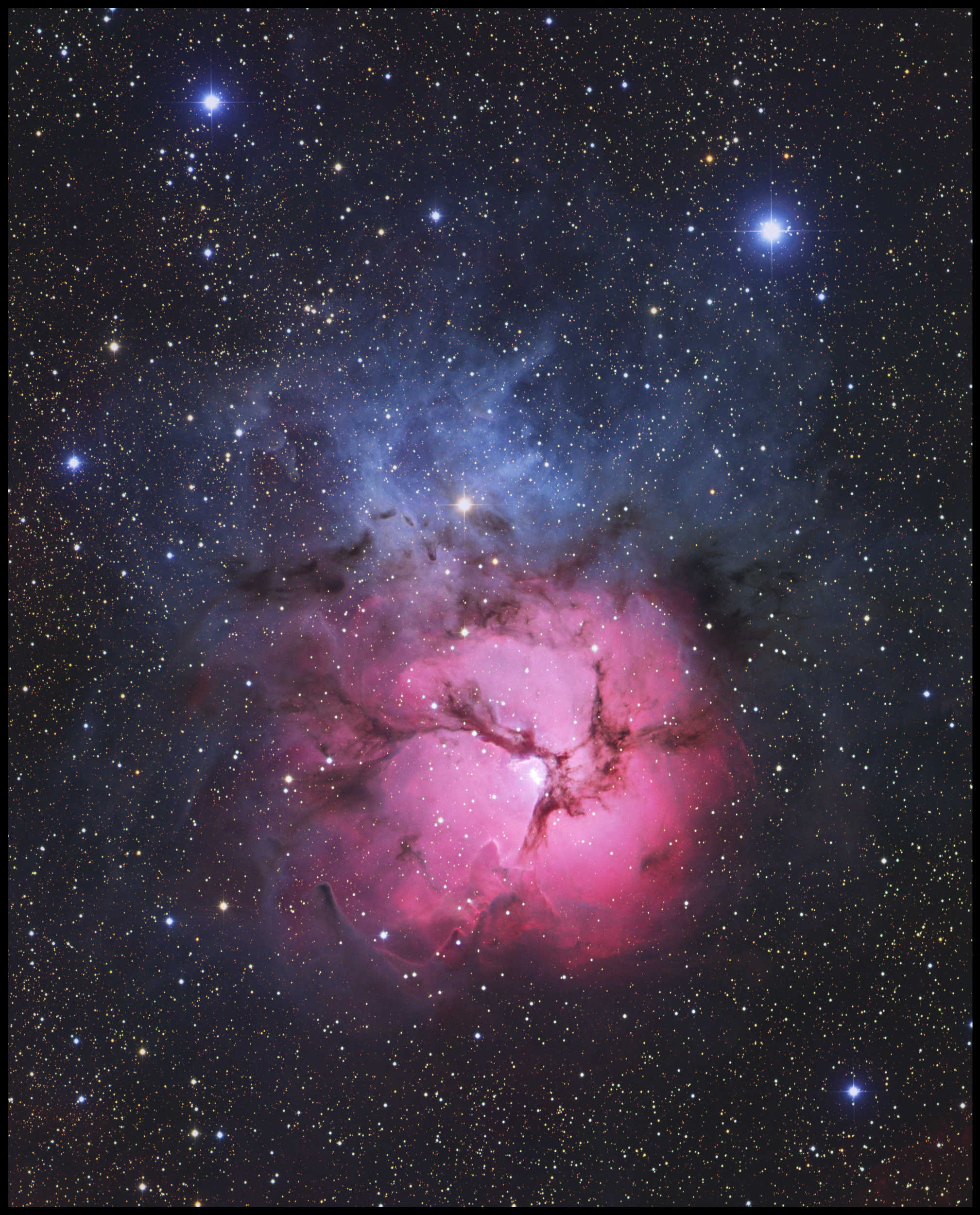 The Trifid Nebula, Messier 20, is a cloud of dusty gas in which stars are both forming and emerging (right). The red color of the 40-light-year-wide nebula is glowing hydrogen, while the blue color is light, scattered and reflected by dust, from a cluster of emerging, hot stars. Dust absorbs the light of what lies beyond and creates dark lanes. M20 is about 3,500 light years distant. (David Malin/Australian Astronomical Observatory) 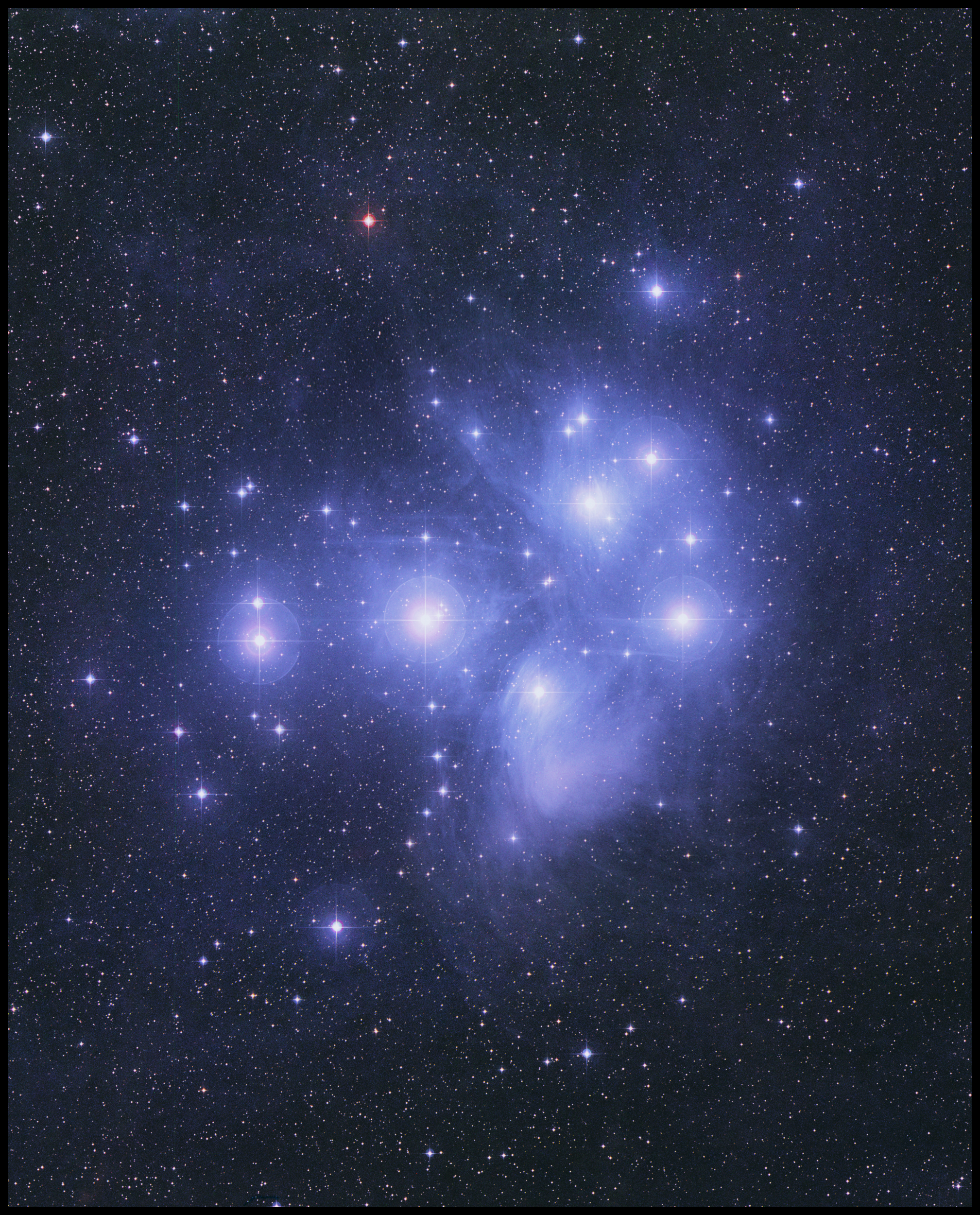 The Pleiades star cluster (left), sometimes called the “Seven Sisters”, is actually a group of hundreds of stars located about 430 light years away from us. The brightest, Alcyone, is 1,000 times as bright as the Sun. The cluster is passing by an unrelated cloud of dust that reflects and scatters the stars’ blue light. (David Malin /Australian Astronomical Observatory/Royal Observatory, Edinburgh) 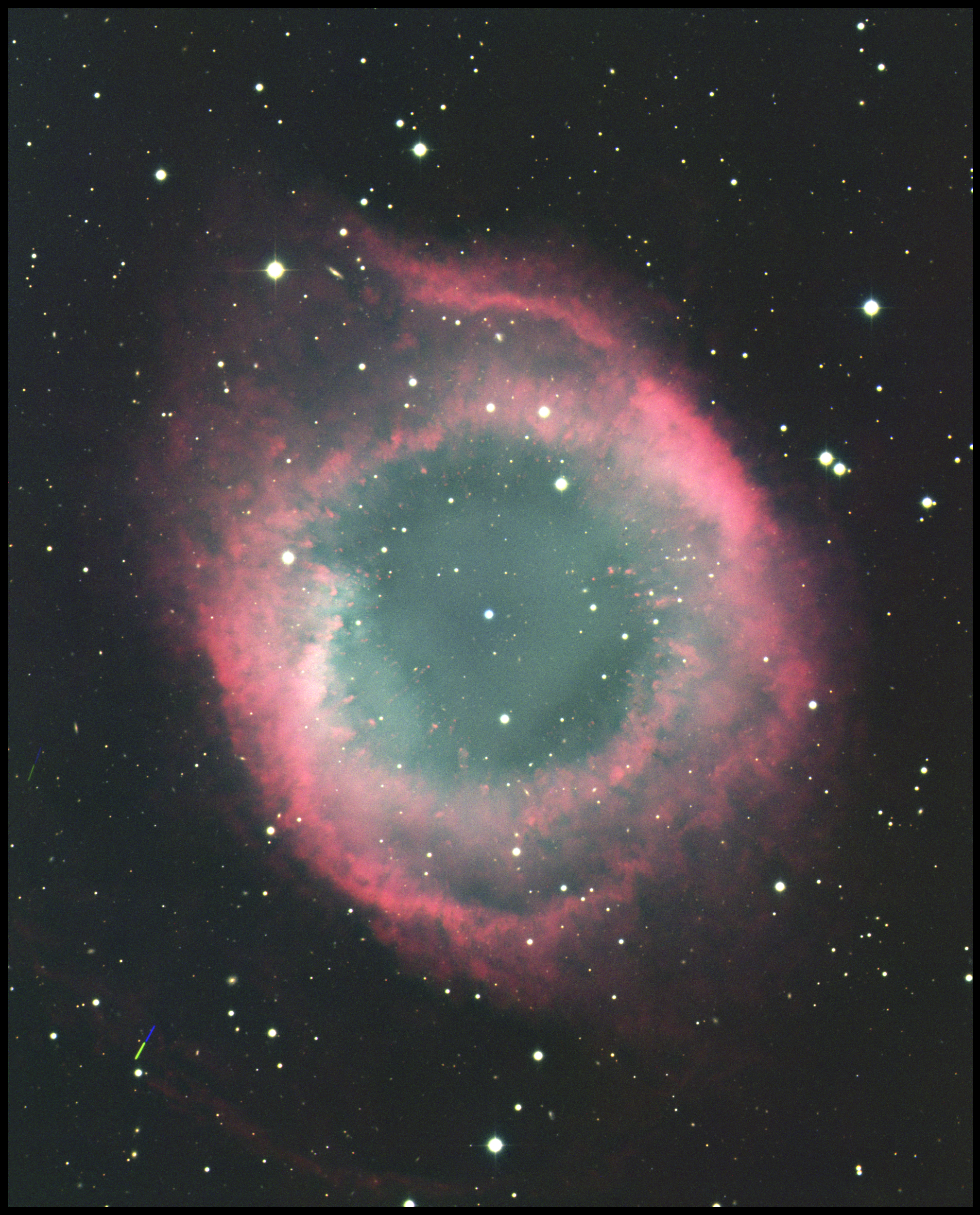 Four hundred light-years away, the Helix nebula in Aquarius is the nearest planetary nebula to us (right). A planetary nebula is a shell of gas shed by a star when the star shrinks to a white dwarf. Our sun may do the same thing about 5 billion years from now. Asteroids moving through the picture during part of the tree-filter photographic process caused the yellow and blue streaks. (David Malin/Australian Astronomical Observatory)

Stars, some bunched into clusters, and clouds of hydrogen gas, including Messier 17, near the top, are visible in the central region of the Milky Way (left). We also see blue reflection nebulae and the silhouettes of dark dusty clouds. (David Malin /Australian Astronomical Observatory/Royal Observatory, Edinburgh) 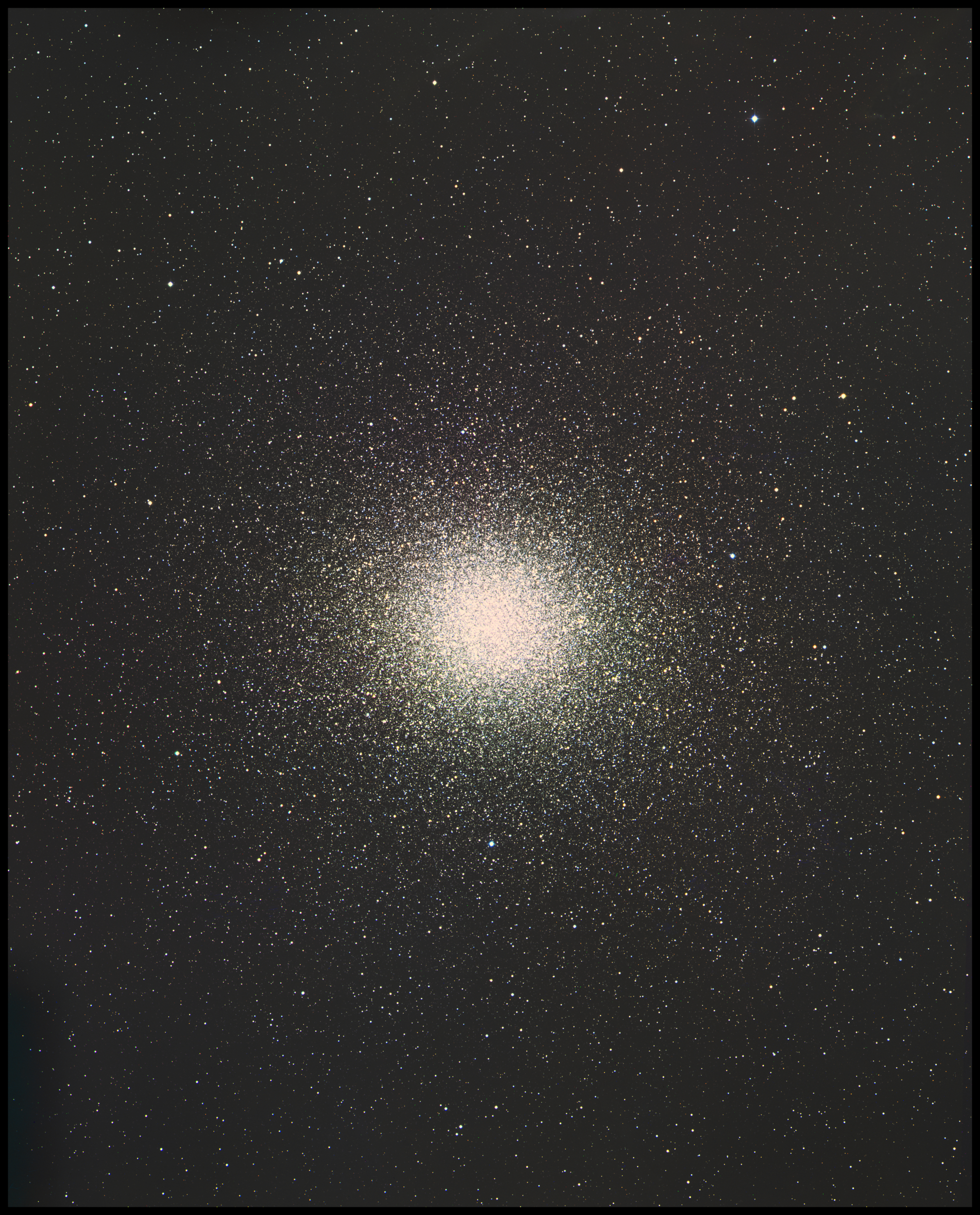 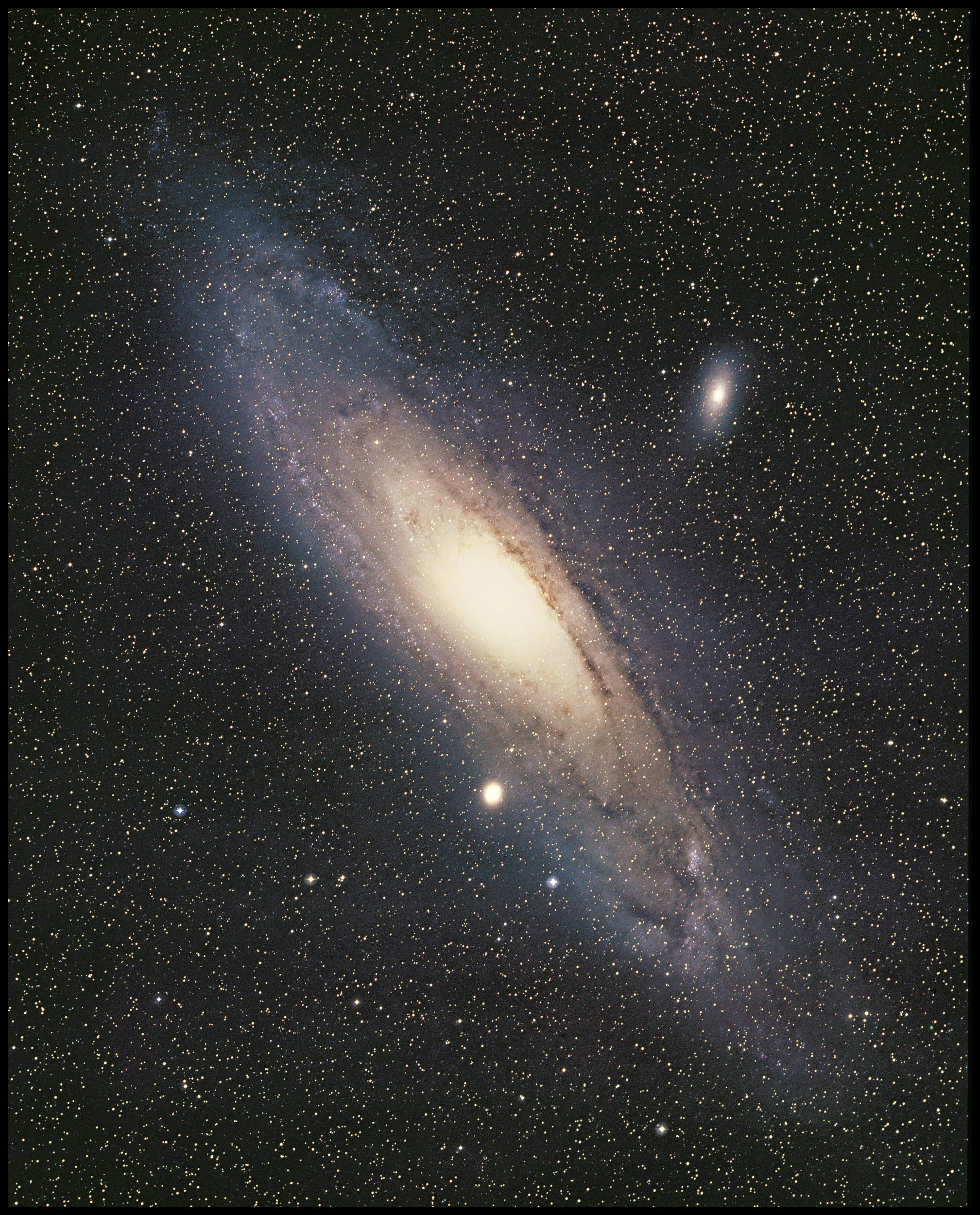 At a distance of 2.5 million light-years, the Andromeda Galaxy (left), Messier 31, is the nearest large spiral galaxy to our own Milky Way. This is the first color photograph ever taken of it. It was obtained with the 48-inch (now Samuel Oschin) Schmidt camera at Palomar Observatory by William C. Miller on August 11, 1958. This version was recently re-mastered by David Malin. (Miller photograph/Malin-Caltech) 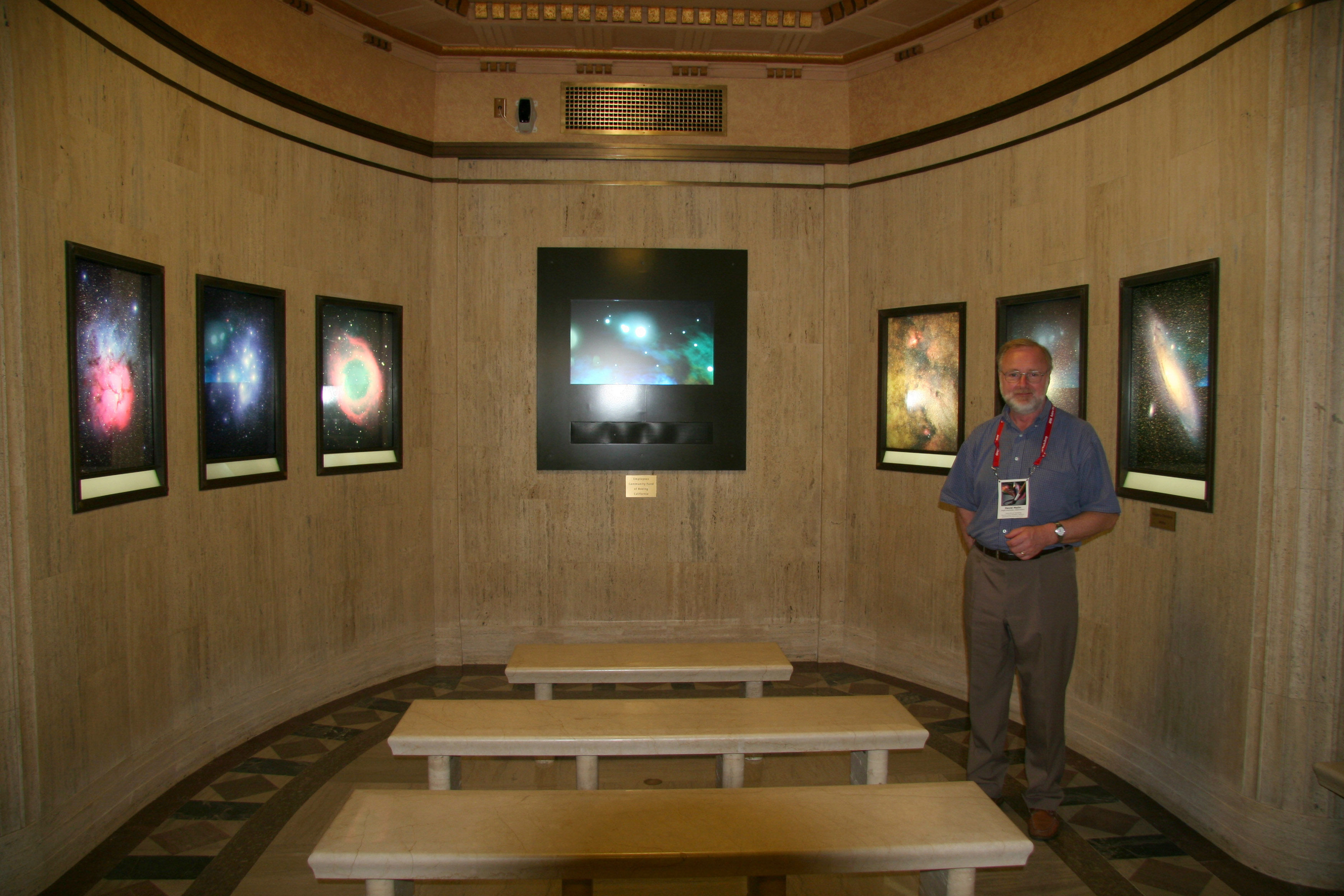 Griffith Observatory is pleased to present several photographs by David Malin, one of the world’s leading astronomical photographers. Most of these iconic images were made by Malin and his team using plates taken with the telescopes of the Anglo-Australian Observatory.