Since opening in 1935, more than seven million people have put an eye to Griffith Observatory’s original 12-inch Zeiss refracting telescope. More people have looked through it than any other telescope in the world. Located in the roof-top dome on the building’s east end, the Zeiss telescope is intended mainly for nighttime viewing by the general public, commonly targeting the Moon, planets, and brightest showpiece objects of our galaxy. A popular public destination when special celestial events occur, more people viewed Halley’s Comet and comets Hale-Bopp and Hyakutake through the Observatory’s Zeiss telescope than any other telescope on the planet.

A 9½-inch refracting telescope, also by Zeiss, was added piggyback to the 12-inch in 1955. It aided with research work and is also used for public observation. 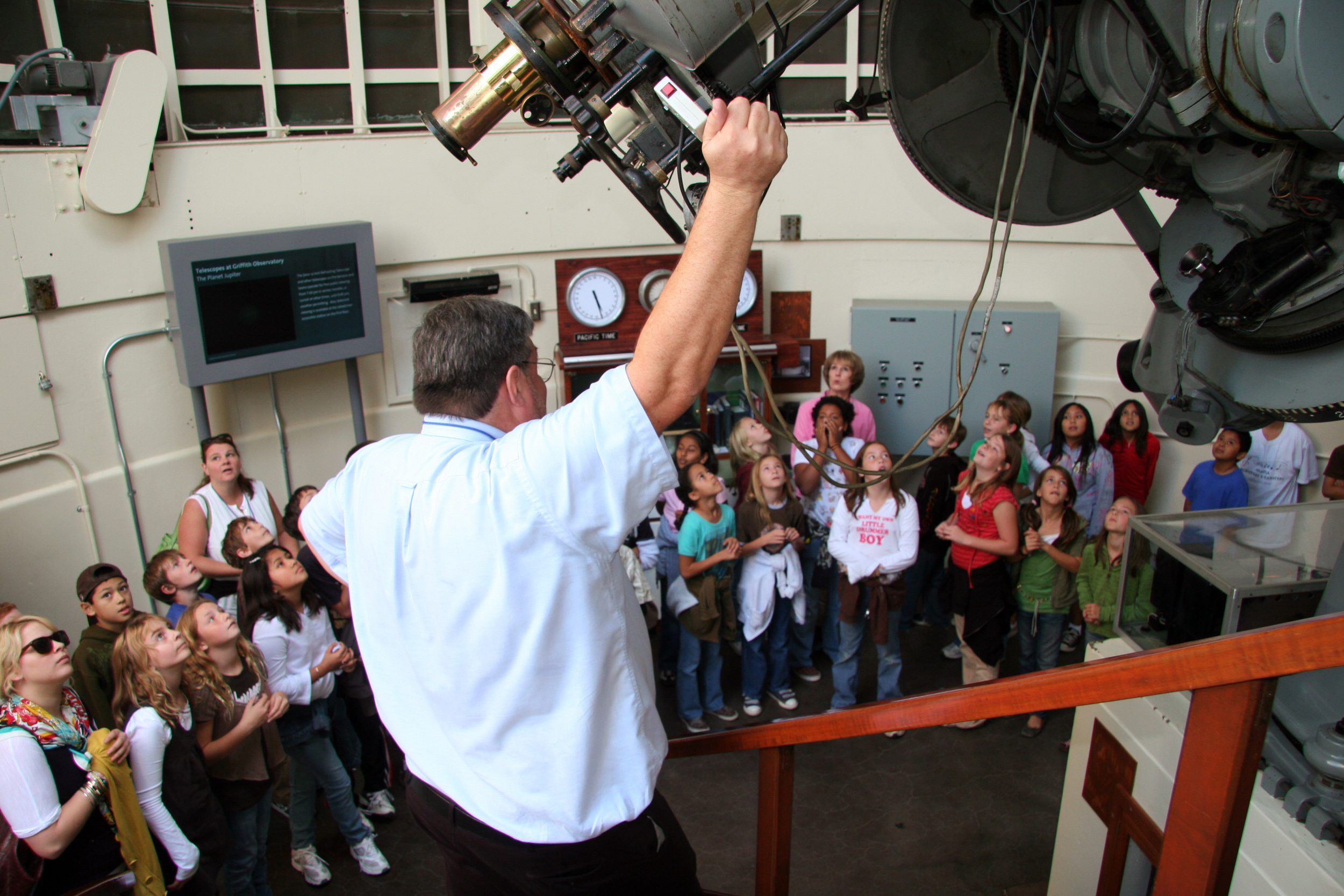 Free telescope viewing is available each evening the Observatory is open and skies are clear. Knowledgeable telescope demonstrators are available to guide visitors in observing.

Observing usually begins around 7:00 p.m. Please be aware the demonstrators must cut off the line for each telescope at 9:30 p.m. or earlier to enable all viewing to be completed by 9:45 p.m. Hours for telescope operation are not the same as for the building (which closes at 10:00 p.m.).

Griffith Observatory is one of the premier public observatories in the world. One of the principal reasons is the presence and regular availability of high-quality public telescopes. Griffith J. Griffith wanted the public to have the opportunity to look through a telescope, which he felt might broaden human perspective. Mounted in the copper-clad dome on the east end of the building is the Zeiss telescope array. This telescope is free to the public every night the the Observatory is open and the sky is clear.

Since opening in 1935, more than seven million people have put an eye to Griffith Observatory’s original 12-inch Zeiss refracting telescope. More people have looked though it than any other telescope in the world. Located in the roof-top dome on the building’s east end, the Zeiss telescope is intended mainly for nighttime viewing by the general public, commonly targeting the Moon, planets, and brightest showpiece objects of our galaxy. A popular public destination when special celestial events occur, more people viewed Halley’s Comet and comets Hale-Bopp and Hyakutake through the Observatory’s Zeiss telescope than any other telescope on the planet.

The telescope itself is in excellent condition and was unchanged by the renovation and expansion project. The copper roof of the telescope dome was repaired and restored, and the dome’s drive mechanisms were replaced. The most significant change is the addition of a new exhibit station located in the Hall of the Eye exhibit hall below the telescope dome. The station provides live video and audio feeds from the telescope and allows visitors unable to climb the stairs into the telescope dome to have an observing experience. Most nights, other telescopes also are available on either the roof or front lawn to allow those in wheelchairs to observe directly. 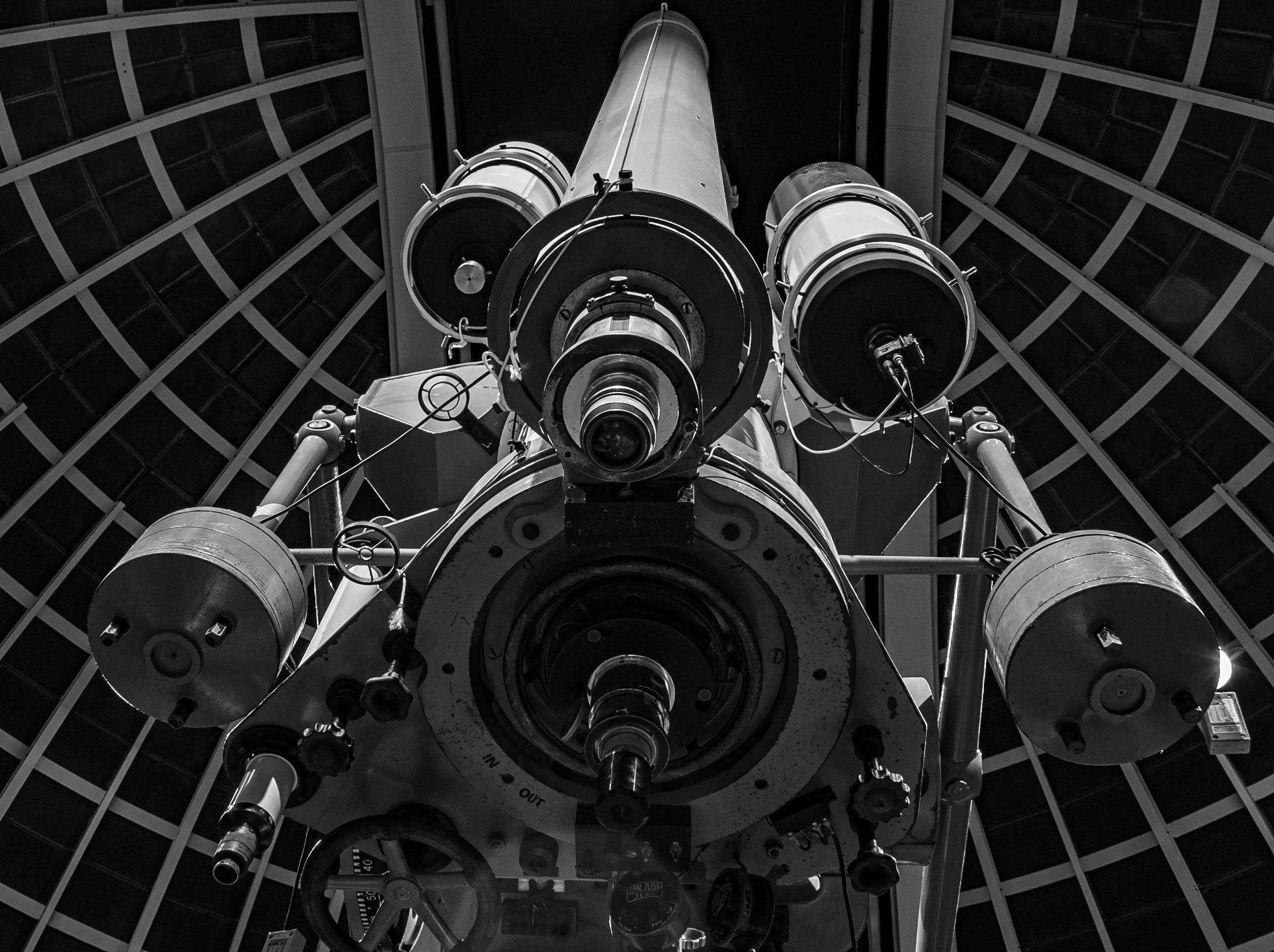 When the night sky is clear, the Zeiss telescope is open from the roof and serves up to 600 visitors per night. One of the Observatory’s experienced telescope demonstrators guides the public in looking through the eyepiece of the 12-inch Zeiss refractor (so called because its light is collected and focused by a 12-inch diameter glass lens at the front of the 16-foot-long telescope tube). The main telescope tube carries a smaller 9-inch refracting telescope piggyback, which permits two different views of a single object, as appropriate.

The telescope sits on a tilted mounting (an equatorial mount) aligned with the Earth’s axis, and it is slowly turned by a motor to compensate for the Earth’s rotation so that objects remain centered in view for as long as is desired. Counterweights precisely balance the telescope so that the Telescope Demonstrator can easily move the instrument by hand in spite of its 9,000-pound weight. The unique design of construction by Zeiss also counteracts the bending of the telescope due to gravity with counterweighted levers in the telescope’s tube and mounting. Such a system is said to be “stress compensated.”

The genesis of Griffith Observatory’s public telescope occurred when Griffith J. Griffith was invited to visit to Mount Wilson Observatory, then home to the world’s largest operating telescope, the 60-inch reflector. While there, he was given the opportunity to view a celestial wonder through the telescope. Profoundly moved by the experience, Griffith seized on the idea of constructing a public observatory with a telescope that could be used by all residents of Los Angeles. He specified in his will that the telescope was to be “at least 12-inches in diameter” and “complete in all its details” and was to be located “high and above the Hall of Science.” In 1931, the Griffith Trust ordered the telescope from the Carl Zeiss Company of Jena, Germany; the $14,900 spent on the instrument was the first purchase of material for Griffith Observatory.

According to John Anson Ford, the genesis of Griffith Observatory and its public telescope occurred when Col. Griffith J. Griffith (1850-1919) paid a visit to the Mt. Wilson Observatory, then home of the world’s largest operating telescope, the 60-inch reflector. There he was given the opportunity to view a celestial wonder through the telescope, and was profoundly moved by the experience. “Man’s sense of values ought to be revised,” Ford quotes Griffith as saying. “If all mankind could look through that telescope, it would revolutionize the world”.

After consulting many experts on astronomy and public education, (including George Ellery Hale, founder of the Yerkes and Mt. Wilson Observatories), he established a trust fund with the goal of eventually building an Observatory that would contain solar and celestial telescopes, a scientific theater, and a museum (the “Hall of Science”) to illustrate the place of humanity in the vastness of space and time. For celestial viewing, he specified in his will that the telescope was to be “at least 12-inches in diameter” and “complete in all its details” and was to be located “high and above the Hall of Science”. 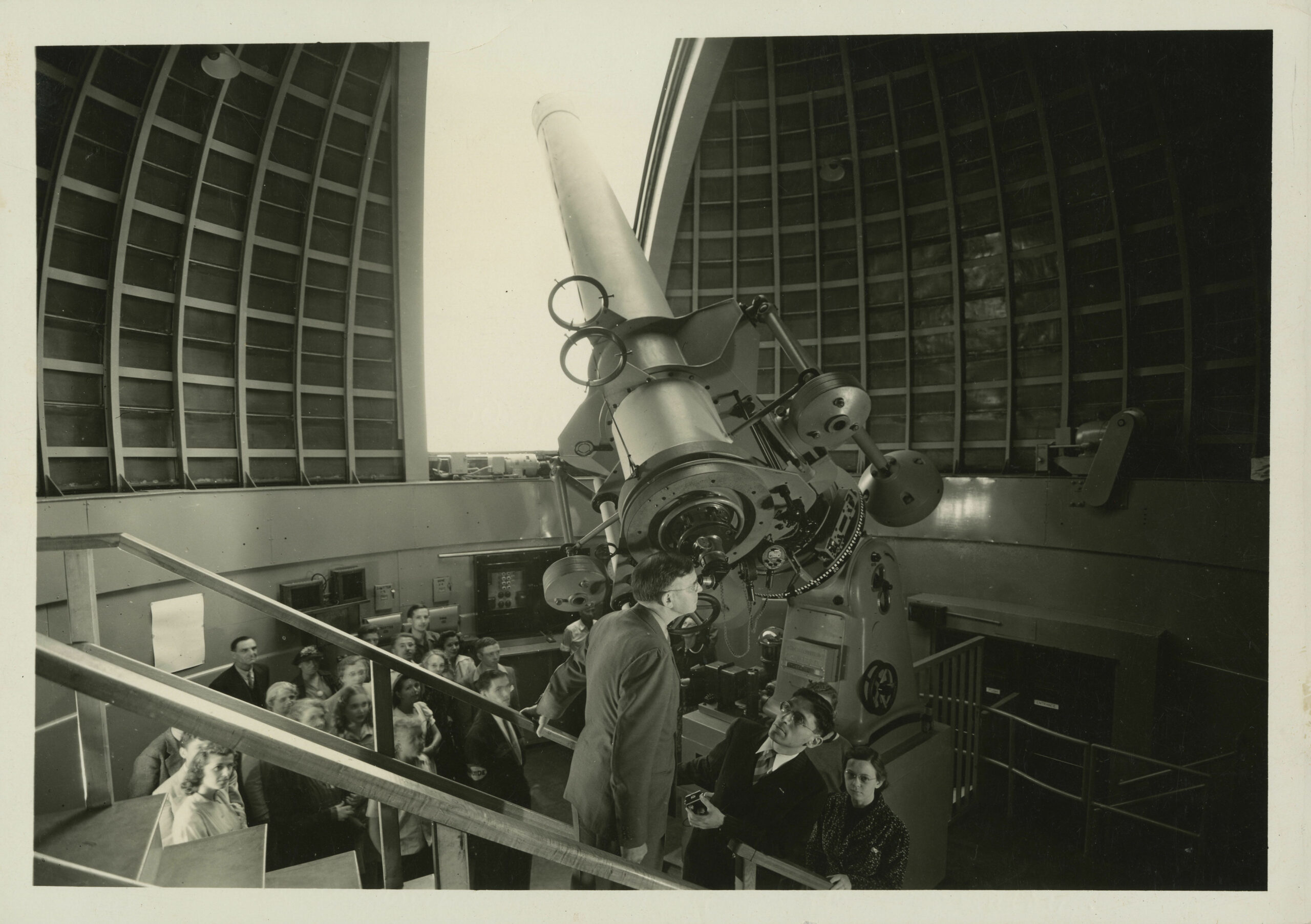 Following Griffith’s death in 1919, plans for the observatory and Hall of Science were delayed until the Griffith Trust committee determined that its fund had grown sufficiently to carry out Griffith’s will. In 1930 the trust committee appealed for help in realizing Griffith’s plans to Walter Adams, Director of the Mt. Wilson Observatory, and to George Ellery Hale, who was in the midst of directing the planning of a 200-inch telescope (eventually completed in 1948 as the Hale Telescope on Palomar Mountain).

Hale’s artist, instrument designer, architectural consultant, and the figurehead of the amateur telescope making movement, Russell W. Porter, chose the 12-inch Zeiss refracting telescope as being the best available for fulfilling Colonel Griffith’s intentions. The Griffith Trust ordered the telescope from the Carl Zeiss Company of Jena, Germany in 1931. The $14,900 spent on the instrument was the first purchase of material for the observatory.

At the Zeiss factory, the telescope was set up in a special testing room with a sliding roof for its first check out on the stars when the astronomer Walter Baade happened to visit, and he was invited to be the first to look at starlight through the lens. Following this visit, Baade would move to California and gain fame by using the giant telescopes of Mt. Wilson and Palomar Mountain to correctly gauge the distances of the galaxies. A decade after Baade’s visit to Zeiss, the factory at Jena was destroyed by the Allied bombing of World War II.

Workers from Zeiss assembled the telescope in its dome at Griffith Observatory early in 1935. Opening night (May 14, 1935) at Griffith Observatory was cloudy, so the public had to wait for the first clear night, the following May 17, for a chance to look through the eyepiece. Since then the telescope has carried out Griffith’s primary mission of providing views of the night sky to visitors on every clear night that the Observatory is open, amounting to more than seven million people since the first night.

Thanks to a loan from Meade Instruments, the observatory staff is gaining experience with CCD (Charge-Coupled-Devices) to extend the uses of the Zeiss Telescope. 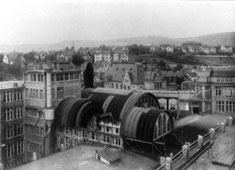 The Zeiss factory in Jena, Germany ca. 1930. The building with the sliding roof (below center) is where telescopes were temporarily set up for testing on the stars. 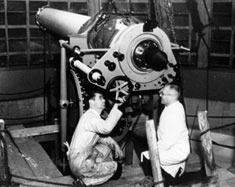 Workers from the Zeiss company install the 12-inch telescope at Griffith Observatory, 1935. 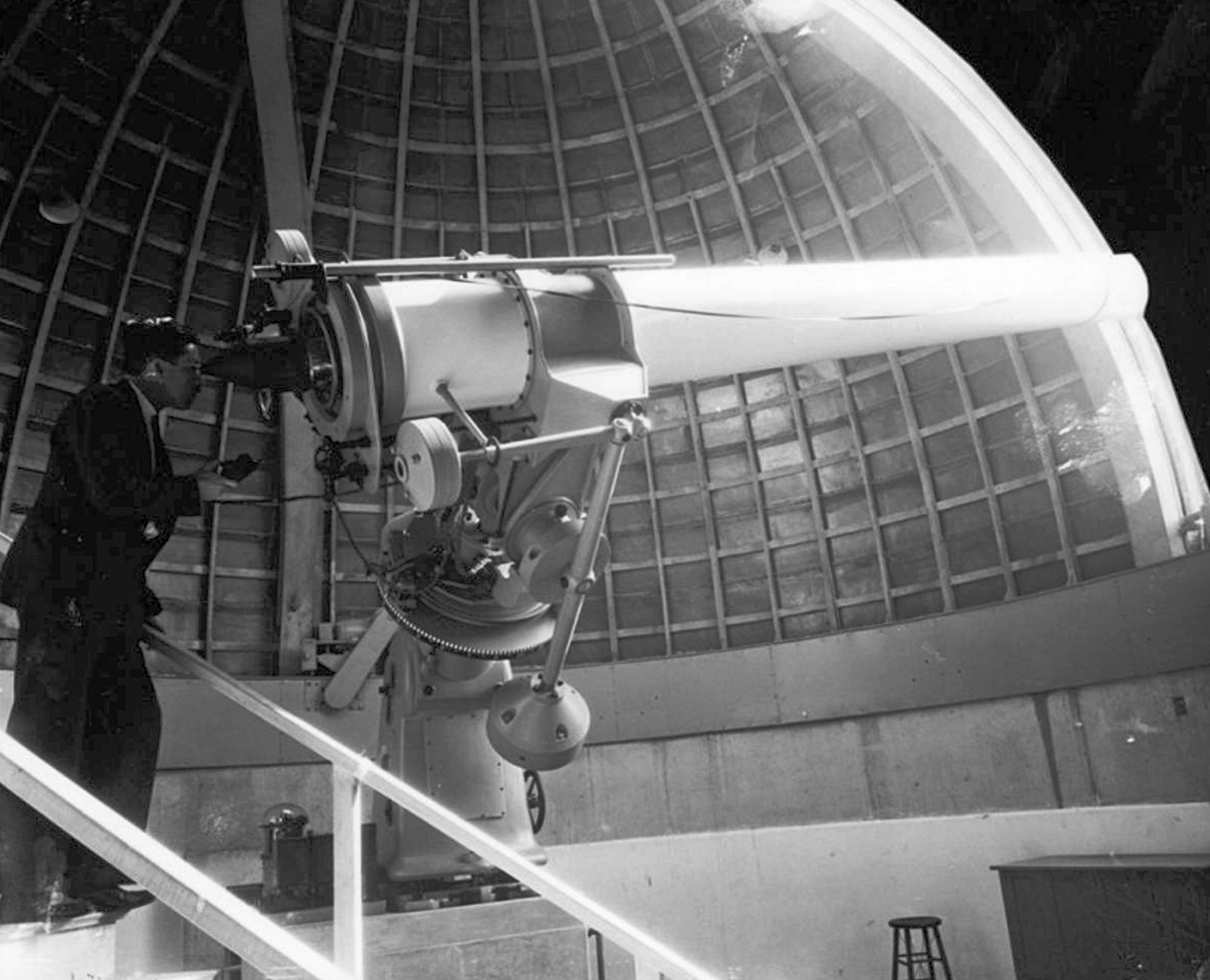 The completed telescope as it appeared in 1935. 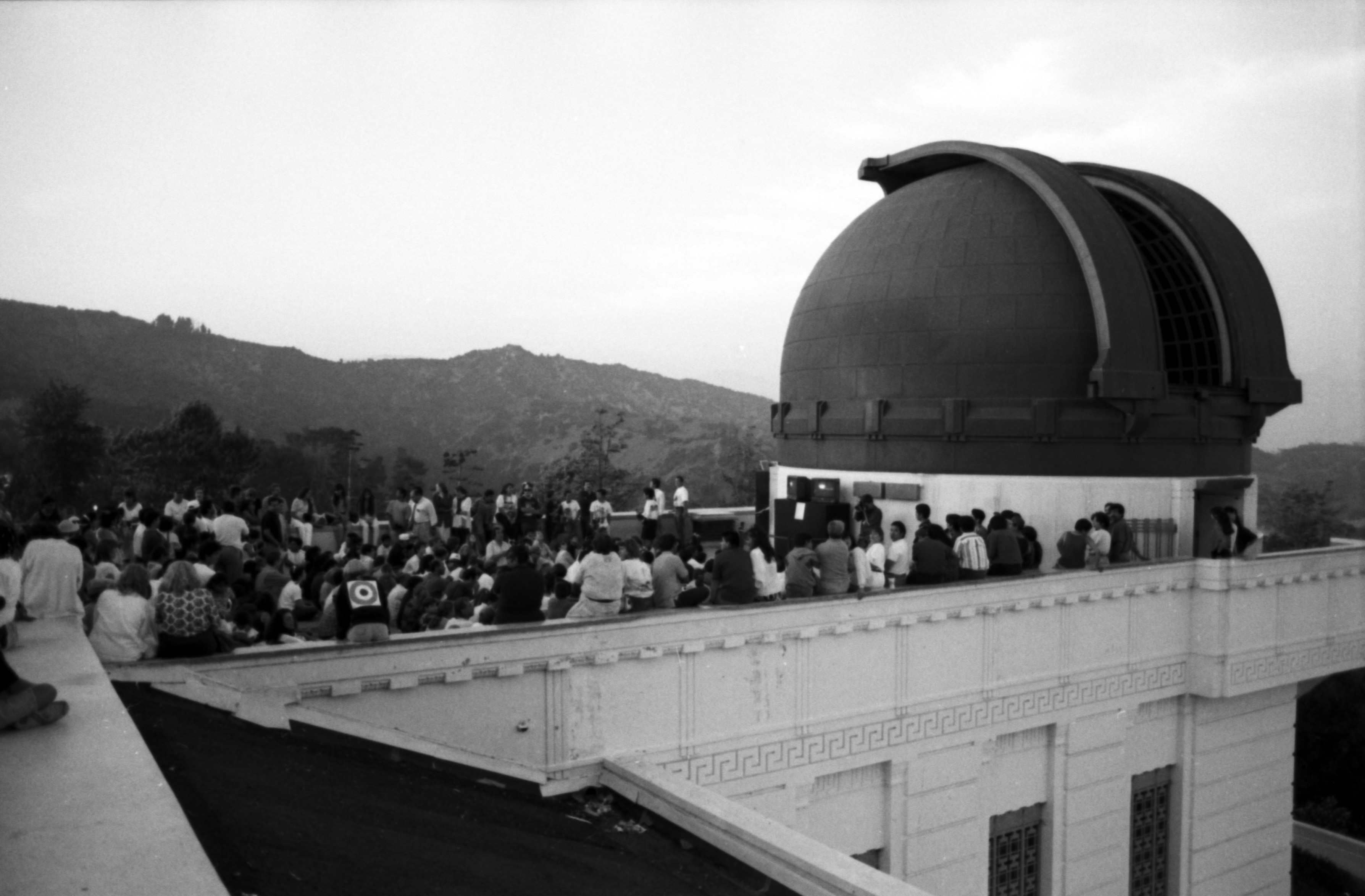 Telescope Demonstrator Glenn Miller updates the crowds assembled to see the images coming from the telescopes throughout the week of the comet collisions. 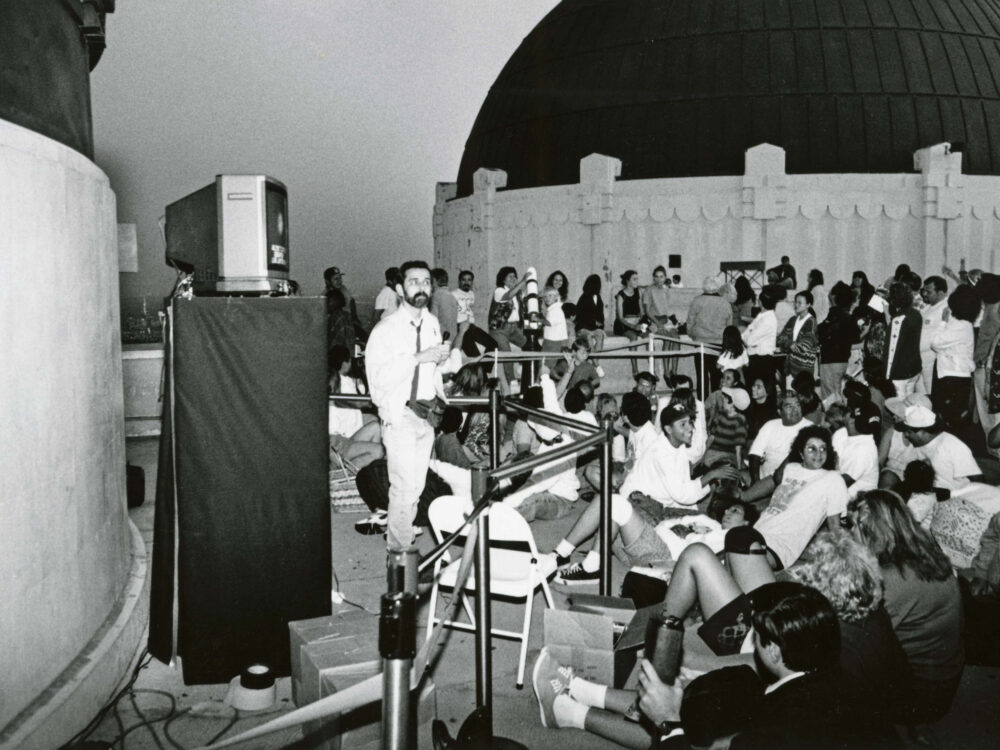 Another view of the overflow crowds who came to watch comet-scarred Jupiter in 1994. 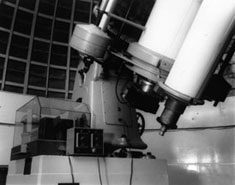 Although the 12-inch Zeiss Refractor is a telescope of professional quality, it is small by professional standards. The length of its tube is the same as the width of the 200-inch (5 meter) mirror of the Hale Telescope at Palomar! It was chosen because, for visual use, it provides about as sharp a view as is possible from the earth’s surface when used on the bright objects appropriate for public viewing.

The urban location of the telescope convinced Walter Adams, director of the Mt. Wilson Observatory in the 1930s, that the surrounding lights of Los Angeles would keep the 12-inch from ever doing useful research.

This opinion, however, did not long deter Griffith’s staff from trying! In 1940, two young staff members, George Herbig (later to go on to become an expert on young stellar systems at Lick Observatory and the University of Hawaii) and George Bunton (subsequently the Manager of the Morrison and Bishop Planetariums), designed a planetary camera which demonstrated that the telescope was excellent for photographing the moon and planets, eventually making Griffith Observatory the source for many illustrations used in astronomy texts and newspapers.

Staff astronomer Paul Roques developed a research program to study flare stars, faint red stars that undergo dramatic, sudden, and outbursts in brightness for a few minutes before settling down. Using light-amplifying equipment that became available after World War II, Roques carried out a research program between 1952 and 1969 that netted the first record of the complete cycle of a flare star outburst, tracing the stages of the event on a chart recorder. Roques also monitored and searched for flare stars photographically with an automatic system between 1960 and 1971.

The addition of a 9½-inch Zeiss telescope in 1955, previously mounted for more than two decades on the roof of the car of Whittier amateur astronomer Shelly Stoody, aided Roques in the precise aiming and guiding needed for his photoelectric work.

Sometimes Roques would be joined by volunteer assistants, and several times in the 1950s the telescope was used by the cosmologist Fritz Zwicky (discoverer of dark matter, neutron stars, and – with Walter Baade – of supernovae).

On special occasions since 1951, successive generations of television cameras have been attached to the 12-inch or 9½-inch telescopes to send images to TV stations for broadcast or to monitors within the building, or to project onto the dome of the planetarium. The current camera allowed tens of thousands of visitors to view live images of Jupiter on monitors set up around the Observatory during the week that it was impacted by comet Shoemaker-Levy 9 in July, 1994. 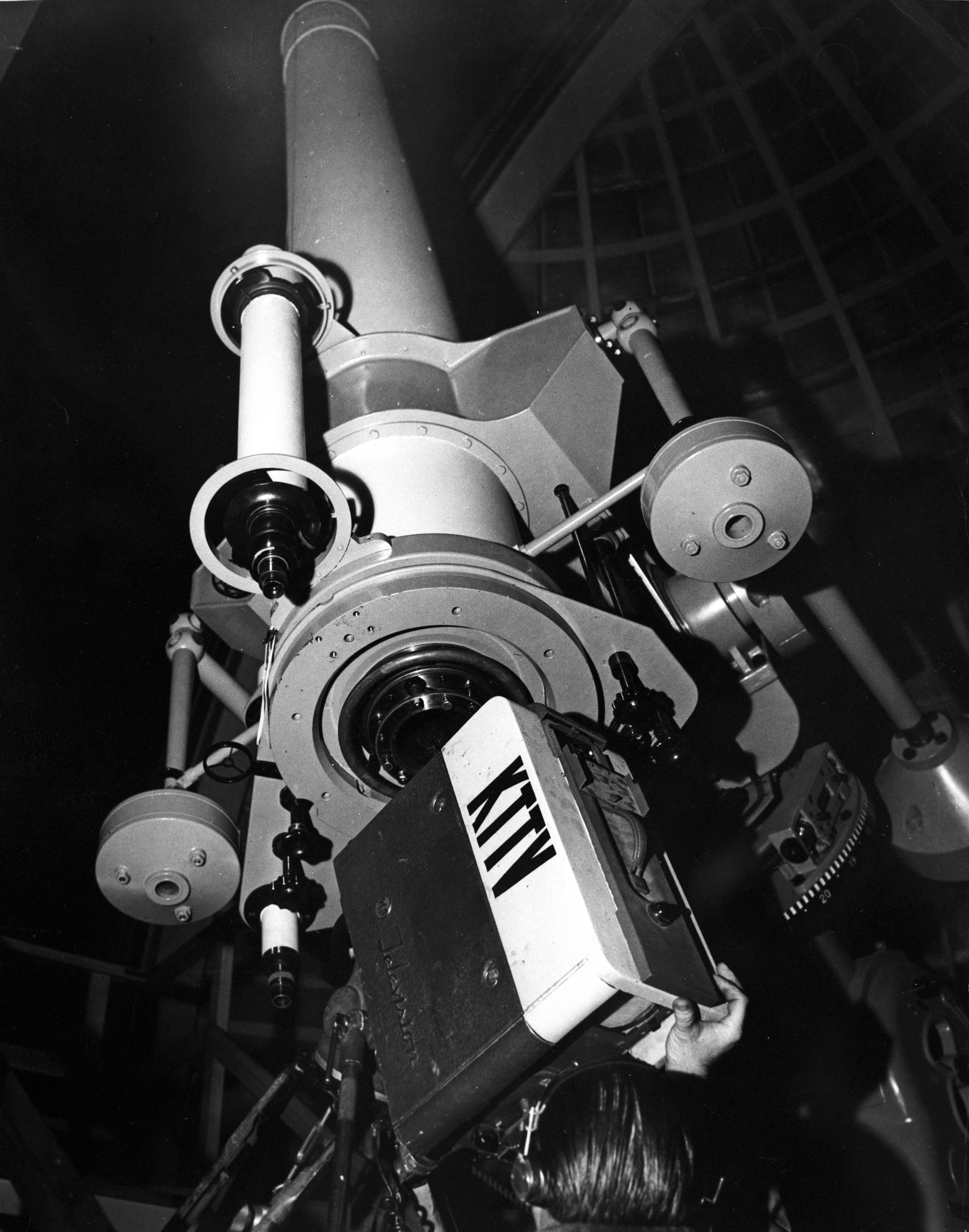 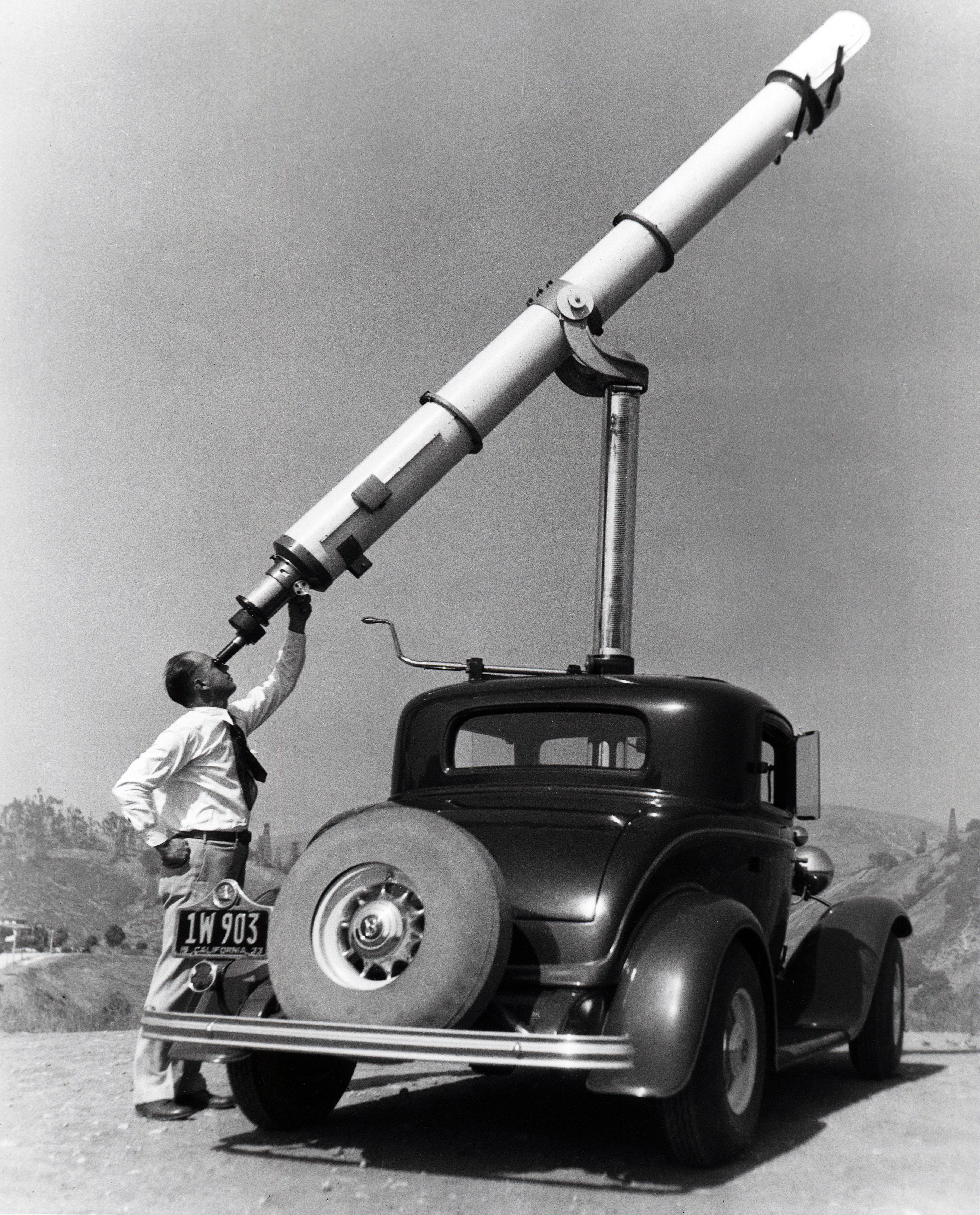 Shelly Stoody of Whittier, California and his mobile 9½-inch Zeiss Refractor in 1933. 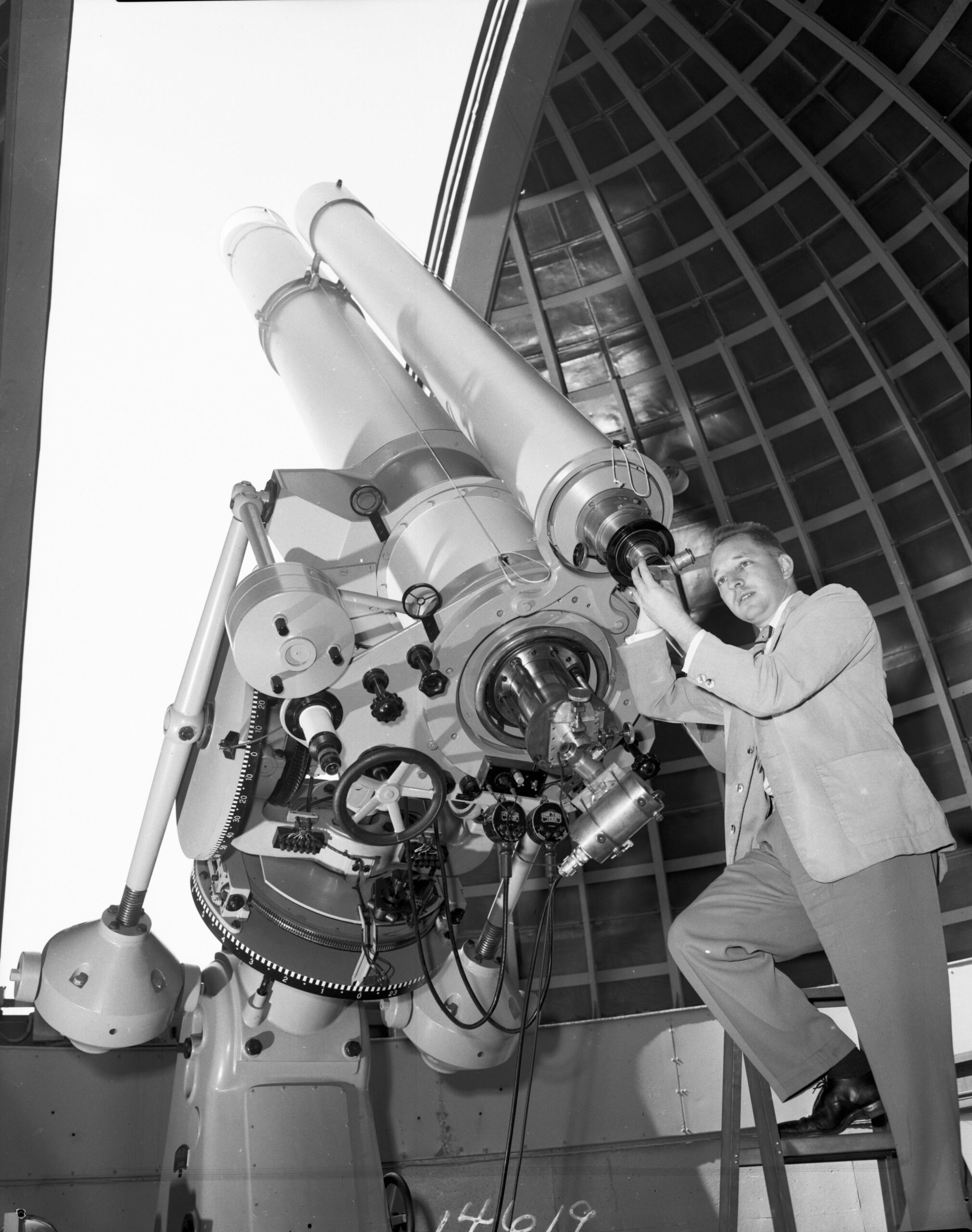 Paul Roques with the photometer, 1955. The 9½-inch refractor had just been mounted piggyback onto the 12-inch to assist Paul’s research program. 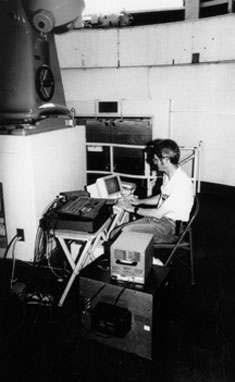 Volunteer Ernie Williams operates a CCD camera and video camera mounted to the telescopes to provide live images of Jupiter during the impacts of the fragmented Shoemaker-Levy 9 in July, 1994.