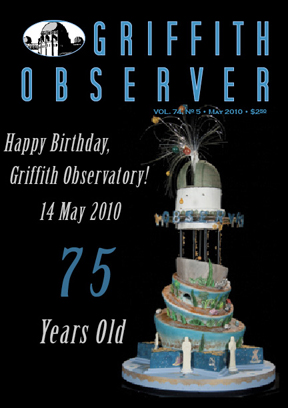 On May 14, 1935, Los Angeles civic, scientific, and cultural leaders gathered on the side of Mt. Hollywood to celebrate the opening of Griffith Observatory. Only the third planetarium in the U.S. – and the first along the Pacific Rim – the Observatory was the vision of Colonel Griffith J. Griffith, who believed in the transforming power of astronomical observation and cosmic inspiration. Review some of the notable moments in the Observatory’s history here.

That day also marked the transfer of the completed building and grounds from Colonel Griffith’s trust to the City of Los Angeles. In the last 75 years, Griffith Observatory has become the most visited public observatory in the world. Owned and operated by the City of Los Angeles Department of Recreation and Parks, the Observatory has welcomed more than 73 million visitors and is an icon of southern California.

We hope you will join us during our year-long celebration of Griffith Observatory’s diamond anniversary.

Astronomy writer Carolyn Collins Petersen posted a story about the Observatory’s birthday as the May 15 entry on the 365 Days of Astronomy blog. Listen to her story. 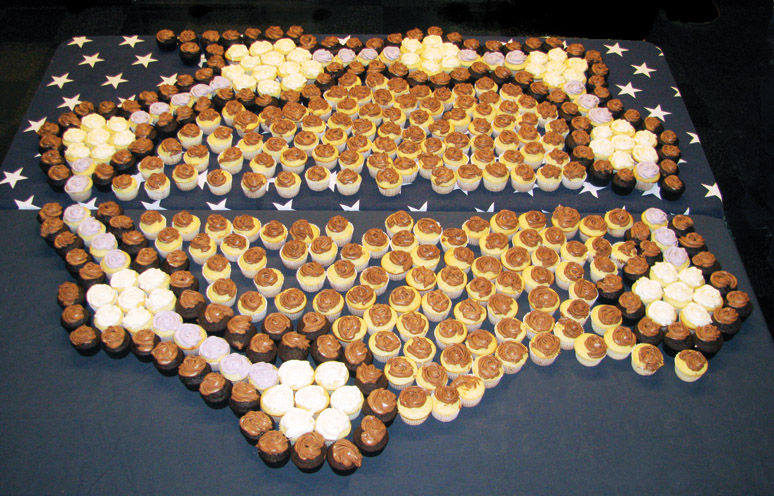 Griffith Observatory got the party started at 11:30 a.m. on Friday, May 14, with the unveiling of the 75th anniversary banner above the north doors of the building.  That was followed by the presentation of a City Council proclamation by Los Angeles City Councilmember Tom LaBonge.  Seventy-five birthday balloons were then deployed from each of the Observatory’s two telescope domes.  The ceremony ended with an astronomical presentation of cupcakes (provided by Temptations Cupcakes), a rousing rendition of “Happy Birthday”, and a group picture of all those in attendance. 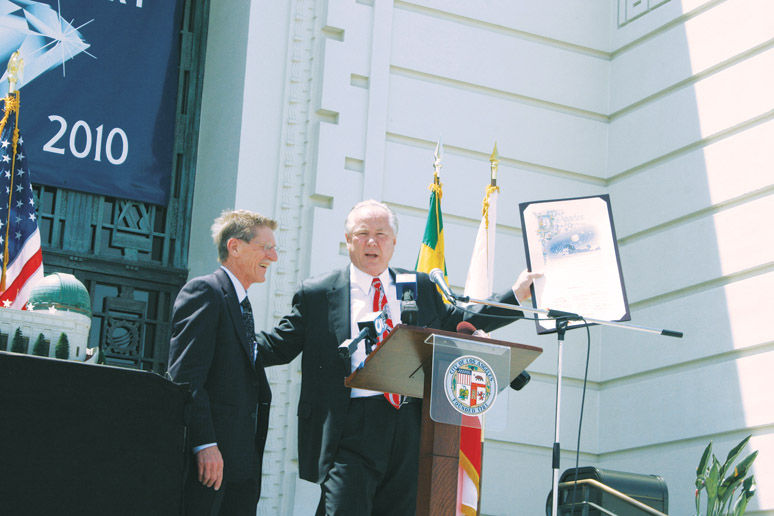 The birthday excitement continued the next night, as Friends Of The Observatory presented Cosmic Conjunction 2010: Diamond Nights * Northern Lights, a celebration to raise funds for the Observatory’s education programs.  Those attending the benefit were the first to see Light of the Valkyries, the new, live planetarium show set to the dramatic music of Richard Wagner’s Ring Cycle.  After the exclusive show premiered in the Samuel Oschin Planetarium, visitors descended for dinner as shimmering northern lights bathed the Observatory’s grand staircase. Proceeds from Cosmic Conjunction 2010, Griffith Observatory’s second annual signature event connecting astronomy and the arts, fund the educational program that brings thousands of school children to the Observatory to connect with astronomy through music and imaginative storytelling.

The Observatory premieres its fourth new program in the Samuel Oschin Planetarium. Light of the Valkyries takes audiences on a voyage of Viking cosmology and explores the true nature of the aurora borealis – the northern lights. The show explores the source of the northern lights (the Sun) and viewers thrill to a cosmic light show set to one of the most iconic pieces of music of all time, Wagner’s Ride of the Valkyries. The program was the Observatory’s contribution to the city-wide Ring Festival LA, a celebration of the arts associated with the LA Opera’s grand presentation of Wagner’s Ring Cycle. The show is offered twice each day, at 5:15 p.m. and 7:45 p.m.