See it at Griffith Observatory

Watch it live on the internet 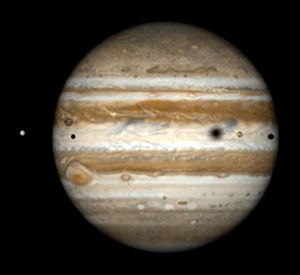 A rare celestial event will take place on Friday night, January 23, 2015, when the shadows of three of Jupiter’s four largest moons will fall upon Jupiter at the same time. The shadows of these three moons – Io, Europa, and Callisto – will cross Jupiter’s disk throughout the evening. The moons will also cross in front of the planet. Galileo discovered these moons, and one more, Ganymede, in 1610. Ganymede will also be visible on January 23, but unlike the others it will not cast a shadow on Jupiter. Three moon shadows will not appear simultaneously on Jupiter again, from Los Angeles, until 2032.

As if the triple-shadow transit weren’t enough, another rare Jupiter shadow event precedes it. Io will begin to cross in front of Jupiter’s disk at 8:54 p.m., PST, 19 minutes after its shadow. At 9:40 p.m., PST, swiftly-moving Io will be eclipsed as it runs into the shadow of slower-moving Callisto. This will darken Io, and make it suddenly conspicuous as a black dot against the bright clouds of Jupiter. Io’s shadow on the planet will merge with Callisto’s shadow for 19 minutes. Then, Io will again become visible at 10:12 p.m., PST, when it appears as a bright speck in front of Callisto’s giant shadow.

An animation that shows what the triple-shadow transit will look like is on Griffith Observatory’s YouTube channel at https://www.youtube.com/user/GriffithObservatory.

Griffith Observatory will provide a live video stream of the Jupiter triple-shadow transit on its Livestream channel at http://new.livestream.com/GriffithObservatoryTV. The webcast will begin at 8:30 p.m., and conclude at 11:00 p.m. A time-lapse video of the event will be available in the days that follow the event on Griffith Observatory’s YouTube channel.

Telescopes from the Los Angeles Astronomical Society and the Planetary Society will join Griffith Observatory’s telescopes to witness the event. Griffith Observatory will close as usual at 10:00 p.m., PST, but the lawn will remain open until 11:00 p.m., PST. The inbound Griffith Park gate at Vermont Avenue will also close at 10:00 p.m., PST, as usual, but visitors who are already at Griffith Observatory may remain through the end of the triple-shadow transit. All visitors must leave by 11:00 p.m., PST. Our regular monthly public star party will be held the following night, Saturday, January 24, 2015, during which visitors will be able to see the planets Mercury, Venus, Mars, Uranus, and Neptune, as well as the moon, and comet Lovejoy, C/2014 Q2.

Watch a Video Timeline for the Transit