Everything around us contains material that was once part of a star. The cells in our bodies, the air we breathe, and materials that make up the planets in our solar system are all linked to the stars through chemical elements.

Hydrogen and helium are the two most abundant elements. They were made in the Big Bang more than 13 billion years ago. Others, like oxygen and iron, are created deep inside stars. Supernova explosions blast them into space and form even heavier elements, such as gold and uranium.

Chemical elements are the building blocks of everything. The Sun and stars, the silicon chips in our computers, and all the cells in our bodies are collections of elements.

Hydrogen is the lightest and most plentiful element. It has one proton, one electron, and an atomic number of 1. It was created in the Big Bang, along with helium. The other elements up to uranium (number 92) are made in stars.

Elements Made by People 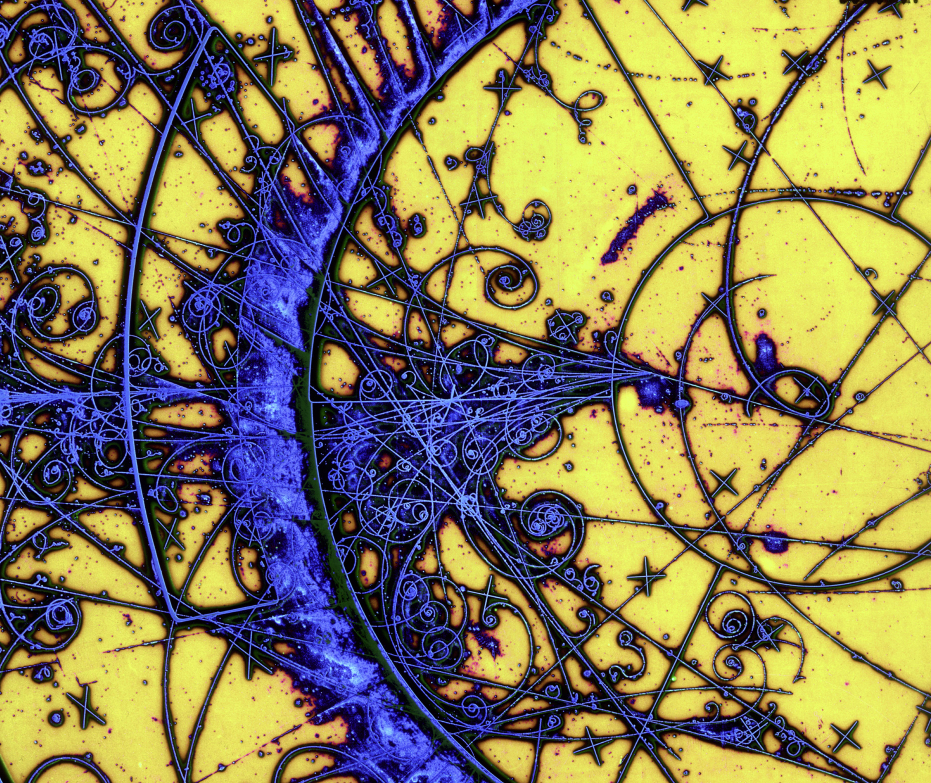 When physicists smash smaller atoms together during experiments in nuclear accelerators and reactors, they create elements that have atomic numbers higher than 92. Neptunium, californium, and plutonium (which is used in spacecraft power supplies) are good examples of these elements. Scientists also study the tracks atomic particles make in bubble chambers during high-speed experiments.

Big Bang: The nuclei of the three most basic and plentiful elements in the universe began forming during the first 100 seconds after the Big Bang.

Gases: Most elements are solids and liquids at room temperature. Eleven are gases.

Stars: Atomic reactions deep inside stars combine atoms to form many of the familiar elements that make up planets, stars, galaxies, and us.

Humans: Our bodies contain more than two dozen elements. We are made of material that was created in stars.

How Elements Reach Our Bodies 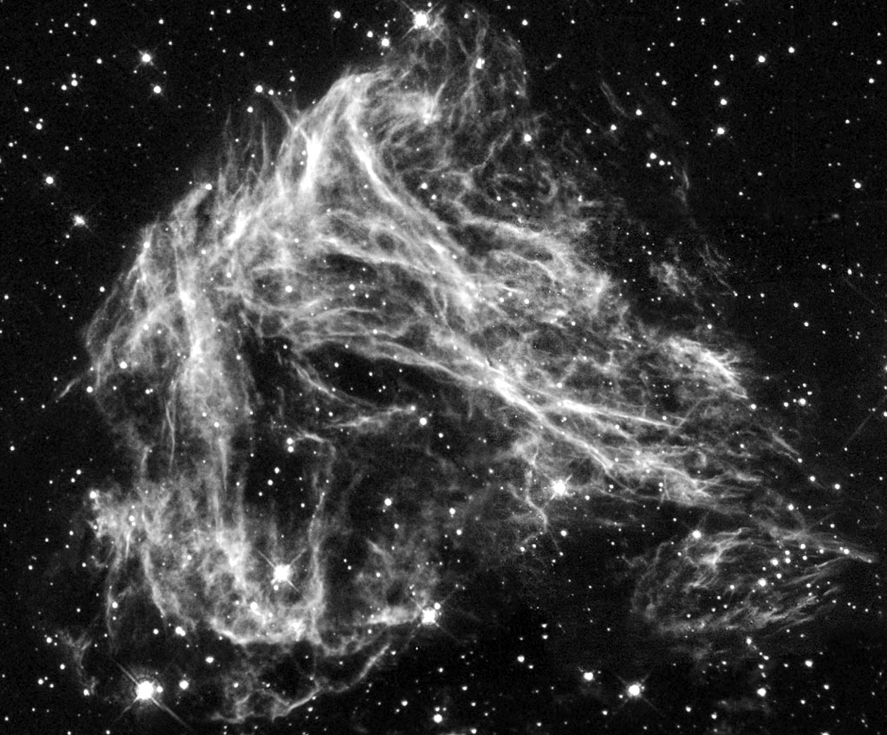 If you want to know where most elements originate, look at the night sky. Most of the stars and all the planets you see came from materials cooked up deep inside other stars. When those stars died, their elements were scattered into space in gas and dust clouds.

This wispy nebula (LMC N49) is the graveyard of a star that exploded as a supernova. Material in the cloud may become new stars. 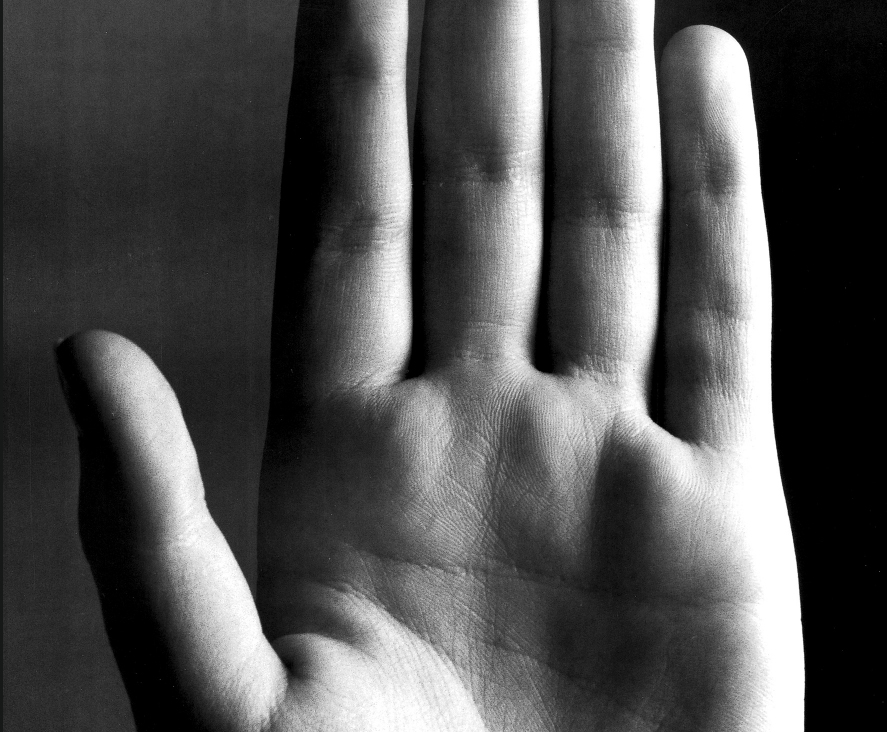 We, too, are part of the cosmic recycling process. It began billions of years ago inside an ancient star. The calcium in our bones, iron in our blood, and oxygen in our lungs were all created inside that long-dead star.

Look at your hand. It is a piece of the universe. Its millions of skin cells are each made of elements from stars. 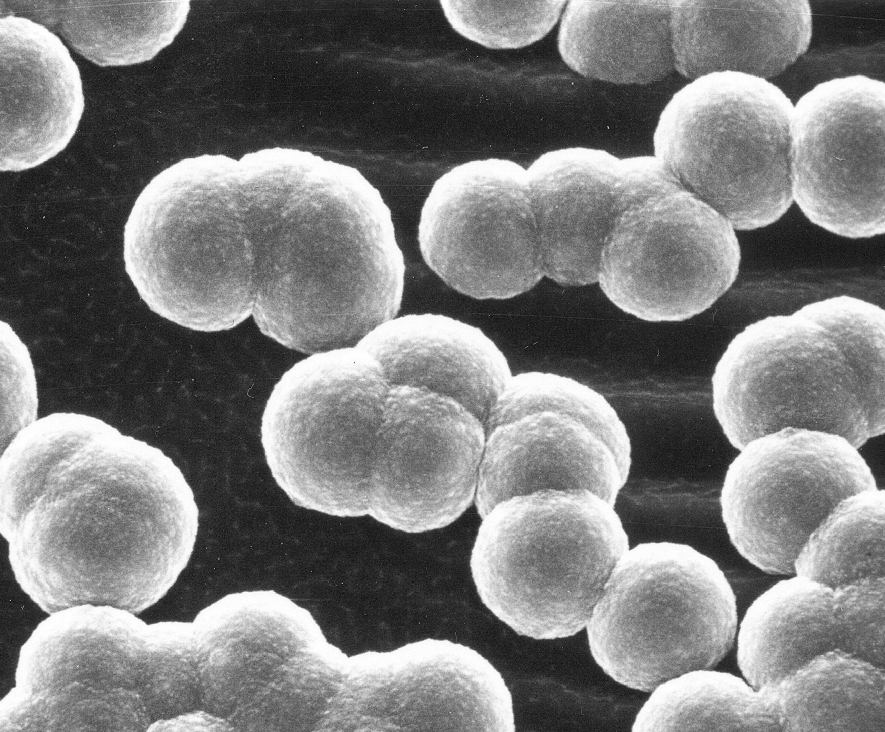 Elements are the building blocks of the universe. Atoms are the basic units of elements. Most atoms are made up of three types of particles: protons, neutrons, and electrons. Every structure in the cosmos is made of atoms from many different elements.

Each droplet of carbon shown here is a tenth of the width of a human hair and contains thousands of atoms.

The human body is mostly hydrogen and oxygen, with traces of other elements (color coded to the elements table). 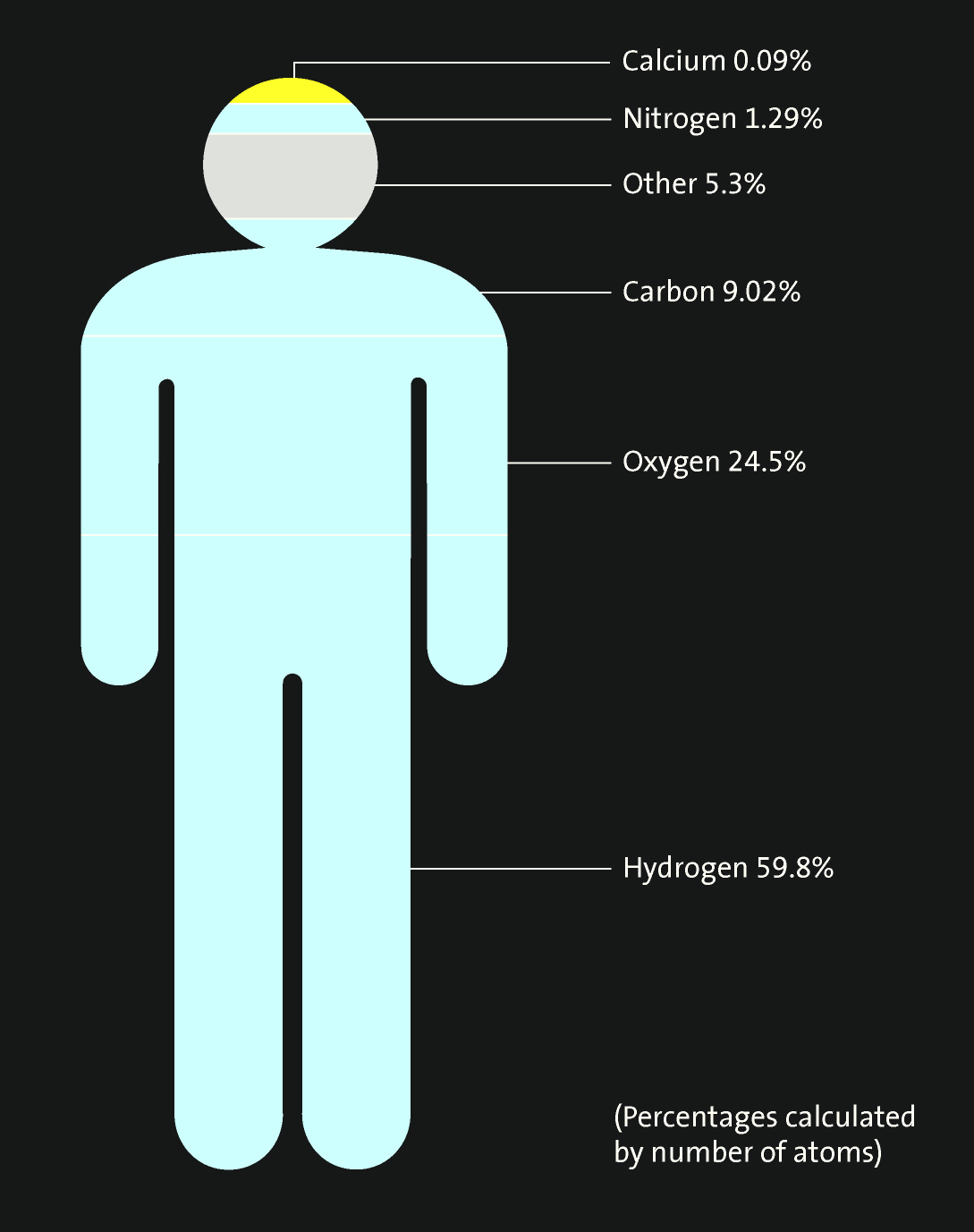 Creation of Elements in Supernova Explosions

Thanks to stars and the elements they create, the universe renews itself. When stars die, their material gets scattered through space as the seeds for new generations of stars. The heaviest elements are created in huge stellar explosions like Supernova 1987a. Temperatures and pressures in these outbursts are so high that atoms fuse to make more complex elements, such as lead, gold, and uranium. 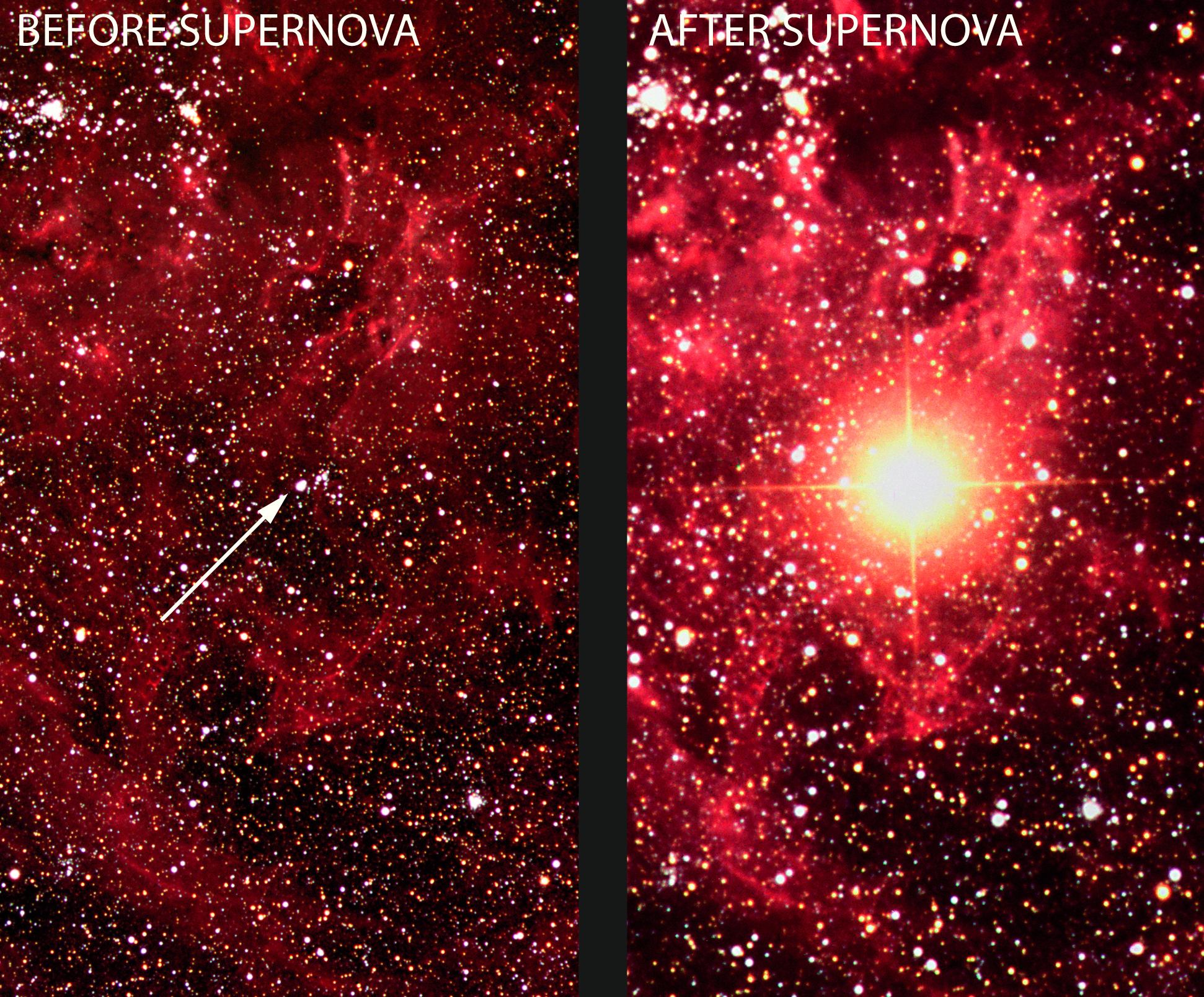 The Fingerprints of Elements

Light from celestial objects identifies the chemical elements they contain. Each element has a specific fingerprint, which we can see with a spectroscope. Helium and neon are made inside stars. Helium’s spectral fingerprint is simple, while neon has many more lines. Elements like krypton and mercury are created in supernova explosions. 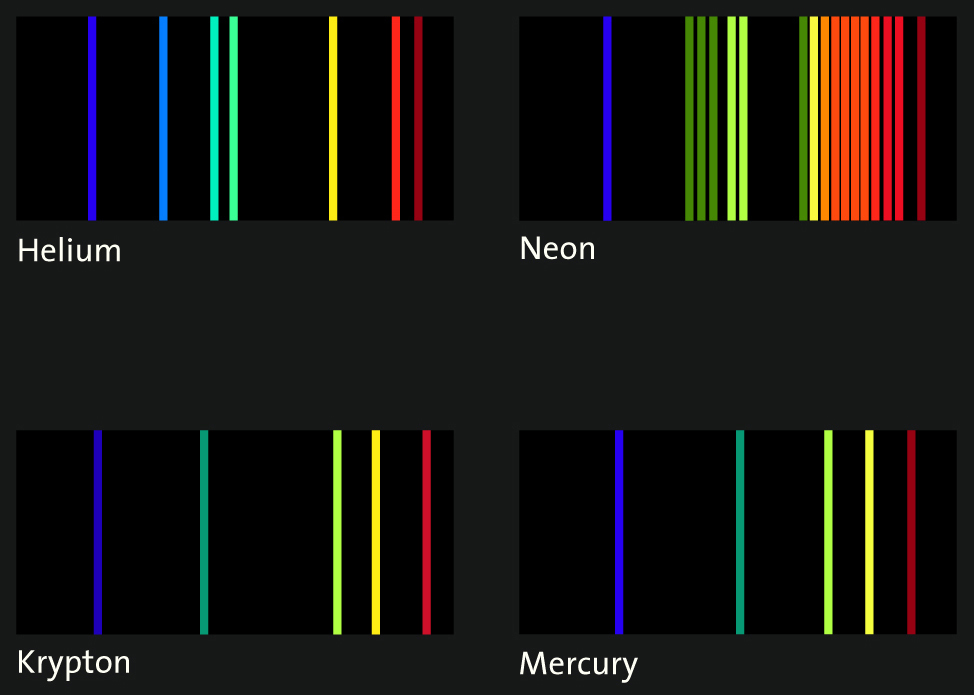 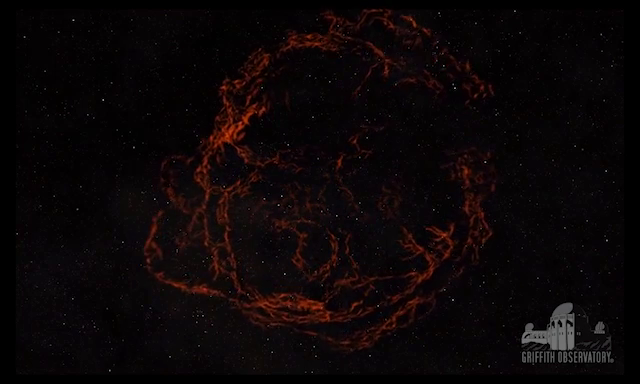