On the vaulted ceiling and upper walls of the W. M. Keck Foundation Central Rotunda are Griffith Observatory’s greatest artistic treasure: the Hugo Ballin Murals. Workers have carefully and completely restored the murals so that they appear as they did when first painted by muralist, film producer, and author Hugo Ballin (1879-1956) in 1934.

Medieval cathedrals told stories in stone. The Ballin ceiling mural celebrates classical celestial mythology, with images of Atlas, the four winds, the planets as gods, and the twelve constellations of the zodiac. The eight rectangular Ballin wall murals depict the “Advancement of Science” with panels on astronomy, aeronautics, navigation, civil engineering, metallurgy and electricity, time, geology and biology, and mathematics and physics. 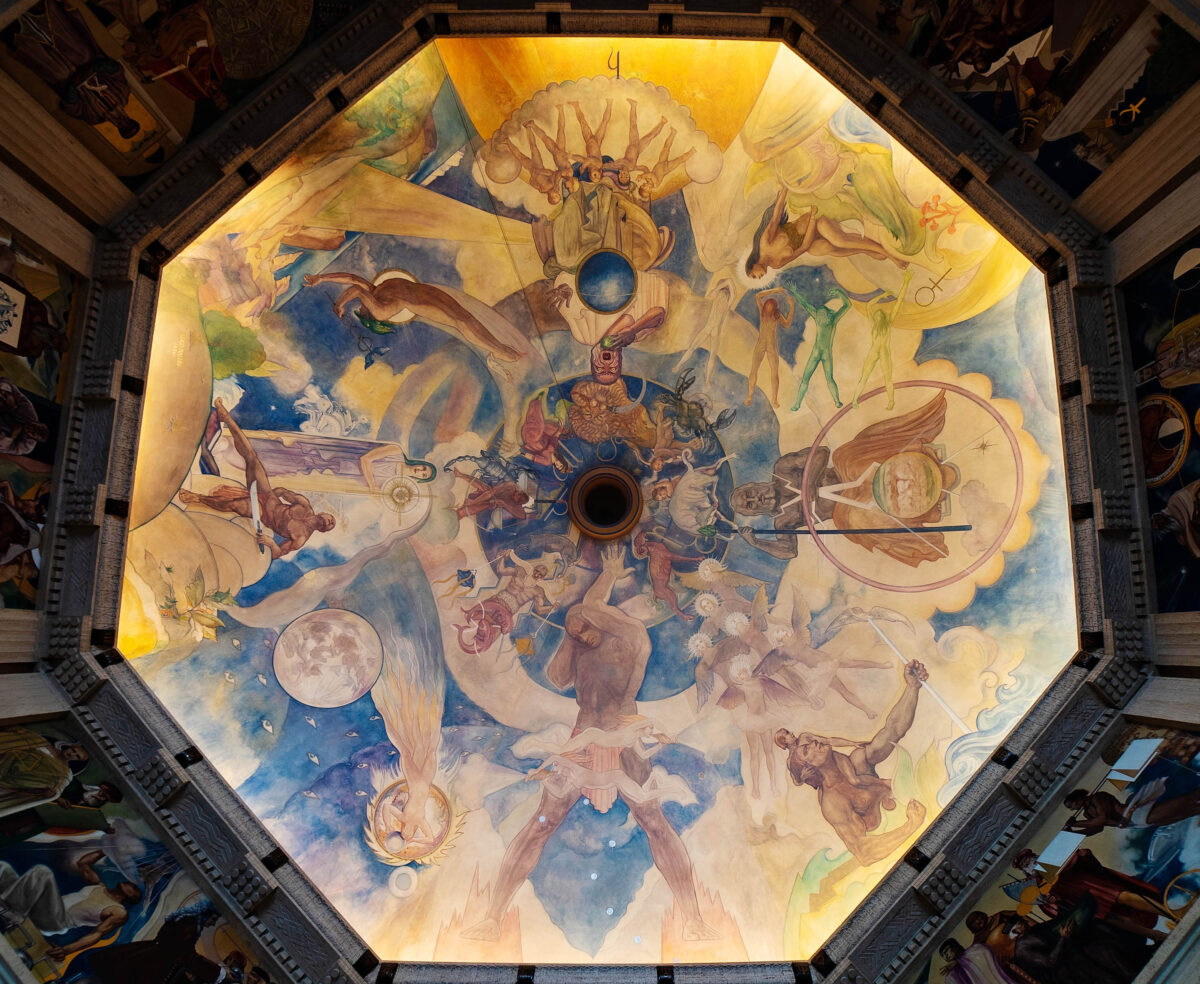 In ancient times, people used myths to understand what they saw in the sky. In the murals overhead, 1930s painter Hugo Ballin illustrated those early stories using a parade of Classical figures. Atlas holds the zodiac signs, followed by the Pleiades, and then Jupiter and his thunderbolts. Venus and the four seasons are next, preceding Saturn, Mercury chasing Argos, and an observer next to a woman holding the Star of Bethlehem. The mural continues on to the Moon and a comet.

Artist Hugo Ballin celebrated the progress of science through his spectacular art. These eight panels represent what he called the “Advancement of Science from Remote Periods to Present Times.” Each one shows how science and engineering changed throughout history up to the time Griffith Observatory opened to the public in 1935. The fields shown are aeronautics, navigation, civil engineering, metallurgy and electricity, time, geology and biology, mathematics and physics, and astronomy. 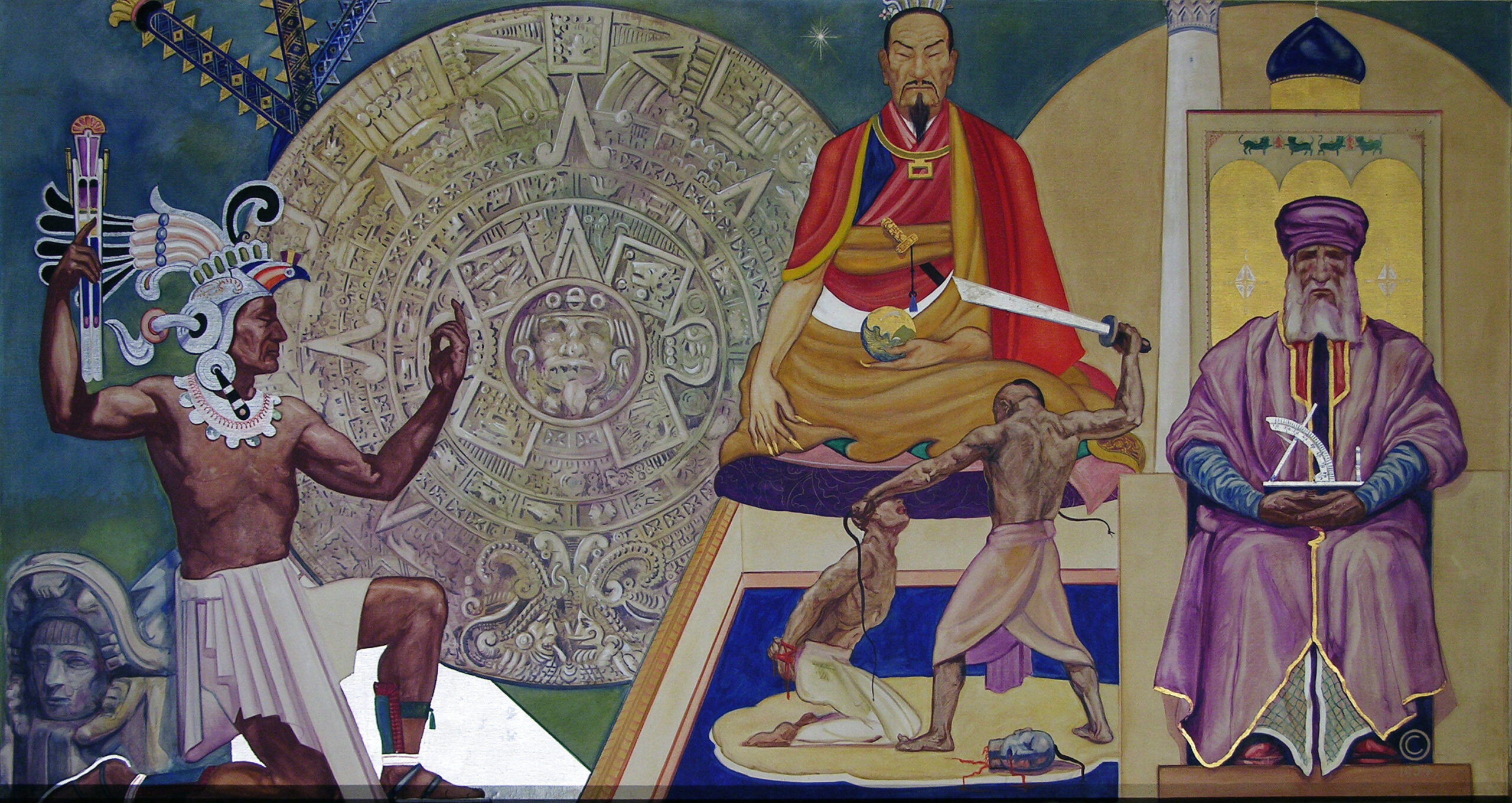 To the left an Aztec points to an ancient calendar stone. Emperor Yao of China sits witnessing the execution of magicians who failed to prevent a solar eclipse. On the right is Ulugh Beg, grandson of Tamerlane and keen celestial observer. 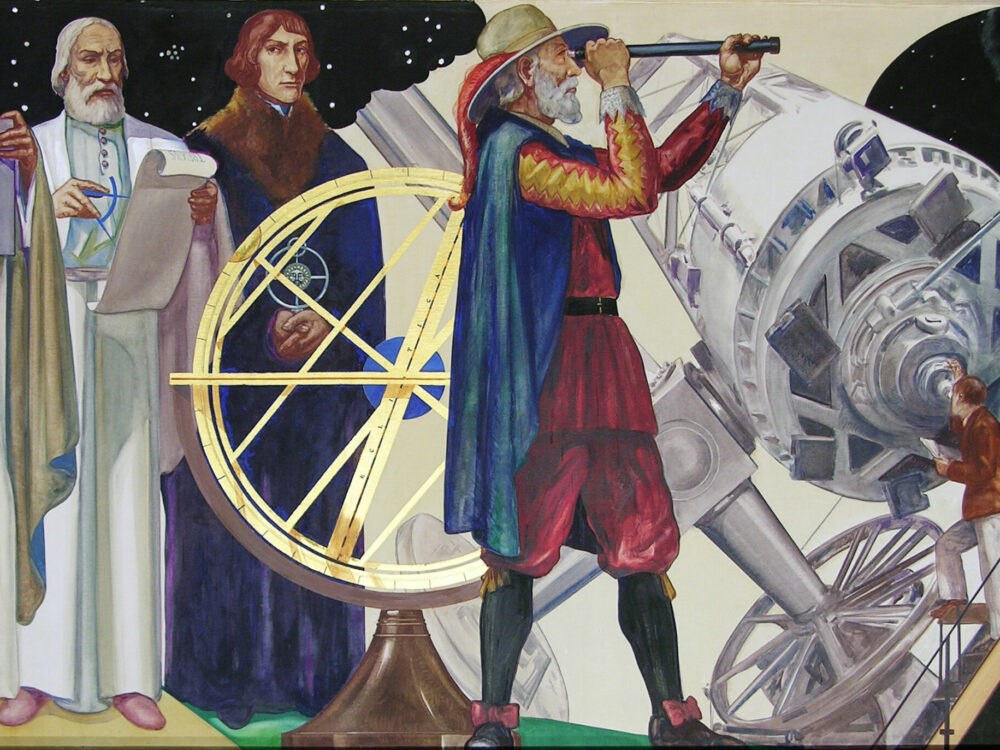 On the left, Arzachel consults his early astronomical tables. John of Hollywood works on an influential astronomical text. Copernicus, who replaced the Earth with the Sun as the center of the solar system, stands near Galileo, whose telescope is dwarfed by a modern version. 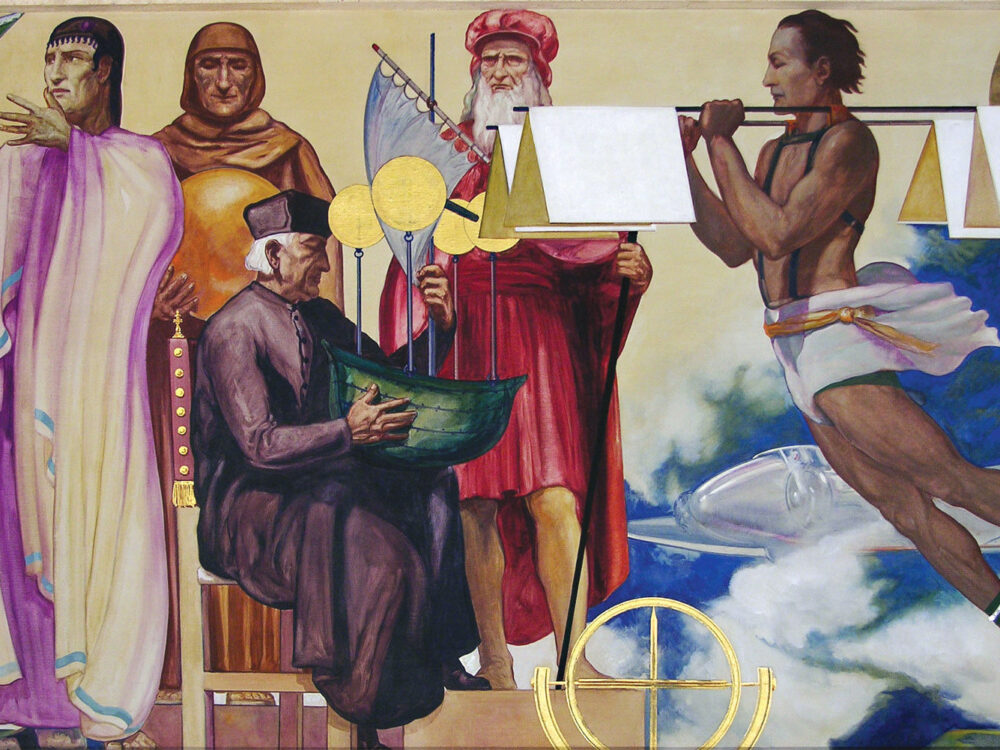 The artist portrays Archytas of Tarentum with his wooden pigeon; then Roger Bacon with his floating ball; Francesco de Lana with a flying boat model; Leonardo da Vinci, whose models perhaps needed only an engine; and Besnier, gliding successfully in 1678. 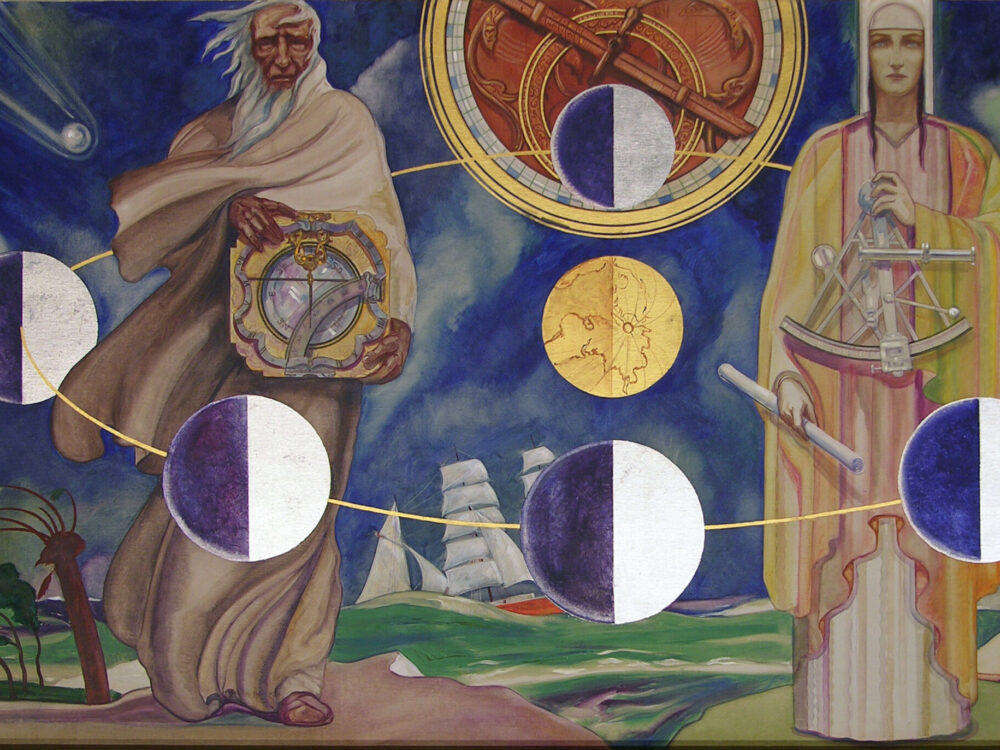 On the left, a symbolic figure of the Wind grasps a sundial and compass. Calm is shown to the right, holding a modern sextant. The moon orbits diagrammatically around the two figures. At the top is an astrolabe, an early astronomical instrument. 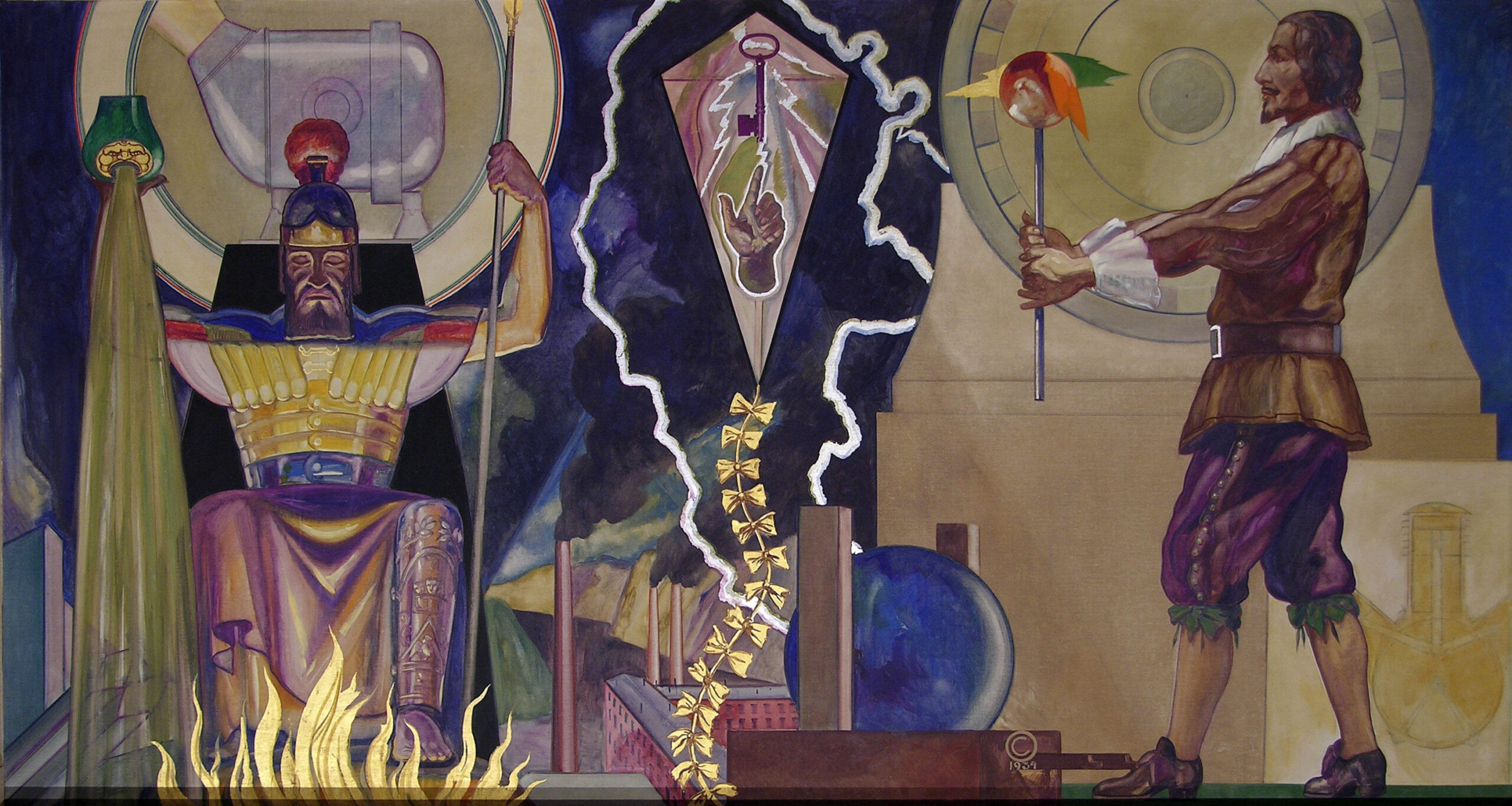 On the left, St. Florian, patron of metallurgists, sits pouring water over fire beneath a converter for steel-making. a kite and key recall Benjamin Franklin’s discovery of lightning’s electrical nature. Otto von Guericke holds an early device which produced electricity through friction. 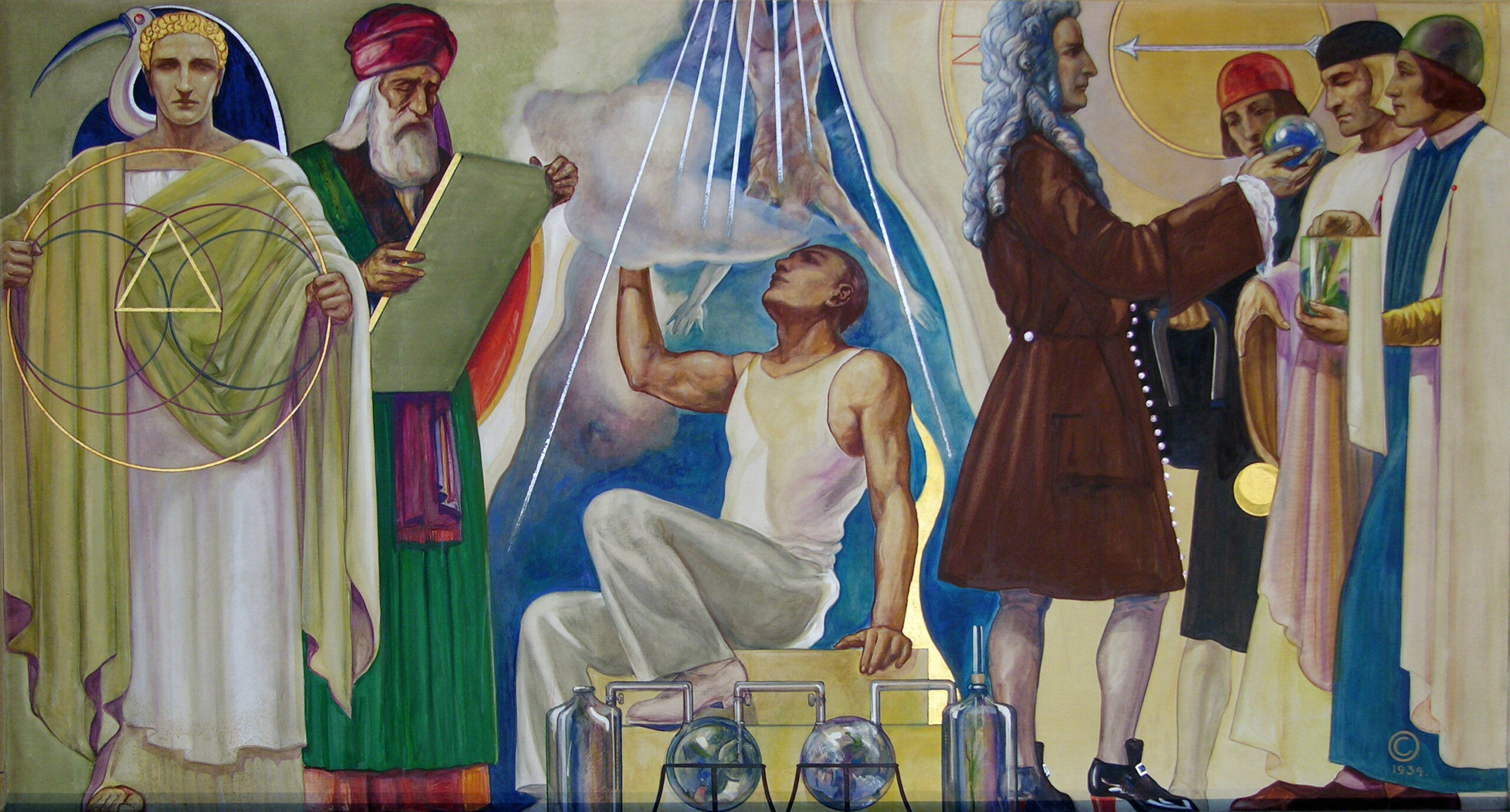 First is a Greek geometer, whose work derived from the Egyptians. Their influence is shown by the god Thoth, behind. An Arab looks at the important mathematical contributions of his culture. The seated man, looking into the murky cloud represents physics. Sir Isaac Newton, originator of calculus, talks with students on the right. 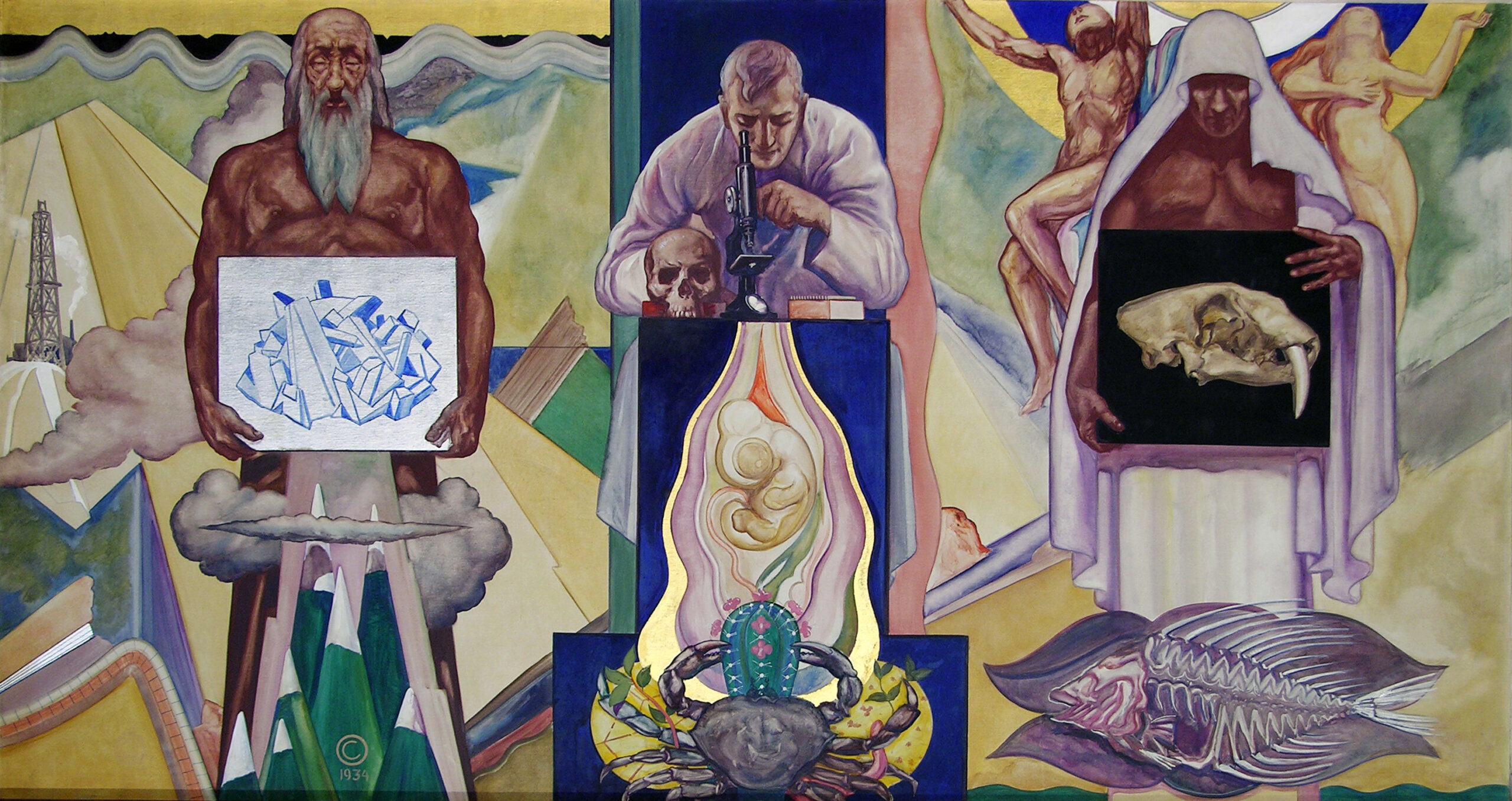 An old man symbolic of geology holds a card showing mineral crystals. Through a microscope, a biologist studies life with a chicken embryo, plant, and crab below. A man symbolizing paleontology shows a saber-toothed cat skull, with a fish skeleton below. 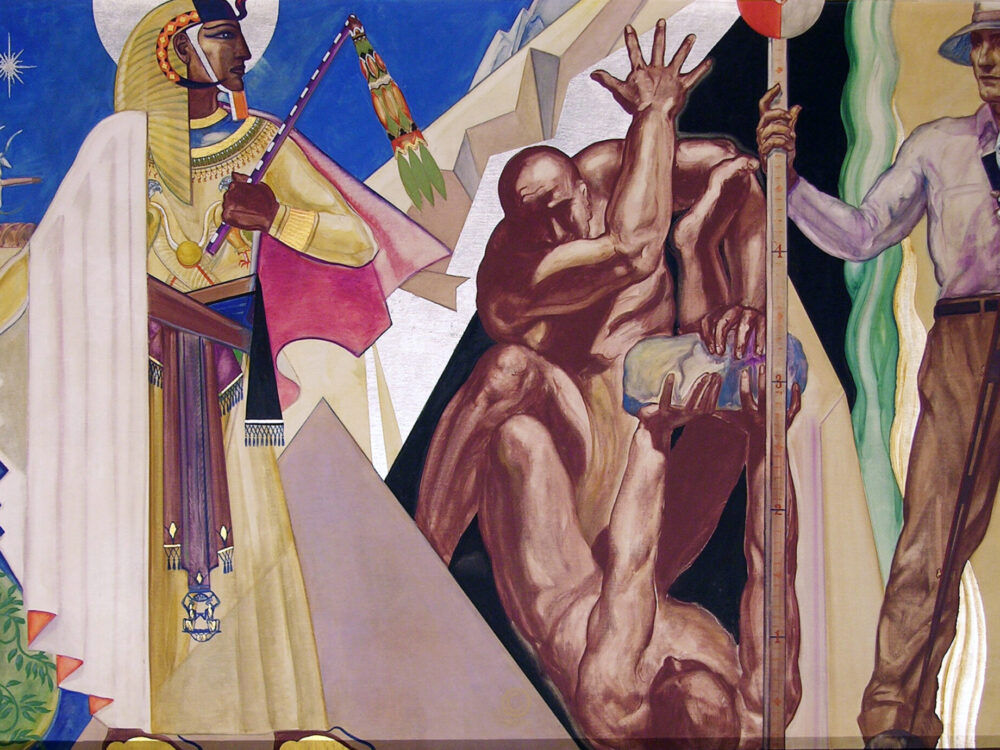 On the left, an ancient Egyptian stands before a pyramid, an impressive monument to ancient engineering. Two grappling figures represent forces within the earth associated with inevitable earthquakes which engineers must build to withstand. Modern engineering is represented by a surveyor and Hoover Dam.

In 2014, UCLA researched and prepared an online exhibit reviewing Ballin’s pioneering work in Los Angeles, including the murals at Griffith Observatory.