By manipulating optical tools, telescopes, lenses, and mirrors, on this “workbench” in the center of the gallery, visitors begin to understand how the introduction of the telescope profoundly changed our observation of the sky and our perception of our place in the universe.

In 1609, astronomer Galileo Galilei learned of the telescope — an invention that magnified the view of distant objects. He built one for himself with a tube and lenses, and used it to observe the sky.

Galileo resolved stars in the Milky Way, mapped the Moon’s surface, and discovered the moons of Jupiter. His work changed our view of the universe.

Galileo first spotted Jupiter’s moons on January 7, 1610. These little “stars” puzzled him, and so he noted their positions near Jupiter each night. After watching these points of light for a week, Galileo decided they were not stars but a collection of small worlds orbiting the giant planet. 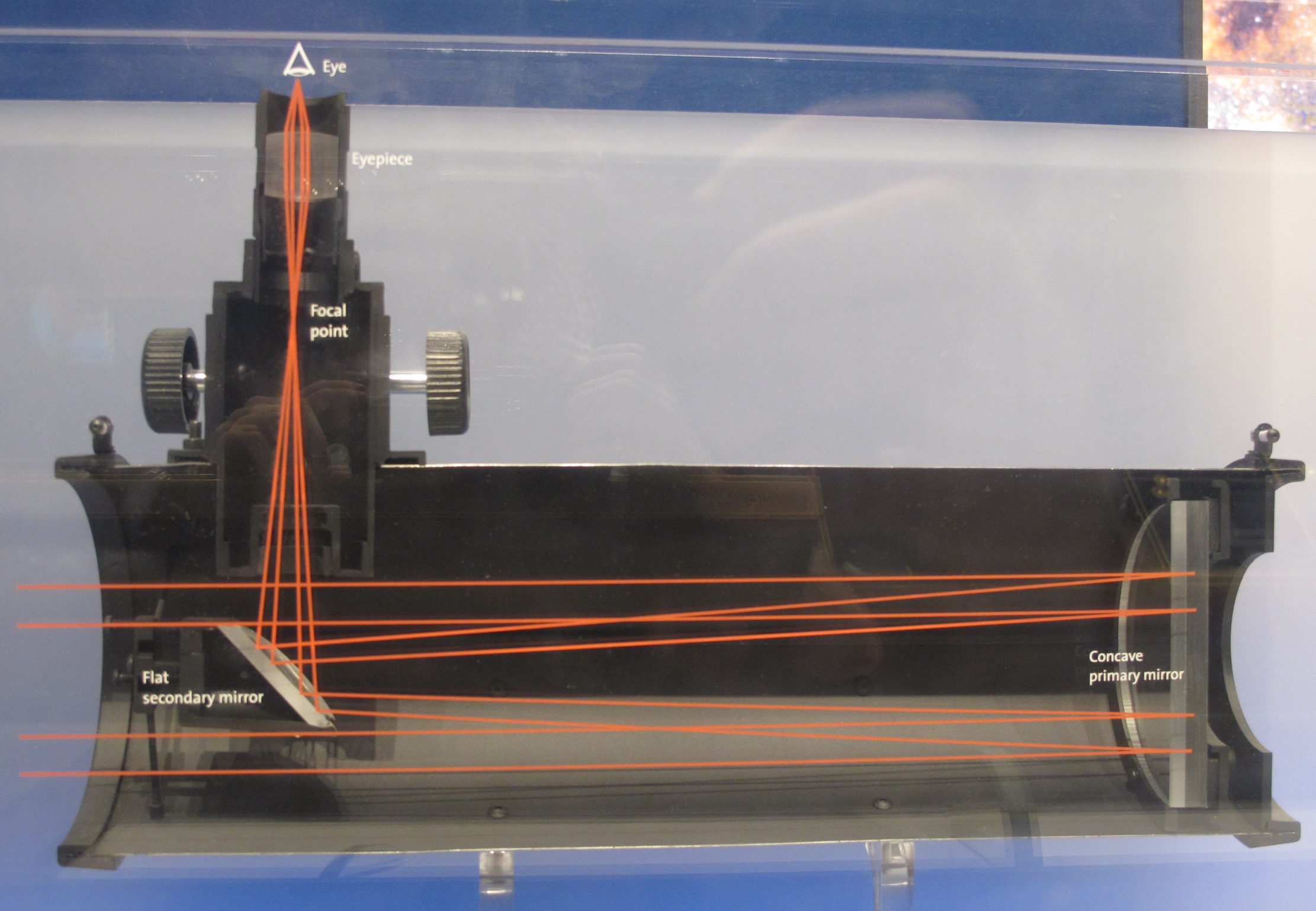 All telescopes are basically “light buckets.” They collect light from objects in the sky and use lenses and mirrors to focus it for our eyes. The light path through optics is the same for all telescopes, from personal instruments to those in research observatories. Telescopes let us see things smaller, fainter, and farther than we can observe with our eyes alone. 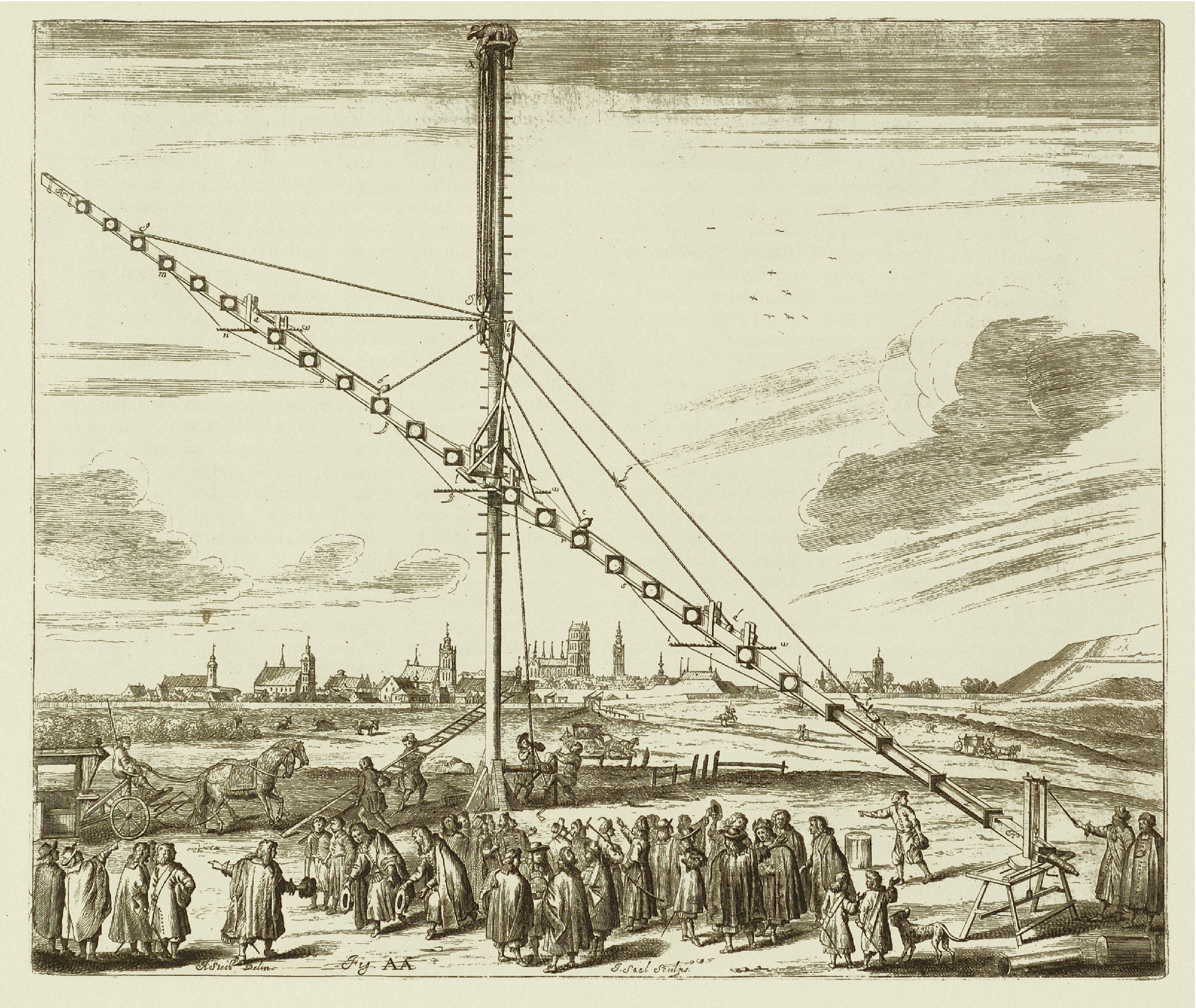 After the telescope was invented, astronomers scrambled to build bigger instruments. They used better lenses to improve the view and made longer tubes to get larger images. The biggest was 150 feet (46 m) long, built by Johannes Hevelius in 1673. The telescopes were hard to align, and wind gusts knocked them around. Eventually, astronomers found ways to construct better telescopes. 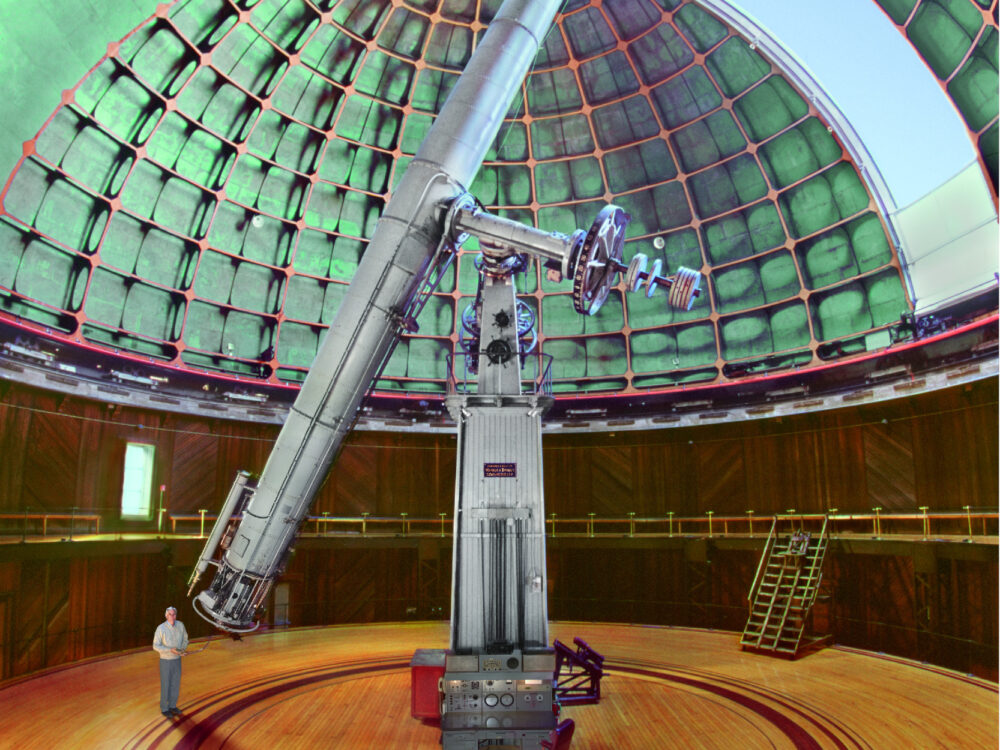 Many personal and smaller research telescopes are refractors, like the 36-inch (91.4-cm) Great Lick Refractor at Lick Observatory. Light enters at one end and is focused through curved glass lenses into an eyepiece at the other end. Galileo used a refractor to discover Jupiter’s companions and survey our Moon. This type of telescope was the principal kind used in observatories through the 1800s. 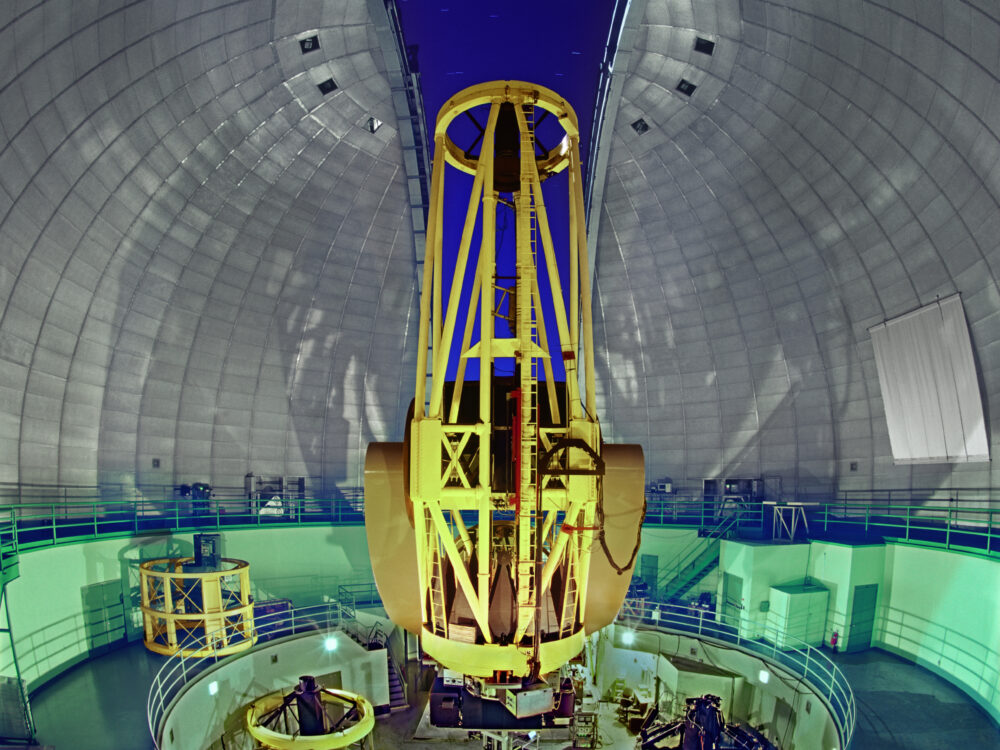 A reflector uses a primary mirror at one end to collect light and bounce it back to a secondary mirror. The light is then directed into an eyepiece. Today, most modern research observatories have reflectors, such as the 120-inch (3-m) Shane Telescope at Lick Observatory. On both types of telescopes, cameras and other instruments can be used in place of the eyepiece.

To study faint and distant objects, we need to make them appear bigger so we can see them. When a telescope magnifies the view, an object looks larger and closer. Magnification tells how many times larger something will look through a telescope. If you see something at 20X through a telescope, it is enlarged 20 times and appears to be 20 times closer to you.

Magnifying What We See

When you look at the Moon with your unaided eye, you see it at a magnification of 1X, or normal size. A telescope and an eyepiece magnify the view, making the Moon appear much larger and more detailed. 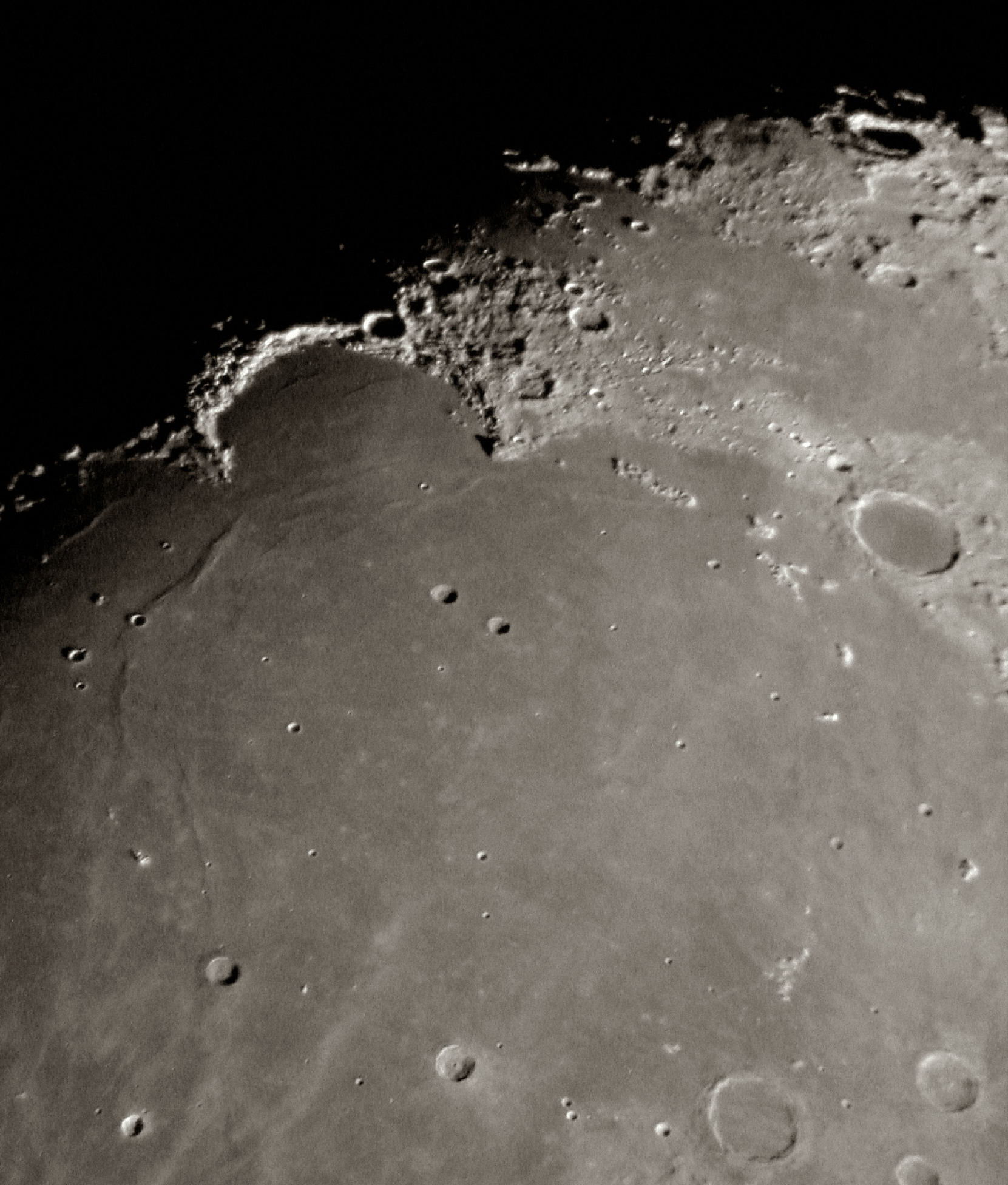 A telescope collects more light than your eye does, and also magnifies the view. The higher the magnification, the smaller the area you see and the better the resolution. When you magnify your view of the Moon, it appears to be closer and larger. You can see more details and clearly make out its craters, lava plains, and mountains.

If a telescope could not focus light, a magnified view of the Moon would just be a large, blurry image of a bright object. A telescope shows the Sinus Iridium region of the Moon. You can make out many smaller craters around a larger one that was flooded by lava. The two smaller ones at lower center were formed after the lava ﬂowed and cooled.

Most celestial objects appear dim or small because they are far away. Telescopes collect their light and focus it into a small area so we can see it. 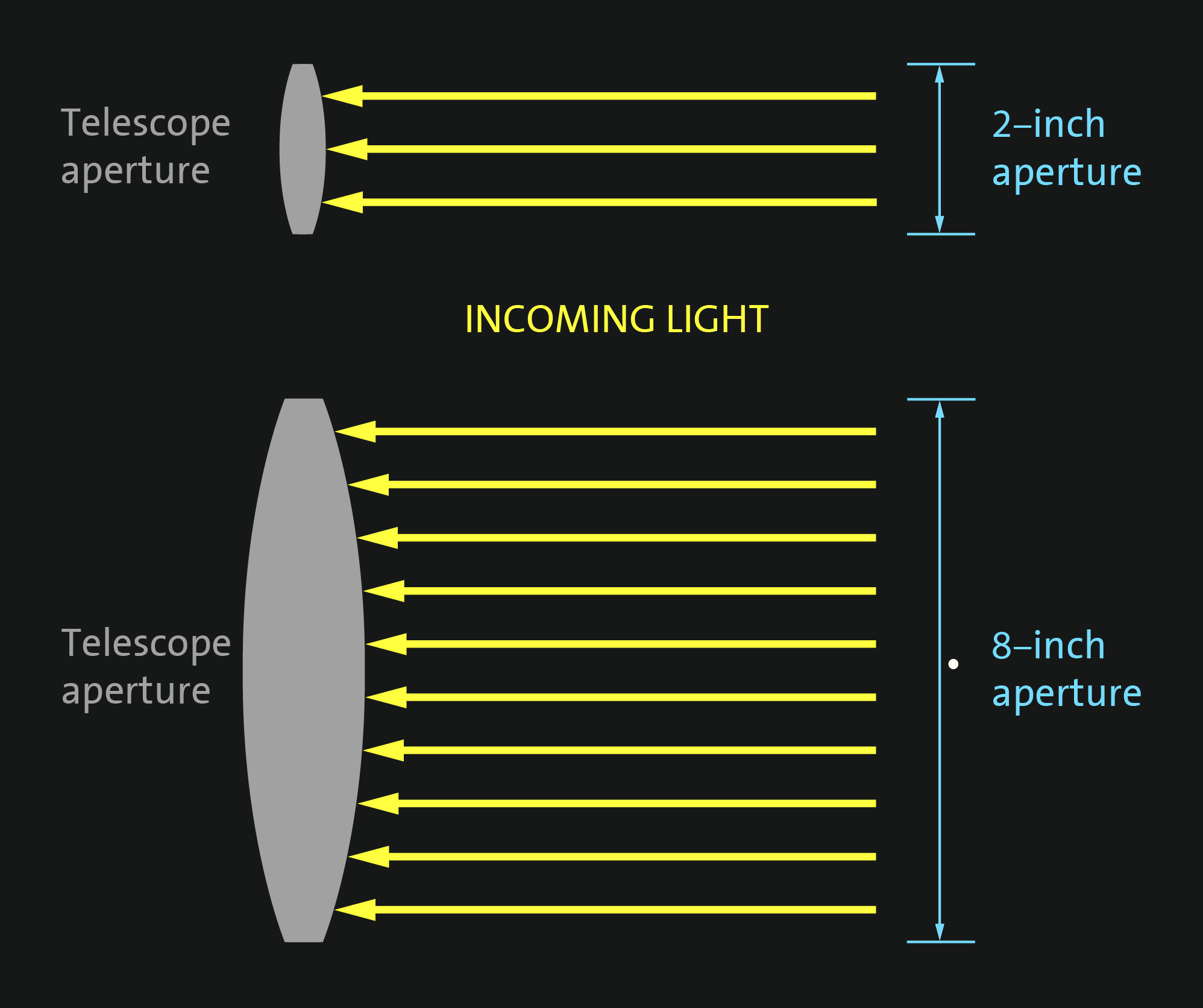 The aperture of a telescope—the size of the opening set by the diameter of its lens or mirror—determines how much light it can gather. The larger telescope on the table collects 800 times more light and can see 28 times farther into space than your eye. The smaller one collects less light and extends your view only about a quarter as far into space. along the western horizon.

Making Records of What We Observe

Like all good scientists, astronomers keep track of their work. The history of astronomy is marked by advances in observation and record-keeping. 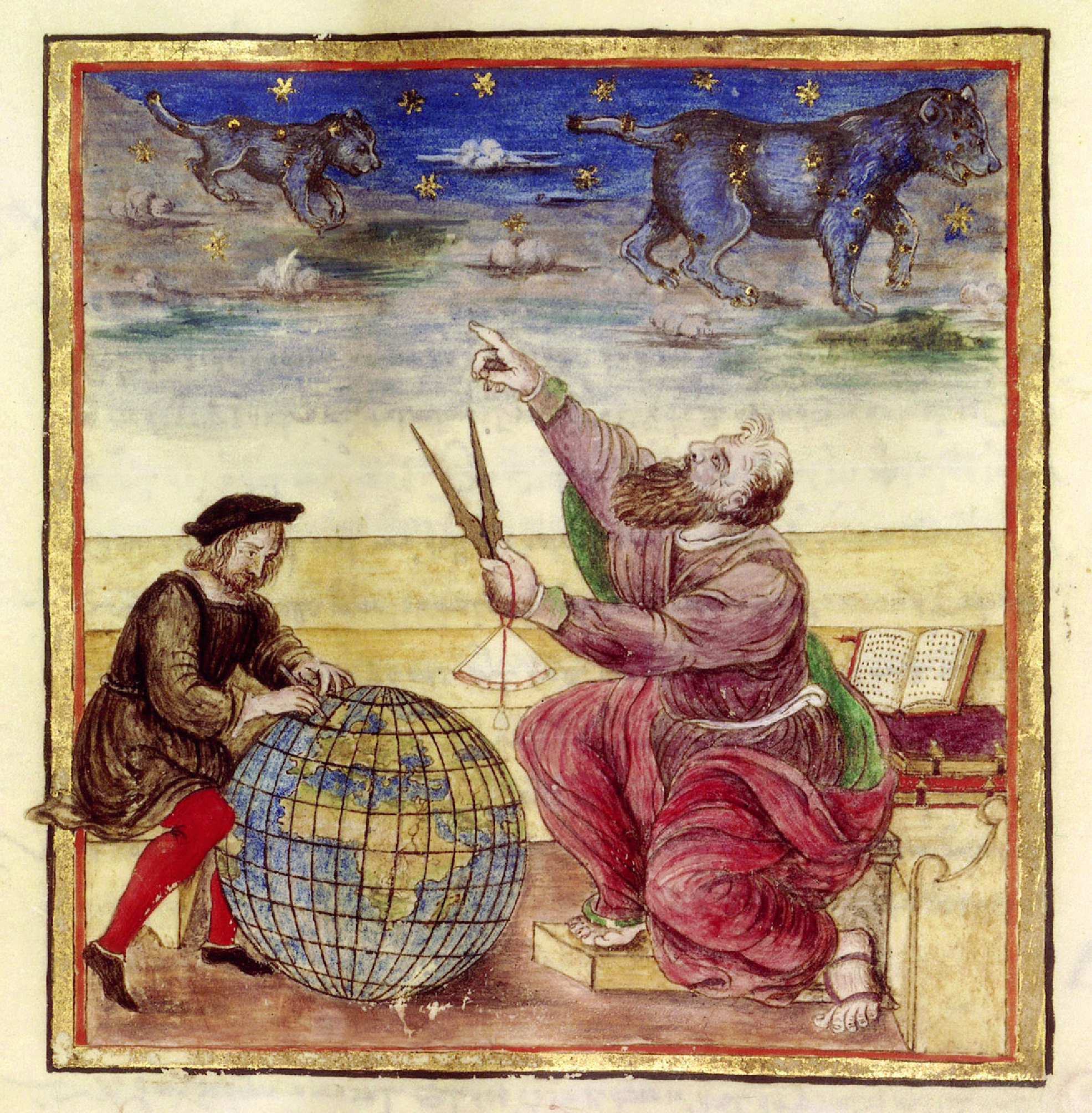 Our first and most important astronomical instrument is the eye. Until Galileo came on the scene, observers used simple tools and visual observations to record what they saw. Their drawings and detailed notes described the positions, movements, and brightness of objects in the sky. 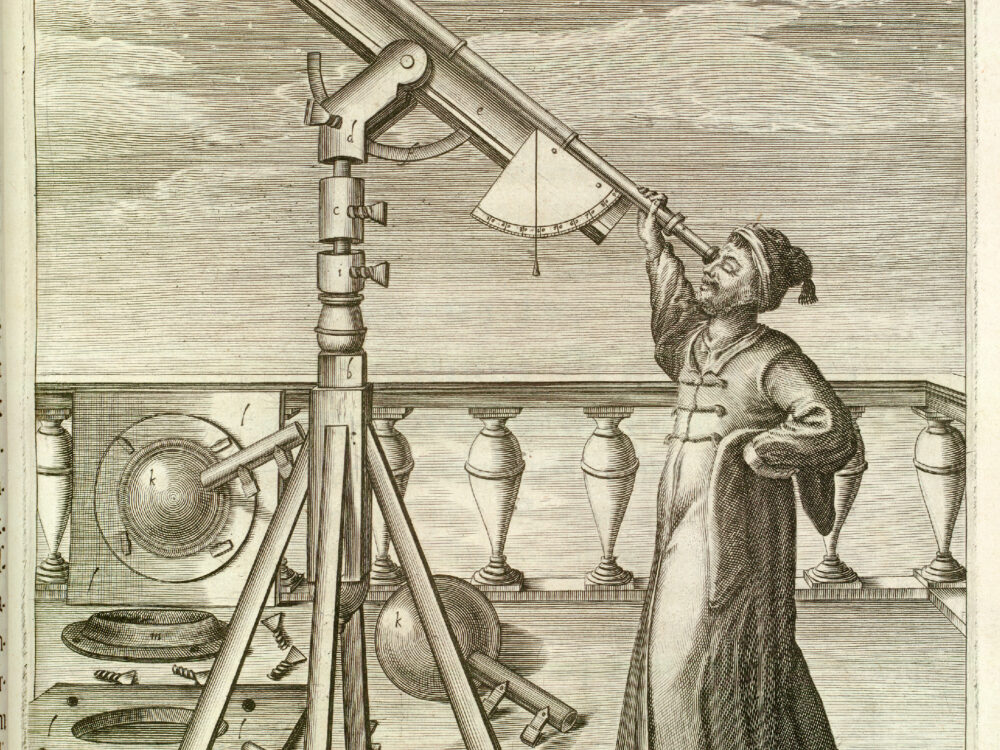 Astronomical records became more detailed as astronomers used telescopes to see the Moon and planets as worlds and the Milky Way as countless stars. 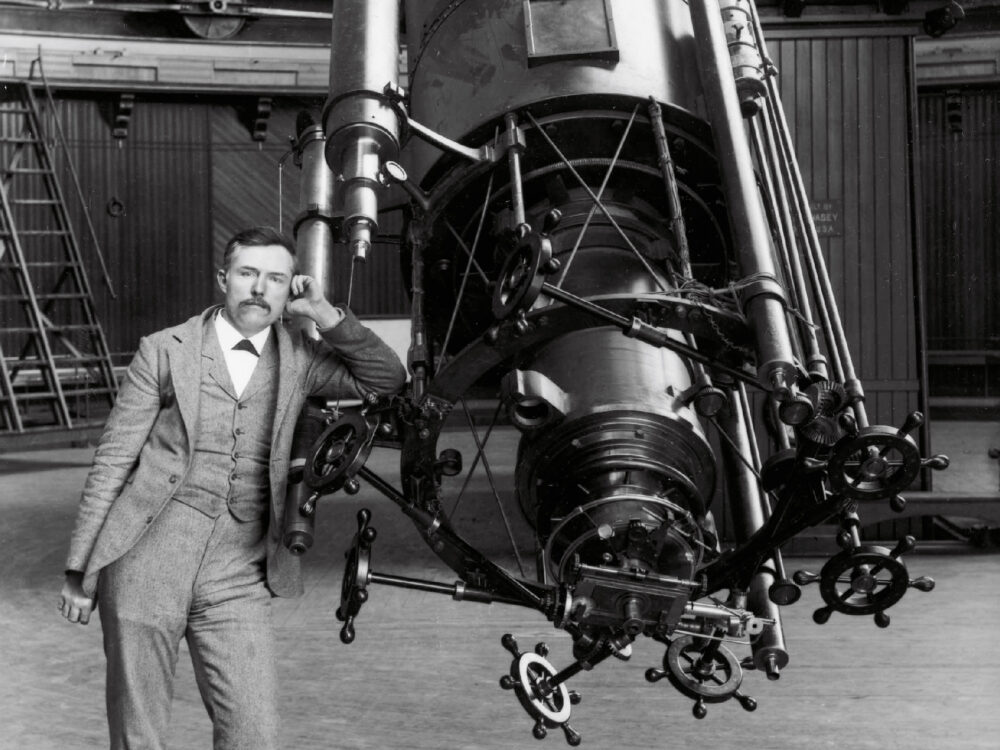 The micrometer was the ﬁrst instrument used on a telescope. It gave astronomers the ability to measure exact separations between objects in space. 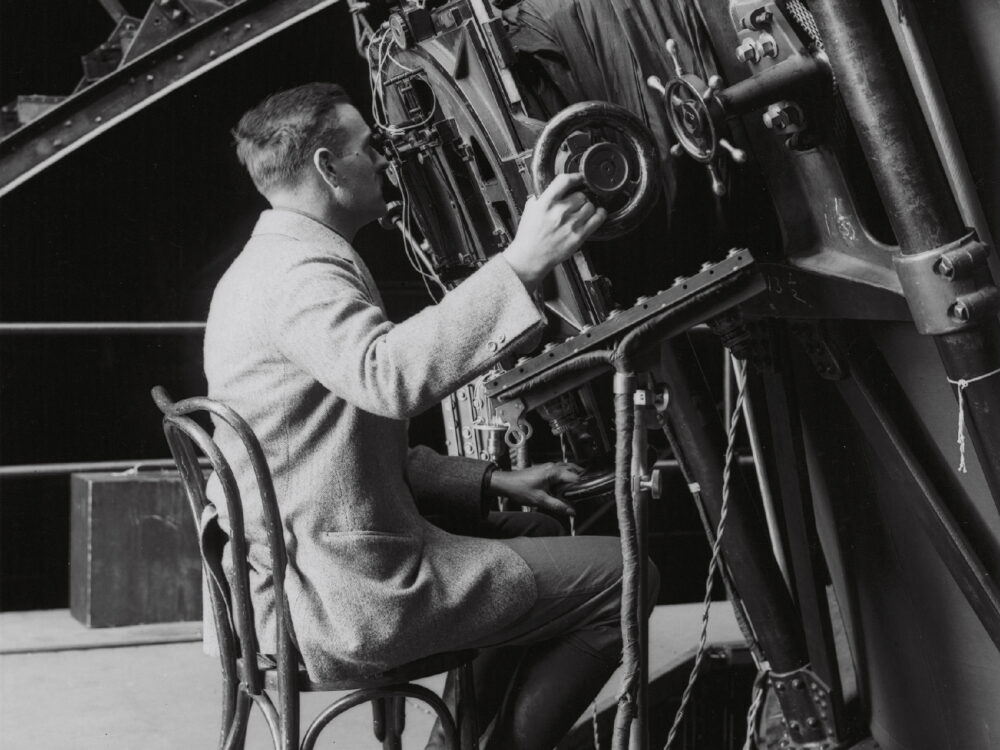 Thanks to ﬁlm cameras, astronomers replaced sketches with actual images of what they saw. Time exposures let them capture more light from celestial objects. 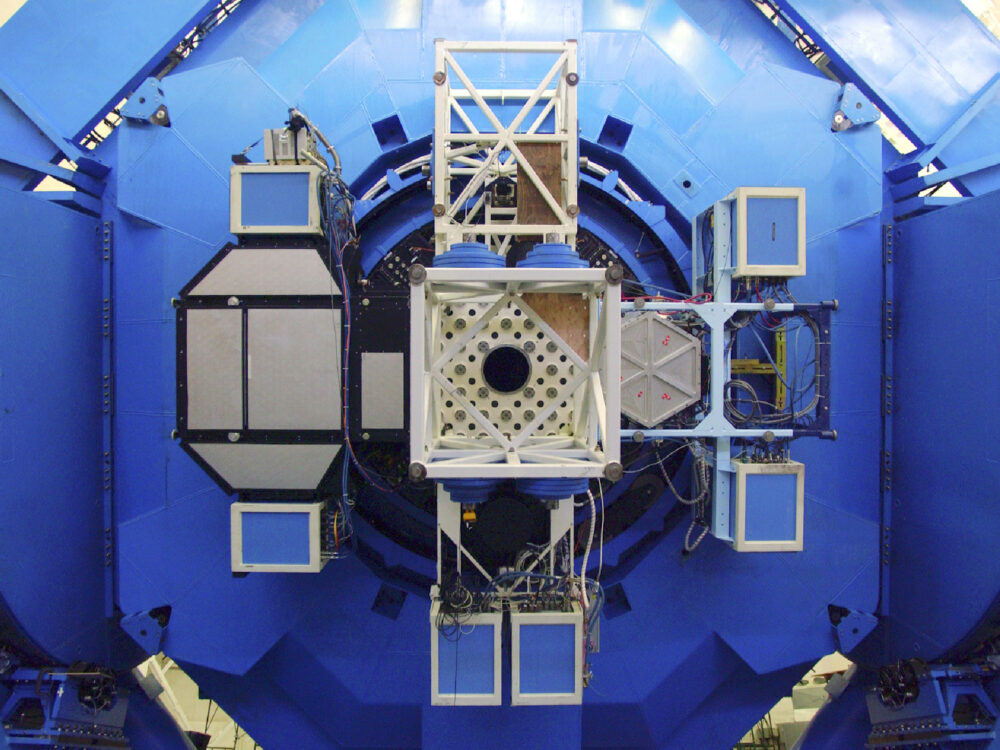 CCD cameras are data-collection machines. They are very sensitive and capture light from dim, distant objects in many different wavelengths. Nearly every imaging system in use at modern observatories has a CCD chip or camera at its heart. These give astronomers precise, high-resolution images and measurements.

Breaking Light Into Its Components

If you send sunlight through a prism, as Sir Isaac Newton did, you’ll see a rainbow of colors. This visible light is just a small part of the electromagnetic spectrum.

Today, astronomers study all the light streaming from objects in space. Their tools are spectrographs and spectroscopes, which break up light into its component wavelengths.

What a Spectrum Tells Us 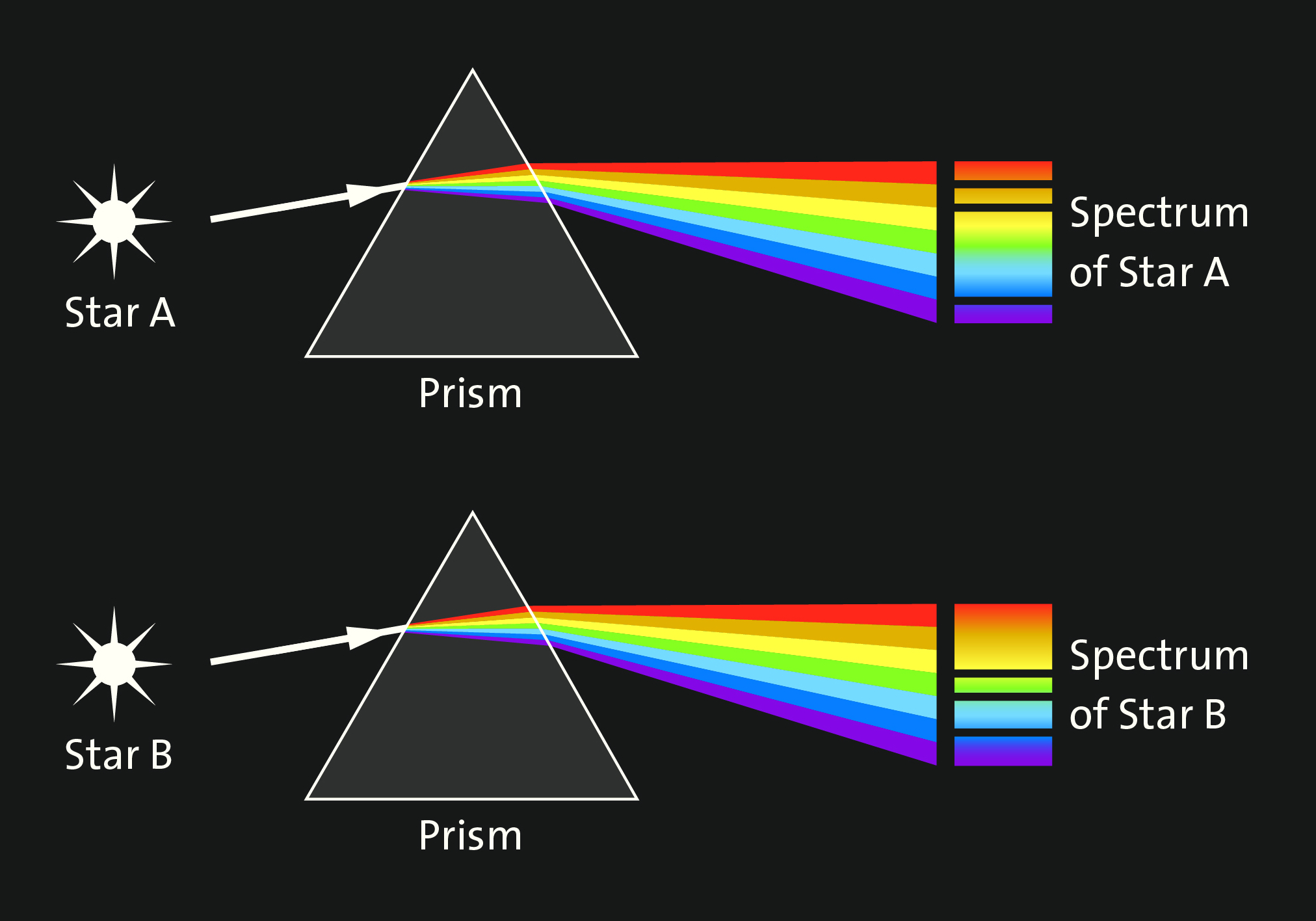 A spectrum of the light from an object indicates its temperature and the chemical elements it contains. The way the dark and light bars are arranged in a spectrum can also reveal the speed of an object and the direction in which it is moving. These spectral “fingerprints” help identify many physical characteristics of stars, planets, and galaxies. 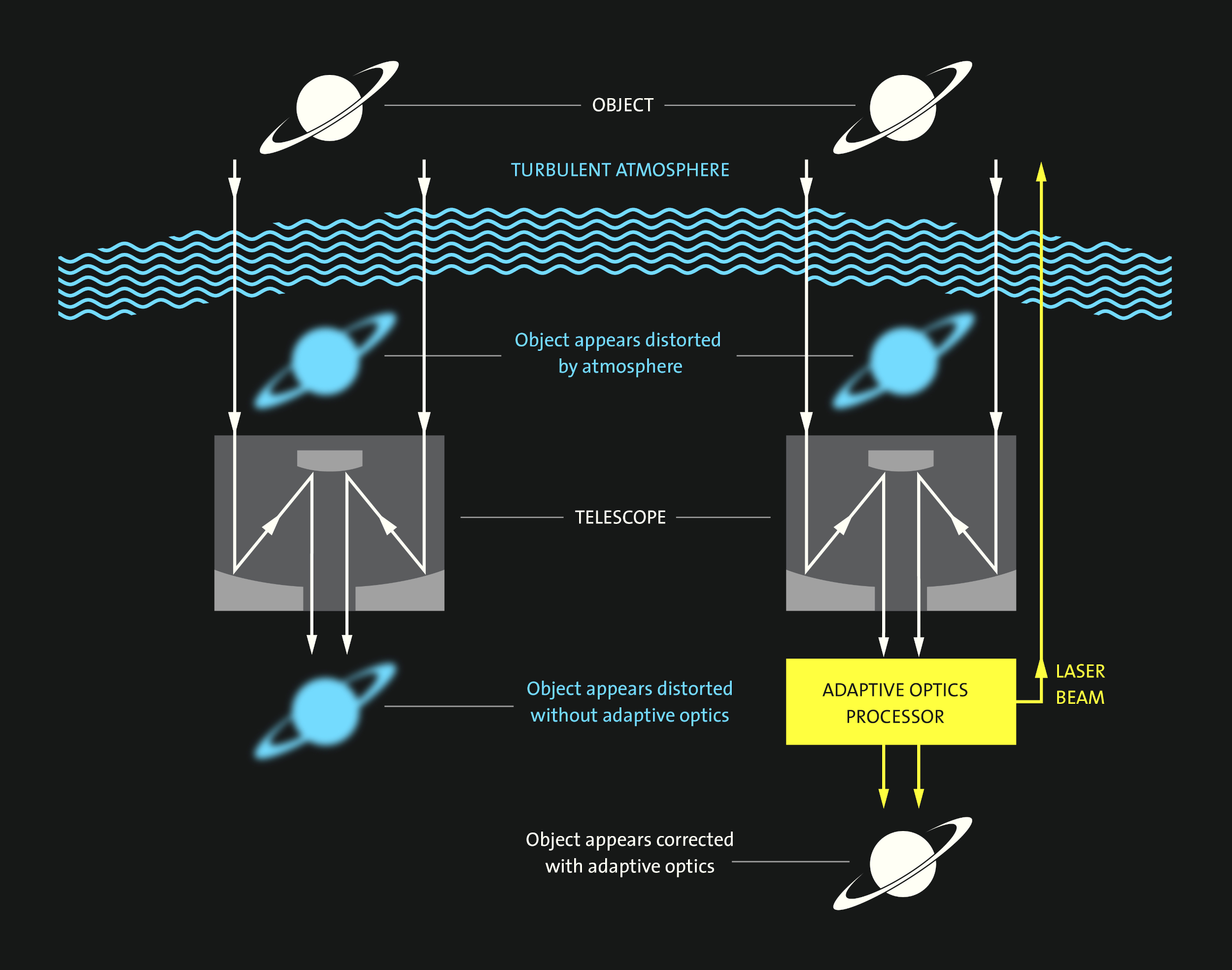 While Earth’s atmosphere makes life possible, it also gets in the way of astronomers who want to study objects in space. There are two ways to deal with this atmospheric blurring: put observatories in space above the atmosphere or add adaptive optics to telescopes on the ground.

The Result of Adaptive Optics 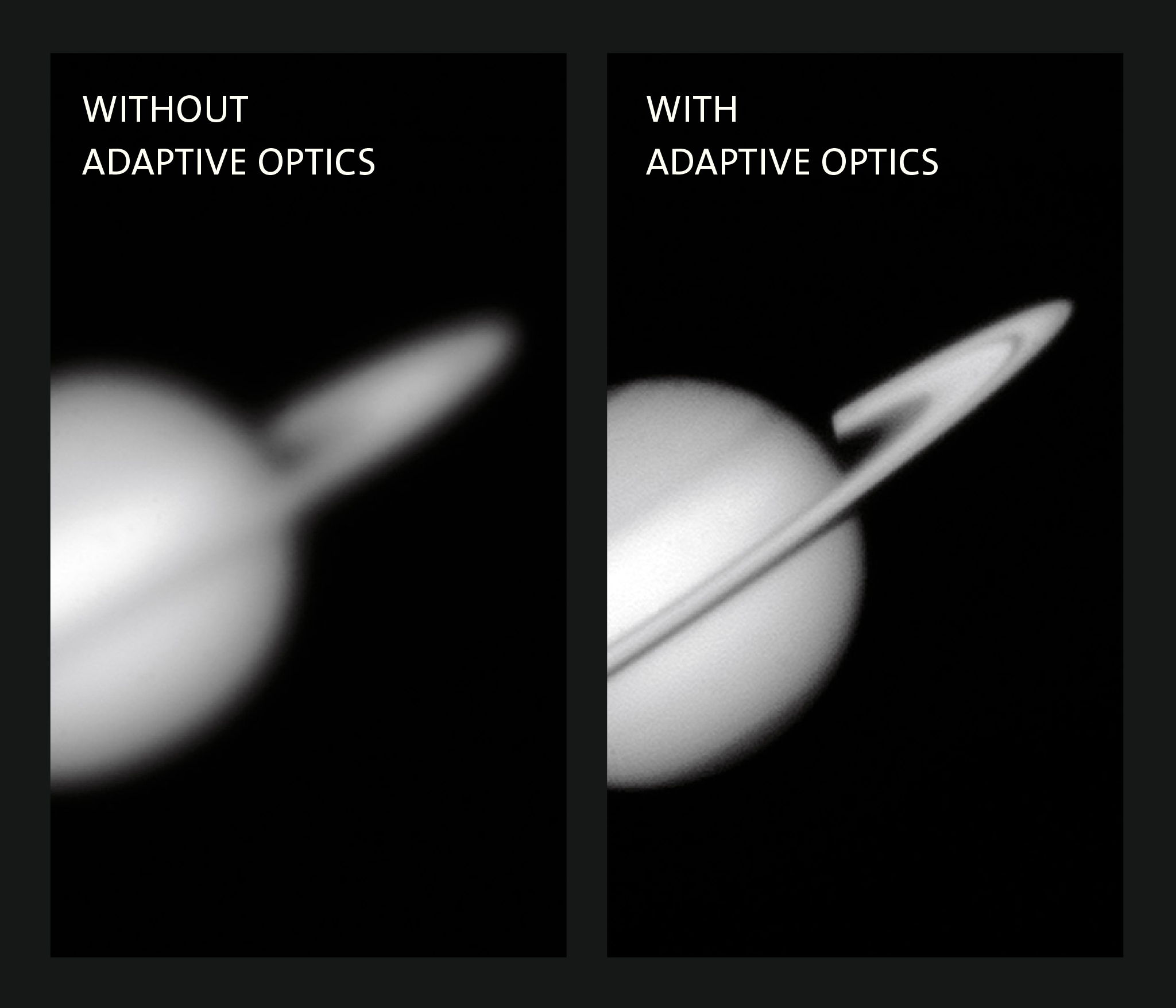 An adaptive optics system shoots a laser beam through the atmosphere. This creates an artificial “guide star” that the system uses to measure the distortion of our atmosphere. Information is then fed to a mechanism that makes constant, tiny adjustments to the mirrors to match the atmospheric distortion. The resulting image looks clearer and sharper, as if the atmosphere weren’t in the way. 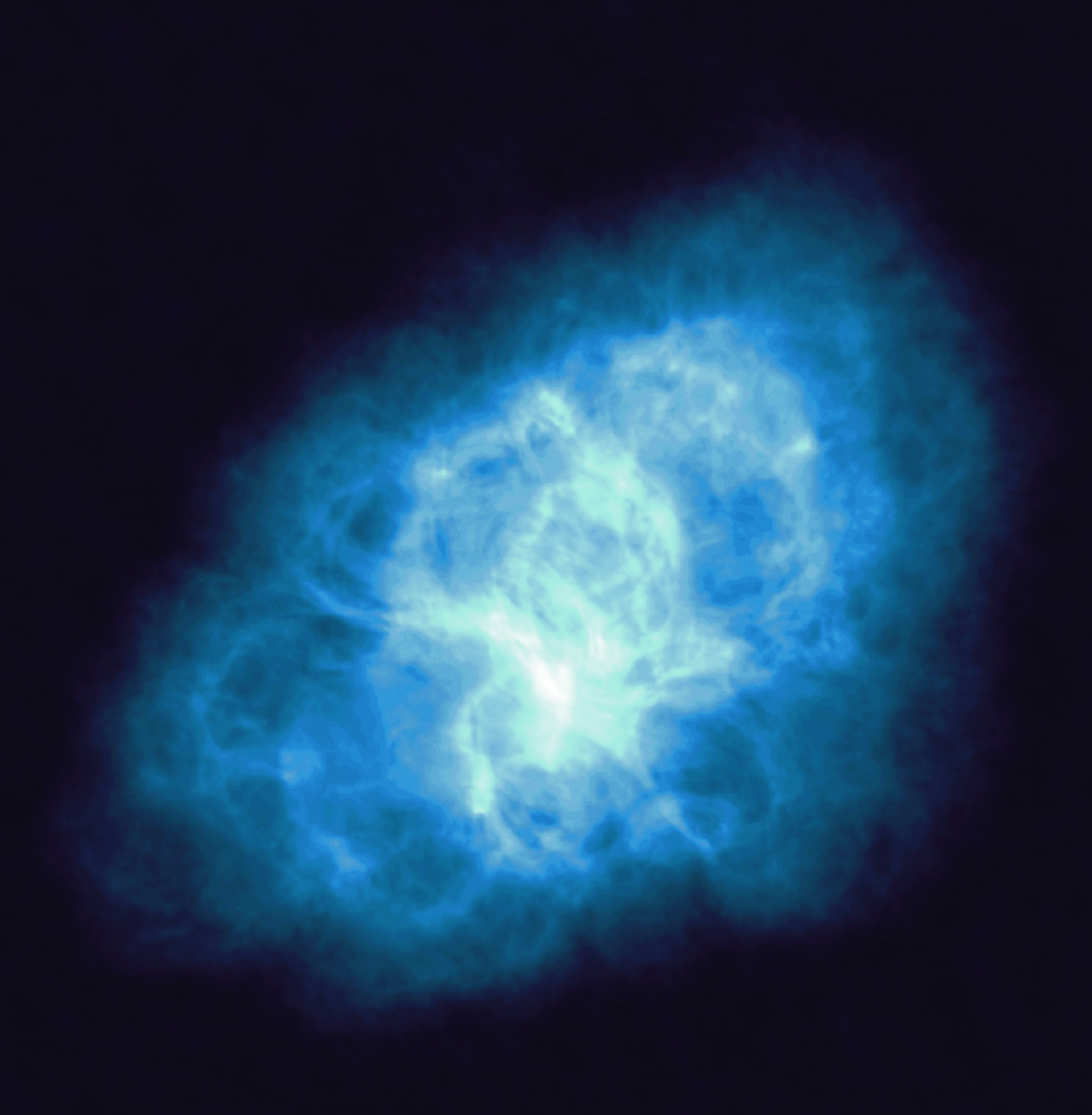 Sometimes a target is too far away or is one of many objects in a crowded field. This makes it difficult to observe. Even a large telescope may not provide a sharp enough view. To get clearer views of objects, astronomers want to build ever-larger telescopes. If this isn’t possible, they combine light from two or more telescopes in a technique called interferometry, as with the Crab Nebula radio image. 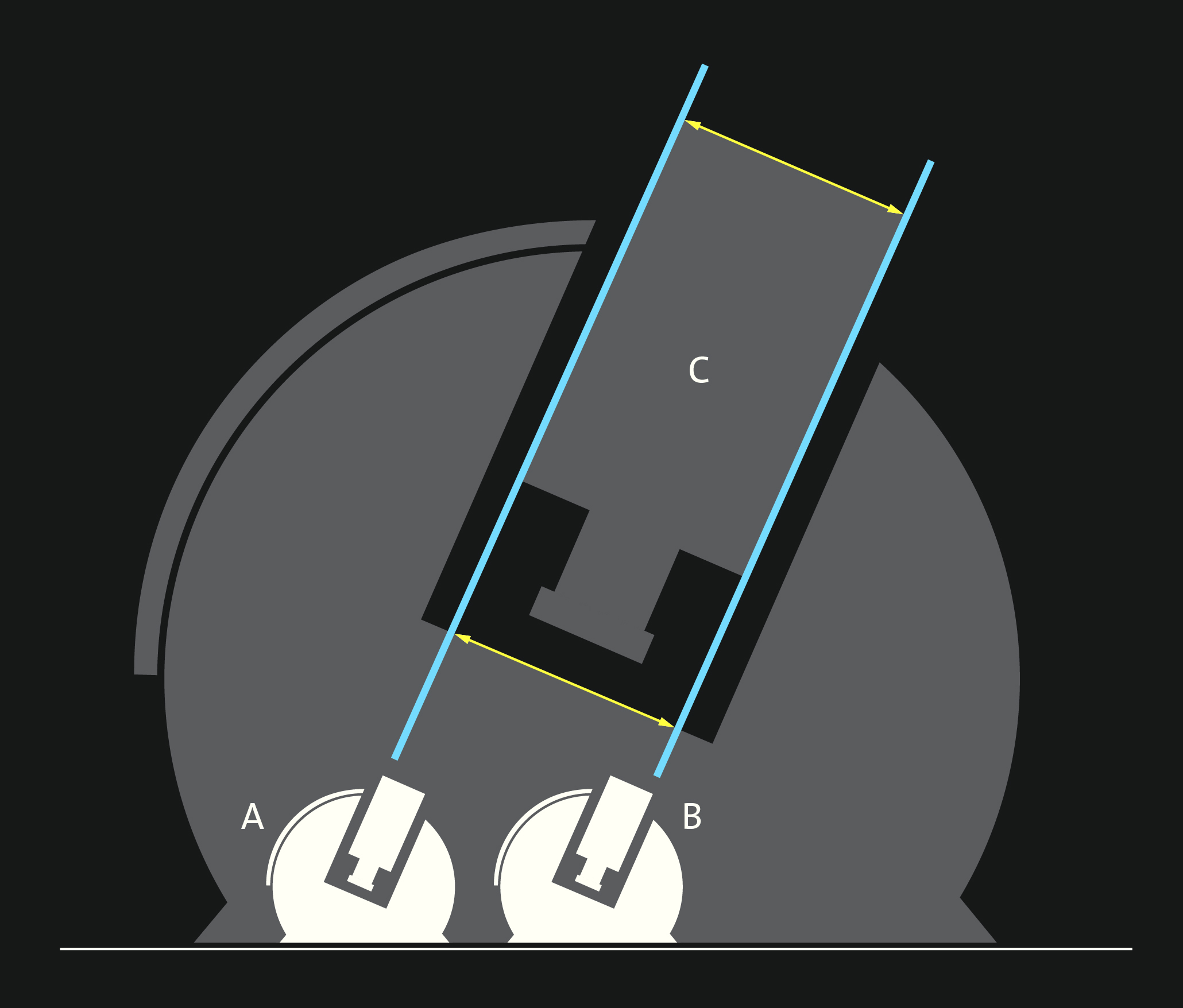 When multiple telescopes (A and B) are combined in an interferometer, the resulting super-observatory lets astronomers achieve the sharpness of a much larger telescope (C). They can use it to zero in on very small areas of the sky, like individual stars or the centers of galaxies. Interferometry is a technique that is used today with both optical and radio telescopes.