Griffith Observatory’s three solar telescopes bring the Sun directly to visitors in the west rotunda of the Ahmanson Hall of the Sky. On clear days, each of these telescopes provides a different real-time view of our local star, including sunspots and solar flares. The three beams of sunlight for the telescopes are focused into the rotunda by a triple-mirrored tracking device called a coelostat (Greek for ‘sky-stopper’), which is located above in the western dome of the building. The solar telescopes operate only during clear daytime hours.

A coelostat is one option used in solar observatories when moving a small tracking mirror is preferable to moving a large telescope attached to heavy equipment. Designed by Russell W. Porter, famed for his intricate cut away illustrations of the workings of the 200-inch Hale Telescope, Griffith Observatory’s coelostat solves the problem of feeding three different telescopes with sunlight, while delivering their images to three fixed displays in the west rotunda of the museum. The incoming light bounces off from one of three tracking mirrors, and is bounced up to one of three mirrors that are each aimed into three different instruments. The center beam passes through a telescope and a projecting lens, to another mirror, and displays the sun and its spots as a 21-inch wide image on a ground glass screen. The northern beam bounces into a spectroscope located in a pit beneath the museum floor, and back up to an eyepiece, through which a detailed view of the sun’s spectrum is visible. The southern beam reflects into a kind of telescope called a hydrogen-alpha filter. By looking through an eyepiece, the visitor will see that all but one specific shade of red has been filtered out. The sun’s energy is harmless at that wavelength, and the fluorescent hydrogen visible through it makes the turbulent plasma of the sun’s outer layer, the chromosphere, dramatically visible. 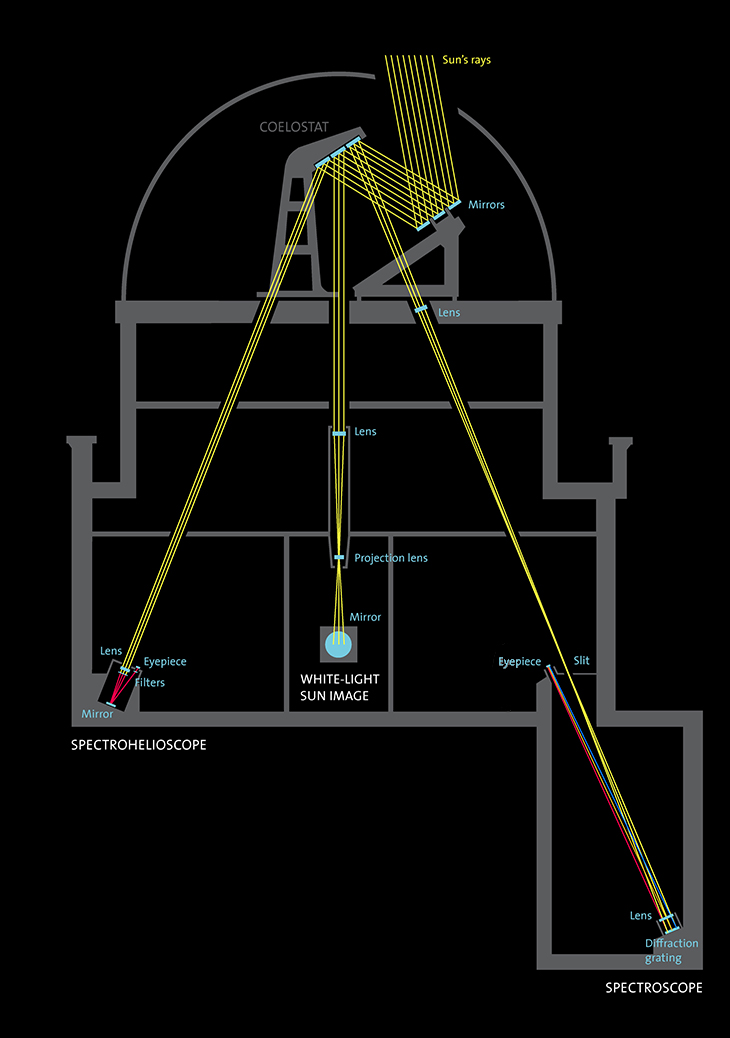 The west end of the Ahmanson Hall of the Sky is in the form of a rotunda which houses the three solar telescopes. On clear days, these provide the visitor views of different aspects of the sun. These are actual, live images that are brought in to the museum from a tracking device called a coelostat that is housed in the western dome of the building. Let’s take a closer look at the coelostat and the solar telescopes. 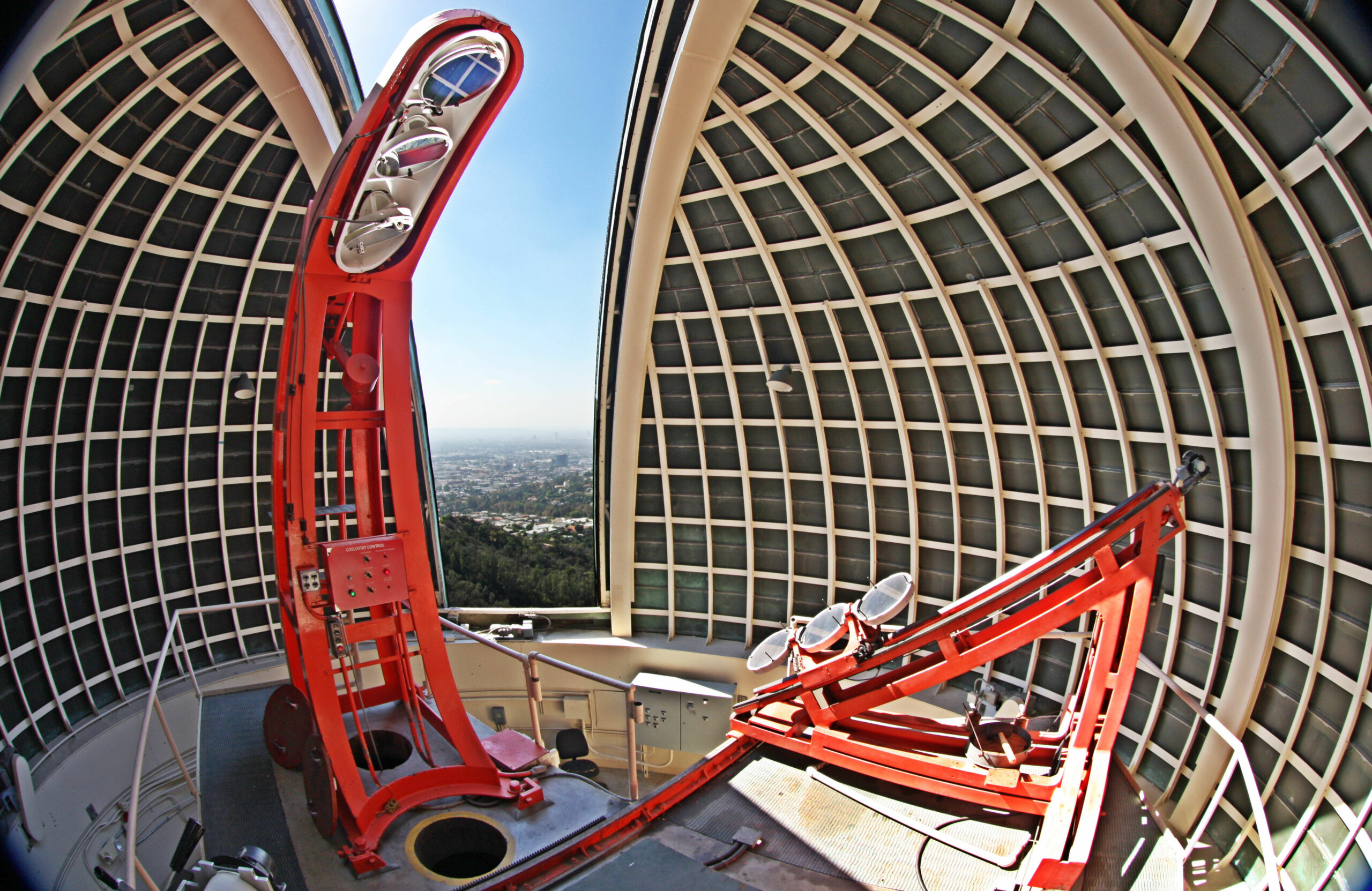 The 30-foot (9.1-m) diameter copper-sheathed dome on the west end of the building has shutters that open 8 feet (2.5 m) wide to admit light. The opening is moved as needed by turning the entire dome on tracks.

Light passing through the dome opening falls on three 13-inch (33-cm) diameter flat mirrors of the coelostat (Greek for “sky-stopper”). Coelostats are often used in solar observatories where moving small tracking mirrors is preferable to moving large telescopes attached to heavy equipment. The mirrors of the coelostat are aligned with a polar axis and turned at the rate necessary to keep the reflected image of the apparently moving sun stationary (half the rotation rate of the earth). Each of the mirrors sends a reflection to another flat 13-inch stationary relay mirror mounted on a tower which in turn reflects the sun’s image into one of the three stationary telescopes within the rotunda below.

Each telescope serves a different function. 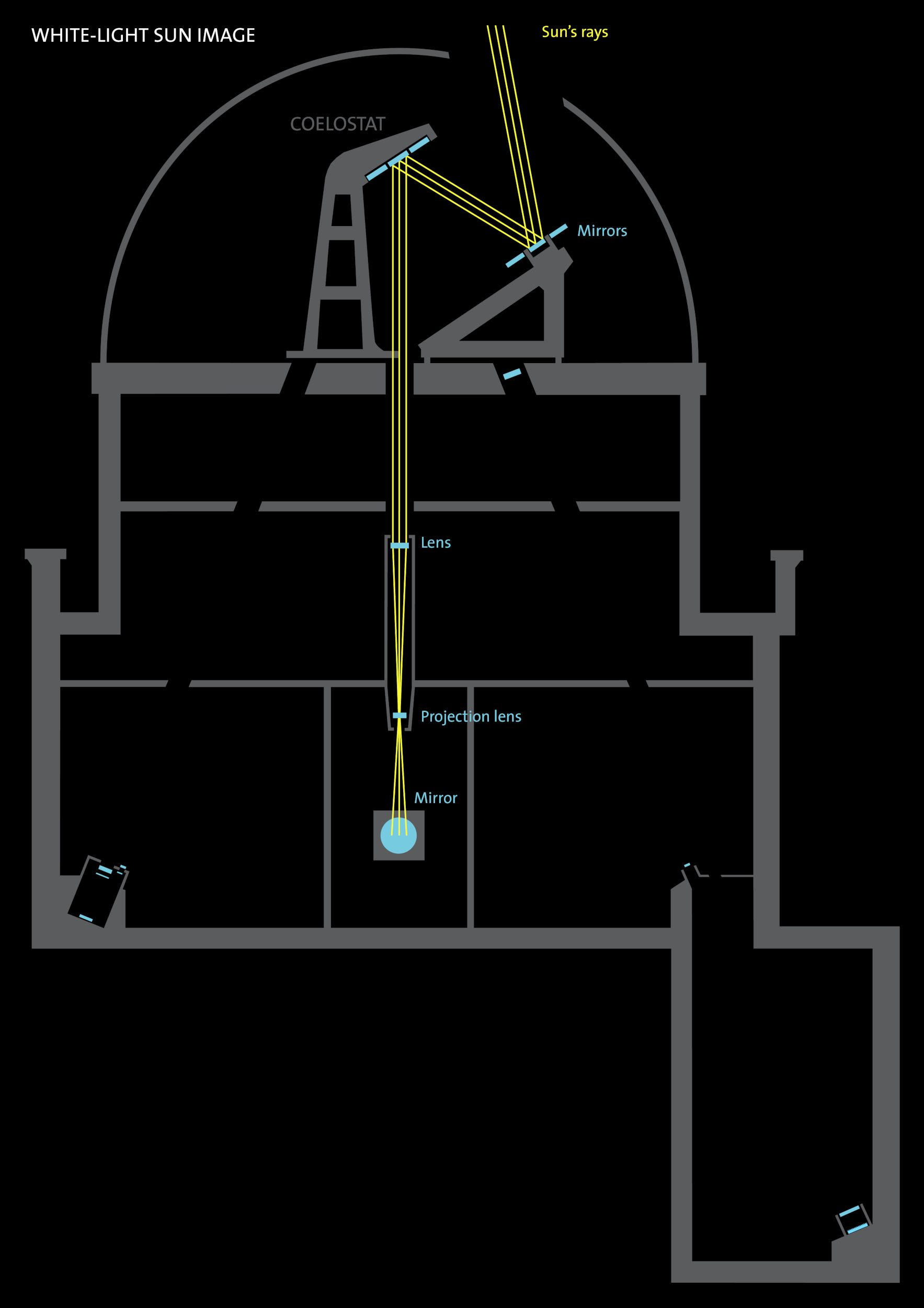 The center set of mirrors reflects light to an 8-inch (20-cm) diameter refracting telescope of 10 feet (3-m) focal length mounted vertically in the upper floors of the central portion of the solar telescope rotunda. The image passes through a projector lens, reflected off a tilted 17-inch (43-cm) diameter flat mirror, and is focused onto a ground glass rear-projection screen from which it is visible from the museum as a 21-inch (53-cm) diameter disk, allowing many visitors to view sunspots simultaneously. Learn more about the Live Image of the Sun. 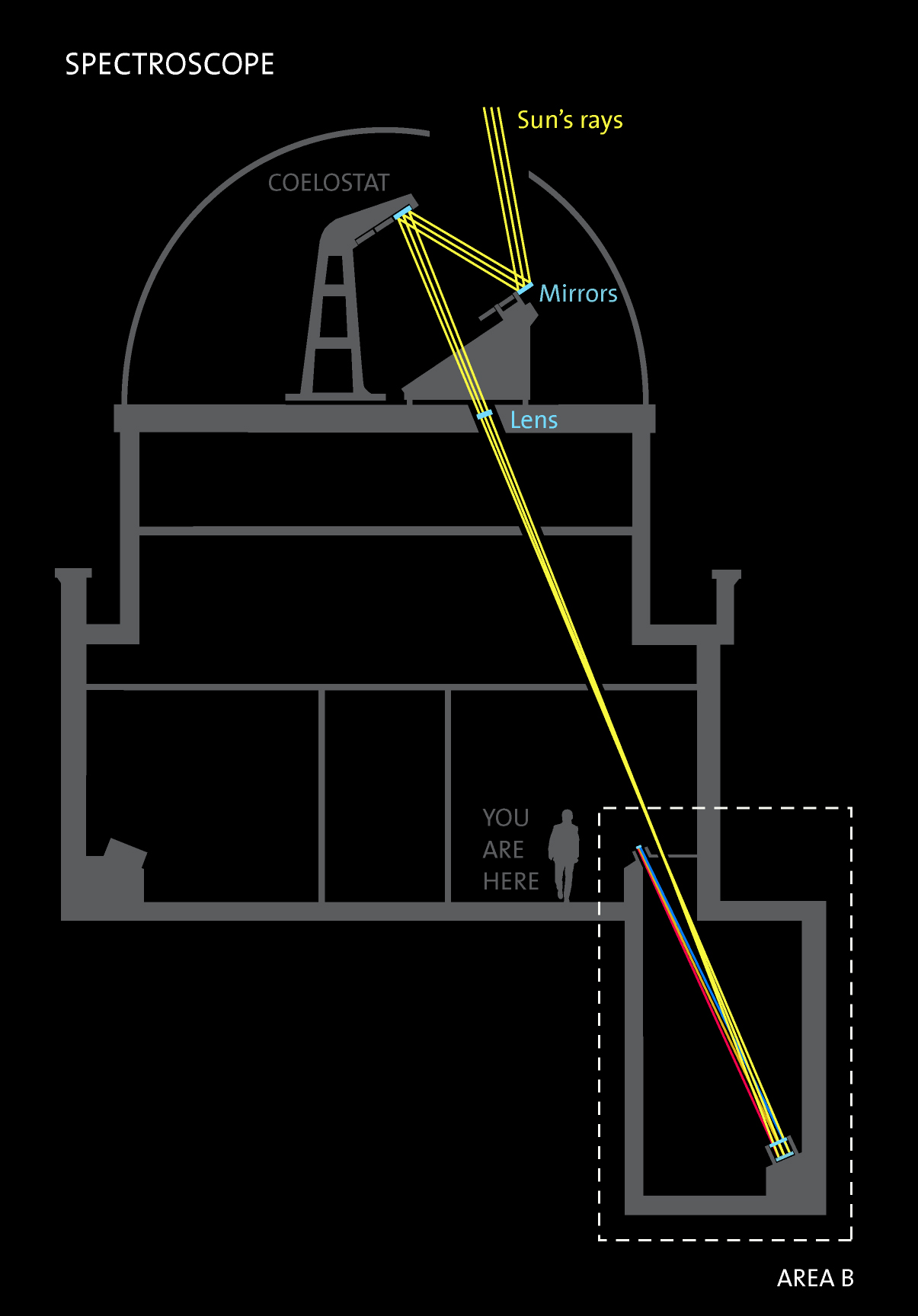 An eight inch (20-cm) objective lens of 30-feet (9.1-m) focal length receives light from the northernmost coelostat mirror and focuses the sun’s image onto a brass slit at the north side of the rotunda’s museum level. A narrow ribbon of light admitted through the slit passes nearly 20-feet (5-m) underground, passing though a collimating lens (known as a Littrow lens) which is located about a foot (30-cm)above a reflection grating on which are ruled more than 15,240 parallel grooves per inch (600 lines per millimeter). The diffracted light produces a spectrum that is reflected back up through the Littrow lens, and is brought to focus by an eyepiece on the museum level, through which the visitor can observe a detailed view the dark Fraunhofer absorption lines, revealing the presence and identities of the various elements comprising the outer regions of the sun. By pushing a button near the eyepiece, the visitor may scan most of the visible spectrum. A wall mounted transparency allows identification of many of the spectral features seen through the eyepiece. Learn more about the Spectroscope. 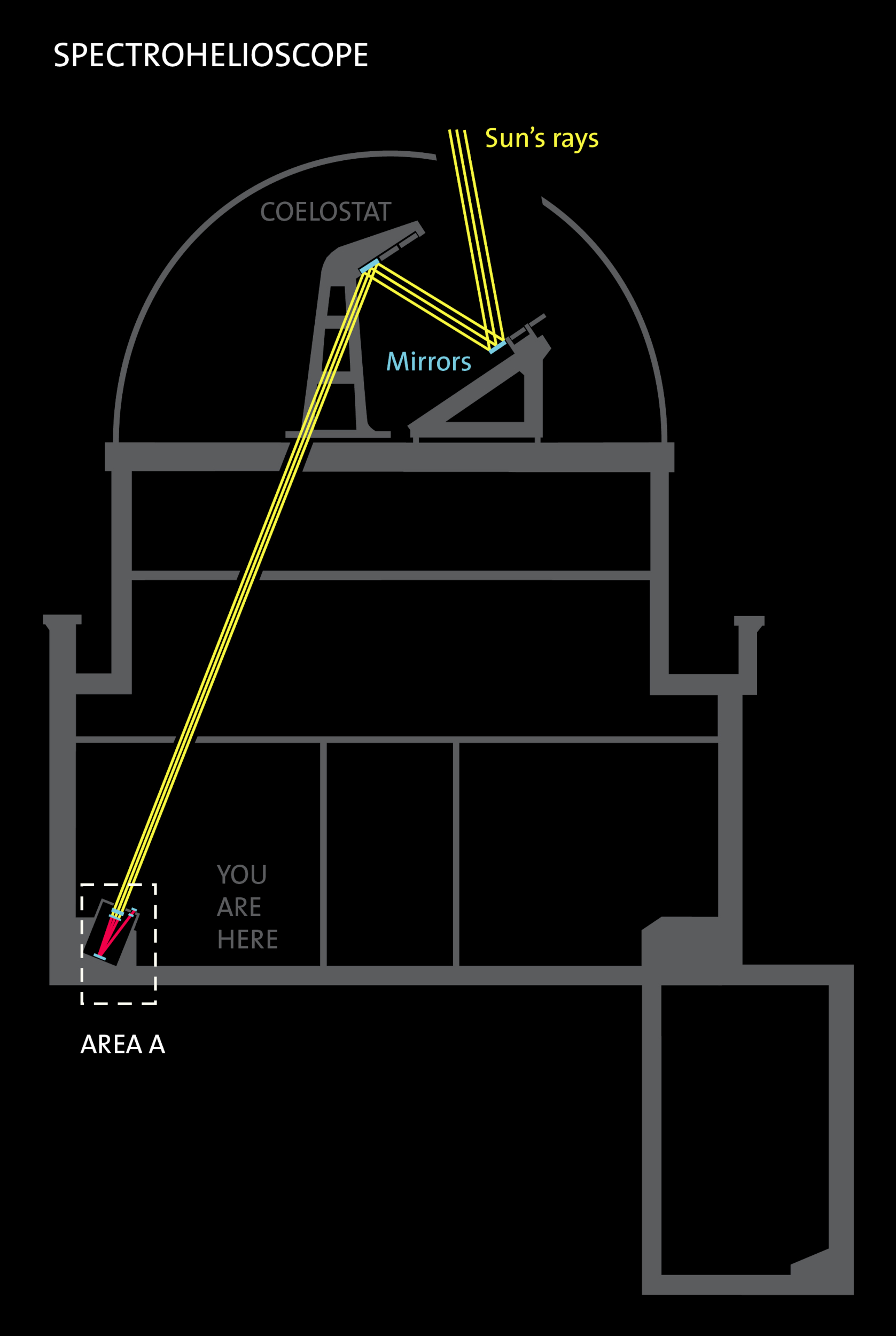 The southernmost coelostat mirror sends the sun’s light to a small folded refracting telescope contained within the display case on the museum floor. Before reaching the eyepiece, the image passes through an interference filter to isolate the precise red spectral wavelength produced by fluorescent hydrogen gas in the outer layer of the sun’s disk known as the chromosphere. This “hydrogen-alpha” wavelength corresponds to the same frequency that is absorbed by hydrogen atoms deeper within in the sun. By restricting the view to only the hydrogen alpha portion of the spectrum, the blinding light of the disk is hidden by being absorbed by atoms in the bright incandescent disk of the sun the photosphere), and only light produced by the fluorescent atoms in the sun’s lower pressure outer layer (the chromosphere) are visible. It is this layer that is torn and twisted by the turbulent magnetic fields surrounding sunspots and flares, often permitting spectacular eruptions to be observed through the eyepiece of the spectrohelioscope.

The solar telescopes operate only during clear daytime hours. In addition to the three solar telescopes, the rotunda that houses them is illustrated with spectacular photographs of the sun taken by the great solar observatories on earth and in space. Learn more about the Spectrohelioscope.

The idea of including coelostat in Griffith Observatory so that the public could view a projection of the sun’s disk and a direct view of the sun’s spectrum could be viewed was that of the Observatory’s donor, Col. Griffith J. Griffith (1850 – 1919) – presumably after visiting Mt. Wilson Observatory (ca. 1910). Less than a decade after Griffith’s death in 1919, the founder of Mt. Wilson Observatory, George Ellery Hale (1868 – 1938), invented a device – the spectrohelioscope- for viewing the eruptions in the outer layers of the sun that previously could only be observed in the fleeting moments of total solar eclipses. The spectrohelioscope was added as a feature when plans for the observatory began to drawn up by Hale and his scientific colleagues when approached for help by Griffith’s trust committee in 1930. 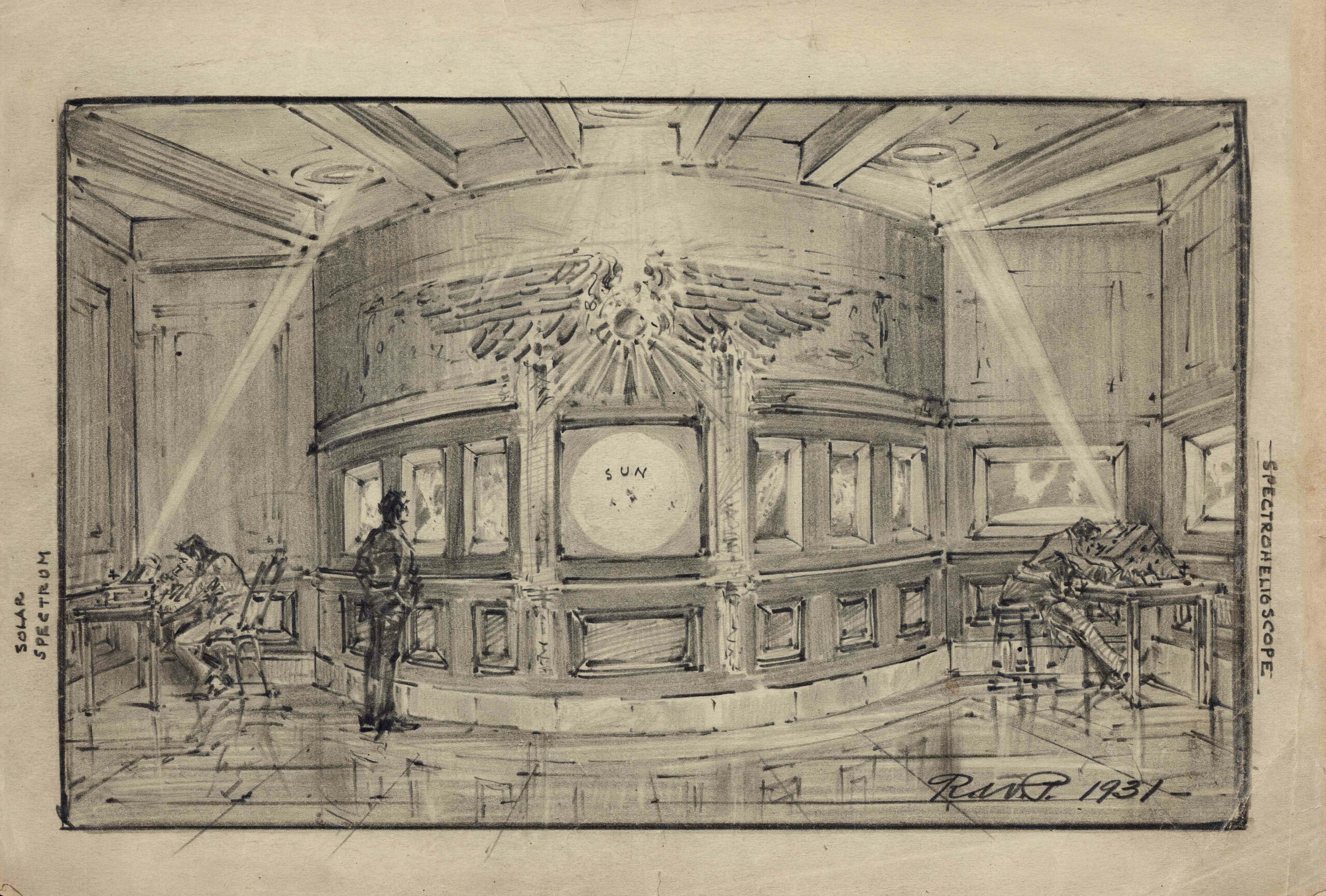 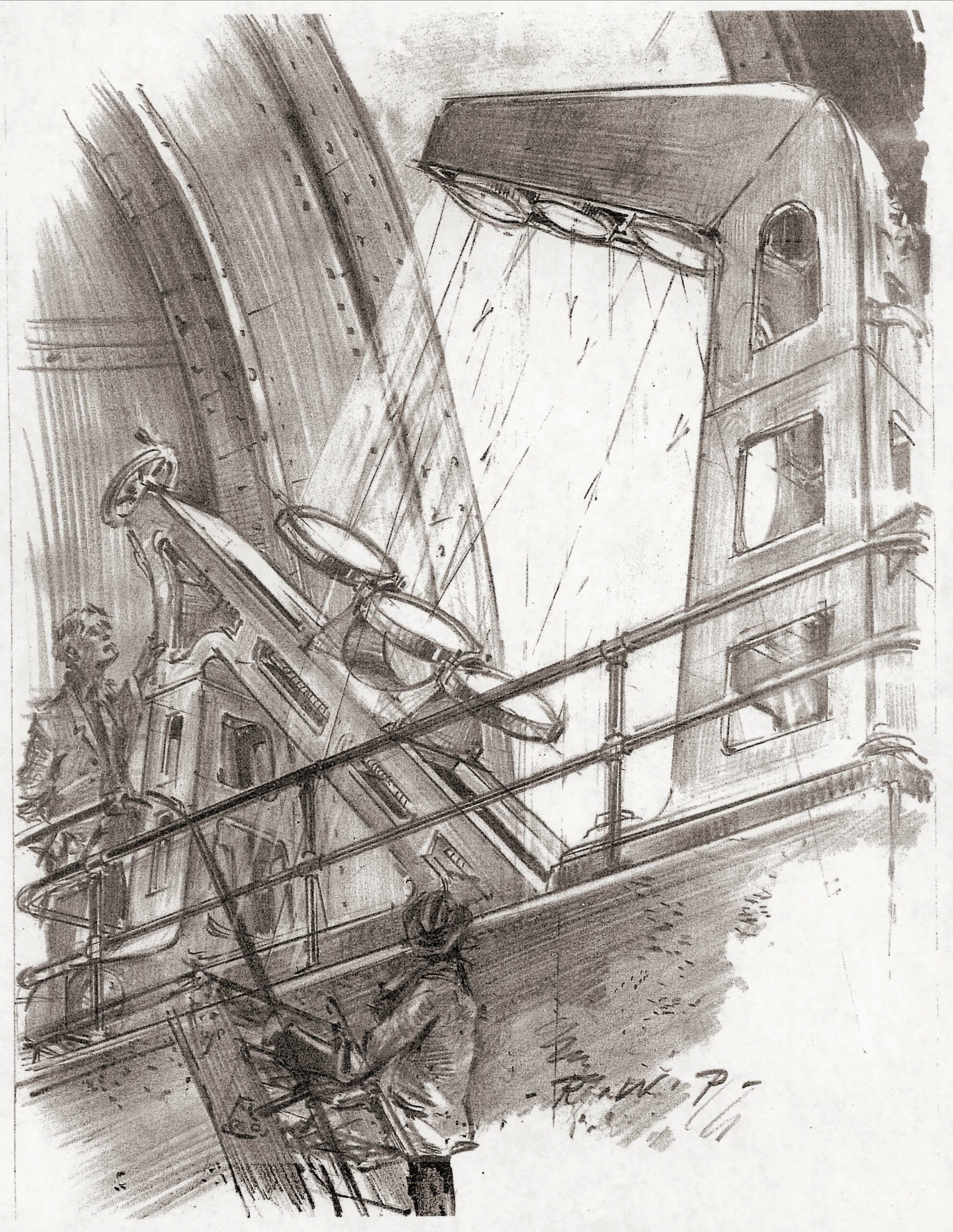 The challenging task of creating a coelostat to feed the three separate telescopes fell to Russell W. Porter (1871 – 1949), one of the important founders of the hobby of telescope making, and an important instrument designer, architect, and illustrator connected with the 200-inch telescope project started by Hale in 1928. Porter’s 1931 concept for Griffith Observatory resulted in both the moving tracking mirrors and the relay mirrors being mounted in parallel on separate polar axes, an innovation that subsequently affected the designs of coelostats at Caltech’s Astrophysical Laboratory and at the McMath-Hulbert solar observatory at the University of Michigan. The detailed working drawings of Griffith’s coelostat were made by E.C.Nichols of Mt. Wilson Observatory, and the device was fabricated by the Gaertner Scientific Co. of Chicago in 1935. As is true of the general layout of Griffith Observatory and many of its architectural features, the original concepts for the rotunda of the solar telescope were developed by Porter and his colleagues at Caltech and followed by the architectural consortium of John C. Austin and Fredrick M. Ashley.

While the purposes of the solar telescopes are the same today as they were in 1935, there have been some interesting variations and additions to their use since they were first installed.

From the late 1930s and until World War II, it was decided that the central telescope of the coelostat would be used for moon viewing at night. After sunset on evenings when the moon was visible, the hinged frame of the solar projection screen was opened and an enormous eyepiece was aimed through the opening so that the moon could be viewed from the rotunda, freeing the 12-inch Zeiss telescope in the east dome for observing other celestial objects. 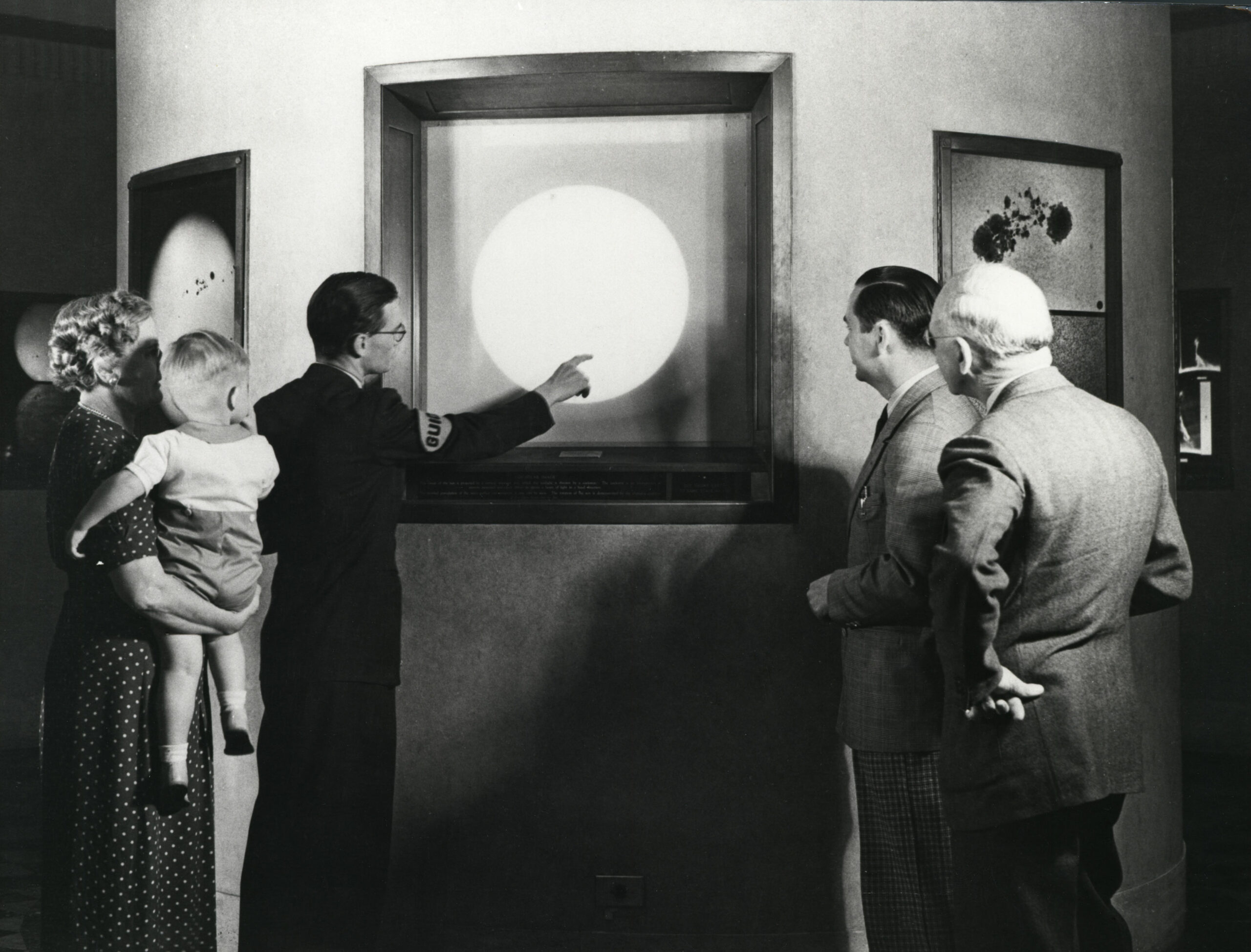 In the 1940s a 5X7-inch camera was added to the room above the museum ceiling so that light can be diverted from the spectroscope objective to photograph the entire solar disc. This camera was used by the Observatory’s staff to photograph sunspots, solar eclipses, and other solar events though 2001.

The Hale spectrohelioscope was originally installed in a 12-foot-deep pit under the south side of the rotunda, and used a simple 8-inch (20-cm) objective of 18-feet (5.5-m) focal length in the middle story of the building. Using whirling prisms the device depended on the persistence of vision to give the illusion of a continuous image. An improved spectrohelioscope using optical interference was installed in the 1950s, and in turn the filter and telescope was replaced in the 1980s by a compact and efficient commercial Daystar interference filter and a 40-mm refractor lens, all contained within the exhibit on the museum floor.

As part of the Observatory’s Renovation and Expansion, two small telescopes and television cameras were added to the southern beam of the coelostat. These provide live televised images to a wheelchair accessible station in the Ahmanson Hall of the Sky.